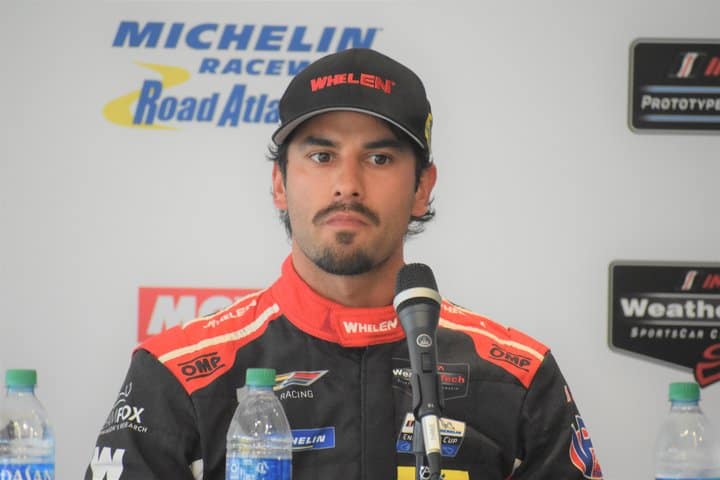 Action Express Racing’s Felipe Nasr continued his quick form Friday afternoon (Oct. 11) by winning the pole for Saturday’s Motul Petit Le Mans at Michelin Raceway Road Atlanta with a lap at 133.573 mph.  It is a new track record for the 2.54-mile circuit and Nasr’s first pole in the IMSA WeatherTech SportsCar Championship.  The No. 31 Cadillac DPi-V.R. has been fastest in three of the four practice sessions this weekend, in addition to qualifying

“Finally!” Nasr said during his post-qualifying press conference. “It’s great to get a pole position, after all I’ve spent, what, two years in the serie. I’ve been close a few times, but never got the job done. It’s a nice place to do it here at Road Atlanta. I have to say I was pretty happy with the lap. The track, as I’ve said, has a lot of grip right now. Michelin has done a great job here, with this [tire] structure and the track itself. I felt like compared to last year, everything just felt much quicker  with the tires. It’s just awesome to drive.”

Nasr was quickest early on in the session, but only just barely. At one point, the top three cars were within four-thousandths of a second of each other. Then, Nasr put down the pole time that no one could beat.

LMP2 saw Performance Tech Motorsports’ Kyle Masson win the class pole with a lap at 129.295 mph, a lap that would have been good enough for fourth on the grid last year. This year, it’s only good enough for 11th. Masson’s lap was one-eighth of a second faster than PR1 Mathiasen Motorsports’ Matt McMurry.

GT Le Mans was very, very close. When the dust cleared, Risi Competizione’s James Calado ended up with the class pole with a lap at 120.890 mph. This lap was six-hundredths of a second faster than Corvette Racing’s Antonio Garcia. BMW Team RLL’s Philipp Eng was third, followed closely by Porsche GT Team’s Laurens Vanthoor. Ford Chip Ganassi Racing IMSA’s Joey Hand was fifth. All nine cars in class broke the previous class record and were separated by less than seven-tenths of a second.

The GT Daytona class saw the session’s only red flag in the opening minutes. On his first flying lap, Turner Motorsport’s Robby Foley, who had just competed in the IMSA Michelin Pilot Challenge FOX Factory 120 prior to the session, went too hot into the chicane and buried the car into the gravel trap. The car was not significantly damaged, but it took long enough to get the car out that getting the minimum 10 minutes of green-flag action was actually an issue.

A couple of extra minutes were tacked onto the session in order to guarantee that the session would be official. In that time, Montaplast by Land-Motorsport’s Ricardo Feller turned in an excellent lap at 115.476 mph to win the provisional pole. However, there are very strict rules in IMSA regarding what can be done during a red flag in qualifying: Absolutely nothing. One of the No. 29 team’s crewmembers opened the driver’s door during the red flag. That was more than enough to have all of Feller’s laps in qualifying disallowed.

The penalty elevated Paul Miller Racing’s Corey Lewis to the class pole, his second in a row, despite being a third of a second slower than Feller. Precision Performance Motorsports’ Shinya Michimi was right behind Lewis, but lost all of his times due to a similar illegal touch of the car during the red flag. That elevates Riley Motorsports’ Ben Keating to second in class for the start, one-eighth of a second slower than Lewis. Scuderia Corsa’s Jeff Westphal will start third, followed by the Acuras of Justin Marks and Christina Nielsen.

The Motul Petit Le Mans is scheduled to go green at 12:05 p.m. ET Saturday afternoon. TV coverage will begin live on NBC at Noon ET Saturday and stay there for three hours. Coverage moves to NBCSports.com and the NBC Sports App at 3 p.m. and will stay there through 5:30.  Once Monster Energy NASCAR Cup Series qualifying at Talladega is over, the race will be on NBCSN to the finish.