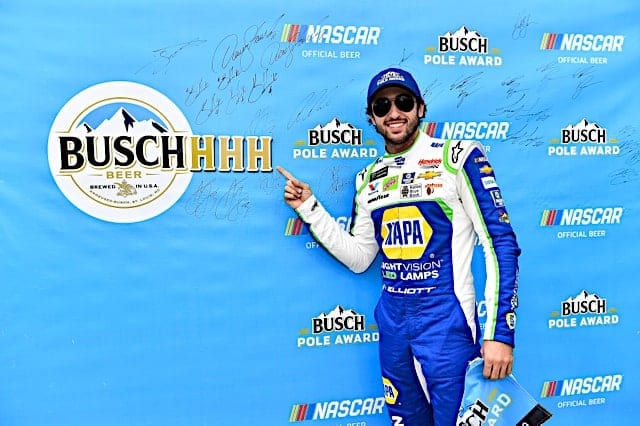 After a wild finish in the Gander Outdoors Truck Series race earlier in the afternoon, which delayed the start of Monster Energy NASCAR Cup Series qualifying, Chase Elliott won the pole for Sunday’s 1000Bulbs.com 500 at Talladega Superspeedway as Hendrick Motorsports locked down the first two rows.

Elliott piloted his No. 9 Camaro to the top of the leaderboard with a qualifying lap of 192.707 mph.

He was followed by teammate Alex Bowman in second at 192.552 mph. In third was another teammate in William Byron with a speed of 192.258 mph. In fourth was the fourth HMS driver, Jimmie Johnson at 191.566 mph.

"We all know what tomorrow brings."

A #BuschPole today, but eyes on a bigger prize tomorrow for @chaseelliott. pic.twitter.com/Elj5FAyiJZ

Rounding out the top five was Aric Almirola of Stewart-Haas Racing, who clocked in at 191.551 mph in his No. 10 Mustang.

Of the rest of the playoff drivers outside the top 10, Kyle Larson was 12th, Kevin Harvick 15th, Martin Truex Jr was 18th, Kyle Busch was 26th and Denny Hamlin failed to record a time after his engine failed.

Death, taxes and HMS qualifying well at RP tracks.
Look it up.
Rarely translates into wins.