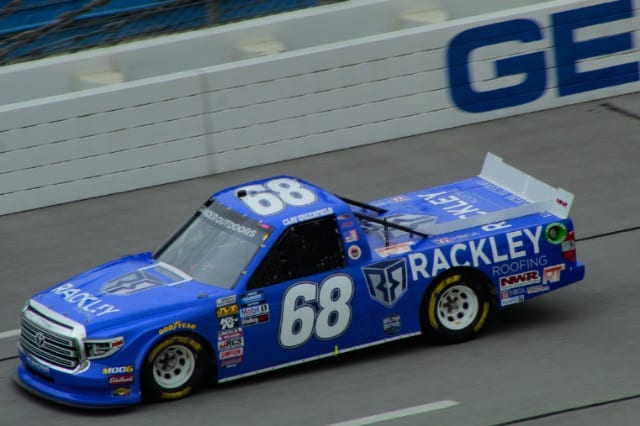 Clay Greenfield isn’t seen very often around the NASCAR Gander Outdoors Truck Series garage, but when he is, he always seems to be hovering around the front of the pack. Saturday’s Sugarlands Shine 250 at Talladega Superspeedway was no exception.

Greenfield didn’t turn many heads during qualifying, but during the race and within the draft, he was running, and sometimes ou-unning, some of the higher-dollar teams in his No. 68 Toyota.

However, being in the middle of the field leaves one vulnerable to the Big One, and that was exactly what happened to Greenfield.

Slammed and pinned against the outside wall by a spinning Ross Chastain in a 10-truck incident, he was checked and released from the infield care center and relegated to a 24th-place finish.

That has become the norm for Greenfield, though, who has in the past run well during the race, but would either experience engine issues or wind up involved in an accident.

“It’s what I keep telling someone,” Greenfield told Frontstretch. “Every time we’ve been here, we’ve either been in a wreck and the times we haven’t been in a wreck we have engine trouble three different times. One of these days, the whole averages will catch up and we’ll go win one of these things. We always have a good piece, we put on a good show, got Rackley Roofing some good exposure today and I guess we’ll regroup and get ready for Daytona.”

Greenfield seems to find his way toward the front during these superspeedway races with a team that is run in a small town northwest of Nashville. With a team that only runs a handful of races each year, Greenfield runs very well and with a minimal budget behind him.

“It’s impressive,” added Greenfield. “We definitely should be proud of what we accomplish. When you look at dollar-to-dollar there’s no way we should be running as good as we are, so we feel blessed for that. We’ll be at Daytona, and depending on how things go we might be able to get one more truck race in.”