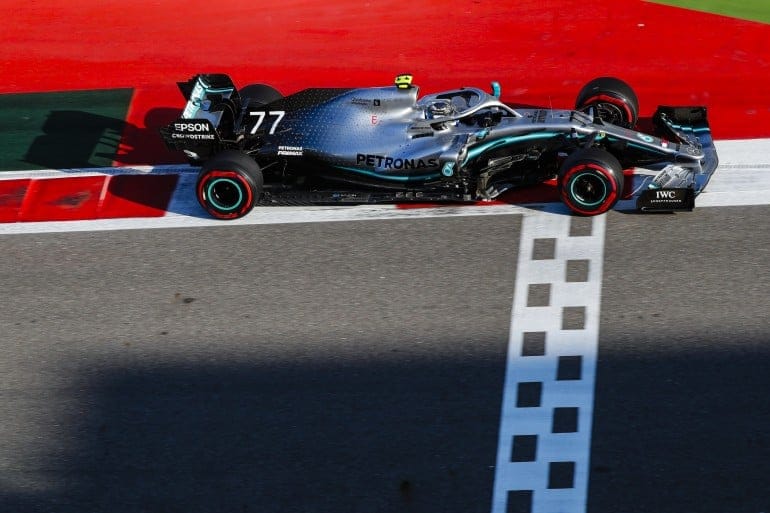 Peculiarity seemed to surround the Japanese Grand Prix this weekend.  With a typhoon taking aim at Japan, the usual schedule of events was changed, with the third free practice being canceled and qualifying being moved to just hours before the race.

Then the start confounded. And in the end, even the end brought consternation.

None of that mattered to Valtteri Bottas, who earned his third win of 2019 and the sixth in his career, all coming with Mercedes.  Just like its driver, the Mercedes team found reason to celebrate as it walked away with its sixth constructors championship in six years.

Sebastian Vettel, who had scored the pole earlier in the day, finished in second, with Lewis Hamilton nipping at his heels in third.  Alexander Albon continued his impressive run with Red Bull and took fourth, while McLaren’s Carlos Sainz nabbed fifth.

Charles Leclerc finished in sixth after an eventful race, with Daniel Ricciardo pulling through the field after a lousy qualifying to cross the line in seventh.

Pierre Gasly, Sergio Perez and Nico Hulkenberg rounded out the top 10 — though that order was not the original classification.

To call this race confounding might be a bit of an understatement.  The two Ferraris had locked out the front row for the race, and yet both managed to squander their position.  Vettel erred by drifting, then stopping in his starting position before the lights went out, killing his momentum and giving Bottas, who was perched behind him, the excellent opportunity to pip him going into turn 1.

Leclerc, meanwhile, chose to make a mess of things in a different way by driving into the side of Max Verstappen in turn 2, sending Verstappen off the track and damaging his own car so that he needed to make a pit stop.

Bottas took control of the opportunity and began pulling out to a lead, steadily increasing his margin by a tenth of a second or so each lap so that by the time he pitted he had driven to a four-second lead.  Pit strategy had Vettel coming in first, to which Mercedes quickly countered by bringing in Bottas.

Meanwhile, by the time the first pit stops had taken place, Verstappen, even after pitting, limped around the track with such poor performance that he retired.

His interview with Sky Sports indicated that he felt that Leclerc should have been given a penalty for the contact.  The stewards declined to make any judgments during the race and instead opted to wait until after the event, believing that speaking with the two drivers would bring better clarity before making any kind of ruling.

The race, for the most part, held in check from the first pit stops onward.  Both Mercedes and Ferrari opted to put their drivers on two-stop strategies and held forth with their plans.  The curious element came in how Mercedes managed Hamilton.

With 20 laps to go, Bottas trailed Hamilton by nine seconds but with fresh tires.  Though the new Pirellis should have made Bottas catching his teammate a foregone conclusion, Bottas never seemed able to really close the gap.  Yet Mercedes, with about 10 laps to go, called Hamilton in for tires even though Bottas had yet to get to a sub-seven-second interval.

The team argued it was playing it safe and that the reason to bring in Hamilton was in order to clinch the constructors title.  All the Silver Arrows had to do to wrap it up was outscore Ferrari by 14 points to secure the championship, and considering that the payouts in F1 come from the team finish and not from the drivers, there is a reason to focus on taking care of the organization more than the individual.

Yet, and to no one’s surprise, Hamilton was not only solely focused on what it would take to win but also sounded less than happy after the race on the radio between him and the team.  His third-place finish means he will have to wait to clinch his sixth championship, but his doing so is rather a foregone conclusion.

After pitting, Hamilton came out behind Vettel, and though he could pull up to the rear wing of his rival, could never steer past.  And if he had done so on lap 53, the last scheduled lap of the race, it would not have mattered.

The final quirk to the unusual weekend showed up when the digital checkered flag flew.  Per FIA rules, once a race-ending flag is shown, the results are set from that lap. Hence, when Pierre Gasly spun Sergio Perez into the wall on the last lap, and sent him out of the points, the incident became null and Perez enjoyed a points-paying finish after all.  The last time a race featured an early finish came in 2018 at the Canadian GP when the flag was waved two laps early.

The series takes a week off before heading to North America, first in Mexico then a week later in the US.