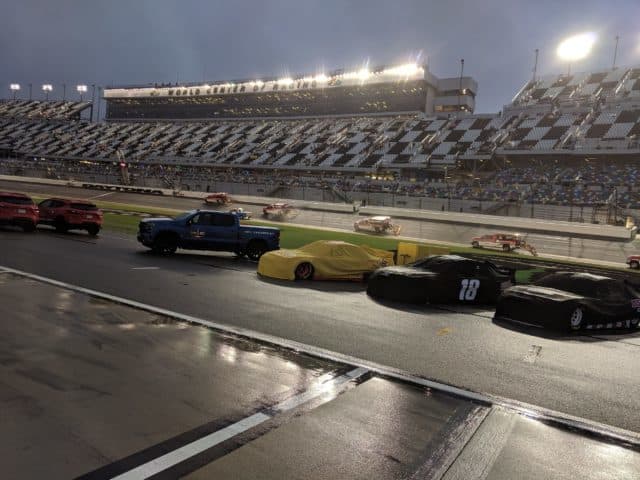 Rain halted the 1000Bulbs.com 500 at Talladega Superspeedway Sunday (Oct. 13) afternoon with just 57 of 188 laps completed. William Byron, who won stage one, was scored as the leader when the red flag flew. No major wrecks have impacted the race as of yet; 33 of the 40 competitors, including all 12 playoff drivers, remain on the lead lap.

Ryan Blaney is currently scored as the driver who’s led the most laps at 15. He spun entering pit road on lap 34 but recovered to a 10th-place finish in stage one. NASCAR Gander Outdoor Truck Series driver Matt Crafton, meanwhile, will replace Paul Menard in the Wood Brothers No. 21 for the remainder of the race. Menard was complaining of back issues entering the weekend and hopped out of the car after stage one.

The second race in the Round of 12 will resume Monday, Oct. 13 at 2 p.m. ET on NBCSN. The weather forecast looks promising with partly cloudy conditions and a slim 10% chance of precipitation. – Beth Lunkenheimer

Xfinity Series: What to Expect in the Round of 8

The NASCAR Xfinity Series had its first weekend off since mid-June this weekend, and there was a lot of action over that summer stretch.

You had eight winners during this 15-week span, including Austin Cindric getting his first checkered flag. The Big Three of Xfinity distinguished themselves, with Cole Custer leading the way; he won a quartet of races during those 15 events. Christopher Bell followed up with three and Tyler Reddick had two, pulling away from the rest of the field. Expect those three to be strong come the Round of 8, too.

In the NXS Round of 12, Bell earned seven playoff points, holding a 48-point margin over fifth place in the championship standings. He will likely win one of the three races in the round at Kansas Speedway. That’s the site of his first series win in 2017. Texas Motor Speedway or ISM Raceway are also good tracks for him historically as well.

Custer is a comfortable 36 points to the good, and he’ll probably win one of the three races, too. Frankly, it wouldn’t be a shocker to see the series’ Big Three sweep the round, as Reddick (+30 over the playoff cutline) will continue to run strong.

Further back, Cindric sits on the bubble heading to Kansas. Justin Allgaier is fifth, three points behind Cindric for the transfer spot to Homestead. Chase Briscoe sits sixth, four markers back while Michael Annett is seventh, eight behind. Noah Gragson goes into the round eighth in points, 12 markers out of fourth place.

Expect the Big Three to advance to Homestead for the second consecutive season. But that leaves the question of who gets that fourth spot. It’s going to be an all-out points race, and with Allgaier’s recent surge, he’s the slight favorite to edge the others for a title chance at Homestead-Miami Speedway. – Dustin Albino

Johnny Sauter crossed the finish line first in Saturday’s (Oct. 12) Sugarlands Shine 250 at Talladega Superspeedway, but it was Spencer Boyd who ended up celebrating in victory lane. On the white flag lap, NASCAR deemed Sauter moved below the double yellow “out of bounds” lines to protect the lead from a charging Riley Herbst. That dropped him to a 14th-place finish as the last truck on the lead lap.

To make matters worse for the No. 13 team, NASCAR initially called Sauter to victory lane before reviewing video footage and making the declaration he’d violated the rules.

“There’s a lot of moving parts in the tower,” NASCAR senior vice president of competition Scott Miller said. “So when the cars are coming to the line, our first order of business is to watch and make sure there’s not cars flipping back in the tri-oval.

“So, we first watched that. Then it was brought to our attention that we might have a situation with (Sauter) so then we looked at all of the replays from there and made our determination,” Miller continued. “That’s just how the process goes. He actually did two things wrong. He had his whole car down below the yellow line, which you can’t do and you can’t force another car below the yellow line. He did both.”

Meanwhile, five of the six remaining playoff drivers survived NASCAR’s Gander Outdoors Truck Series visit to Talladega Superspeedway Saturday afternoon. Despite most of them facing some sort of adversity throughout the race, all but one of those drivers finished inside the top 10.

The one outlier? Ross Chastain, who used an ill-timed block while leading and ended up spinning to trigger the Big One. He wound up 22nd on the day and now finds himself below the cutline, albeit by a slim two points. Brett Moffitt increased his lead over the cutline to 45, despite a black flag for locking bumpers with Stewart Friesen. The pair sits first and second in the standings ahead of the series’ second trip to Martinsville Speedway in two weeks. Austin Hill is third, just 12 markers ahead of Tyler Ankrum in fifth. Matt Crafton currently holds the fourth and final spot above the cutline by a single point.

The series takes next weekend off while the Monster Energy NASCAR Cup and Xfinity series are at Kansas Speedway. The next event for the Trucks is at Martinsville Speedway the following weekend, giving this tight title chase a chance to breathe. Just two races are now left to set the Championship 4, each vastly different tracks in Martinsville and ISM Raceway.

With the tight margins around the cutline, you can bet each of the playoff teams will do anything they can to make sure they’ve got a shot to race for the championship at Homestead-Miami Speedway next month. – Beth Lunkenheimer

Sports Cars: The End of Sorts

Saturday’s Motul Petit Le Mans marks the end of the 2019 IMSA WeatherTech SportsCar Championship season.  You saw excellent racing, griping about balance of performance and increased speeds due to the new tires from Michelin.

However, Saturday’s (Oct. 12) 10-hour race will see some programs come to an end.  CORE autosport’s DPi program ended Saturday night.  Team owner/driver Jon Bennett has retired from driving and he will no longer field the No. 54 Nissan DPi.  There is a search underway to find a new customer to run the Nissan, but nothing has been announced as of yet.

Action Express Racing announced last week that it will likely not have the funding to run two Cadillac DPi-V.R.s in 2020.  The team will continue to field the No. 31 Whelen Cadillac full-time with the returning pairing of Pipo Derani and Felipe Nasr.  Filipe Albuquerque will drive in the endurance races.  Juncos Racing is also a question mark for 2020 after an expensive year.

In GT Le Mans, Ford’s factory program for the Ford GT came to an end.  There are hopes that you’ll see the Ford GT somewhere in addition to the WEC’s GTE-Am class in 2020, but nothing is announced as of now.  GT Daytona has uncertainty, too, with a couple of teams possibly folding.

The bottom line is the paddock may look quite a bit different once Daytona comes along in January.  When that happens, Frontstretch will be there to bring you the action at the Rolex 24 at Daytona for the fifth straight year. – Phil Allaway

Charles Leclerc has been on fire.  Ever since summer break, one could argue he has been the hottest driver on the Formula One grid, accumulating five pole positions and two race wins.  All the evidence suggests he will be taking over the number one driver position at Ferrari sooner rather than later.

It appears, however, that Leclerc still has some learning to do.

The 21-year-old driver has shown all kinds of promise in his first year with Ferrari, proving to be quite the competitive teammate to Sebastian Vettel.  But on Sunday, Oct. 13 at the Japanese Grand Prix in Suzuka, he showed his youthful inexperience and is lucky it did not cost him more than it did.

After a rather calamitous start by the two Ferraris who had locked out the front row, Leclerc bounded into Max Verstappen in turn 2, sending Verstappen off track while injuring his own front wing.

The damage to the car was sufficient enough for FIA and Ferrari to discuss bringing Leclerc in for repairs. But with his time barely faltering, holding the third spot on track, Leclerc saw no reason to come into the pits.

That proved to be a calamitous mistake. The endplate of his wing eventually flew off, flying into Lewis Hamilton’s car on the second lap and taking off his right-side mirror.

So in sum total, Leclerc’s messy day had Verstappen fuming, especially after he was forced to retire. Hamilton was then left in disbelief with the race stewards highly upset. Most importantly, Leclerc left Ferrari disappointed and questioning his own decision-making.  That’s quite the day.

As a young driver, Leclerc will likely have races like this one in the future.  He need only ask Max Verstappen about these kinds of mistakes. How he manages them, however, will be what shows the mettle of a champion or if he’s just another petulant youngster with a fast car. – Ava Ladner