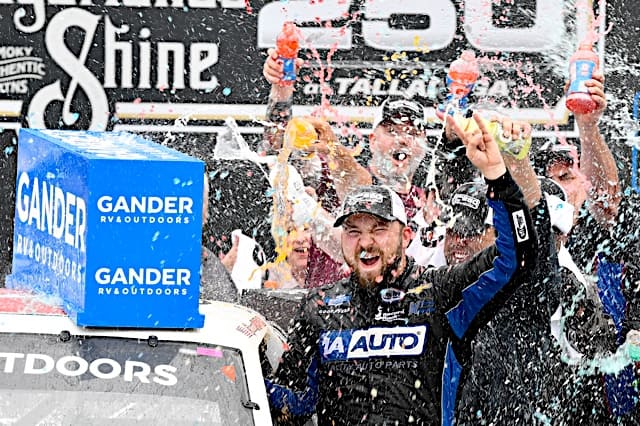 In a Nutshell: Johnny Sauter crossed the finish line first, but Spencer Boyd walked away from Talladega Superspeedway with his first career win Saturday afternoon (Oct. 12).

“Two weeks ago, I wasn’t running this race,” Boyd said in victory lane. “…Four years ago, I was selling cars with my dad at Hendrick Automotive Group. A lot of people have believed in me to get me to this point. … Man, I don’t drink beer, but it’s gonna happen tonight.”

On lap 51, NASCAR assessed a penalty allowed by specific superspeedway guidelines in the 2019 rule book to Friesen and Moffitt. The offense? Locking bumpers.

A tough penalty for Brett Moffitt and Stewart Friesen.

Do you agree with NASCAR's call for locking bumpers? pic.twitter.com/Qrs39oUYrT

Despite the penalty that caused the pair to lose the draft and fall off the lead lap during a late green-flag run, cautions inside 10 laps remaining gave both drivers the free pass and allowed them to move through the field. Moffitt and Friesen ended up fourth and fifth, respectively, on a day where the pair showed the kind of speed that could have put them 1-2 at the finish.

Moffitt, who was furious on the team’s radio at the time of the call, didn’t think any differently of the call by the time the checkered flag flew, despite recovering to a top five.

Friesen was a bit more laid back in his response, though he was just as confused about the call.

“I don’t really know what to say about anything,” Friesen said. “I didn’t see it. I have no idea, no clue. But we were fortunate to get back to the lead lap and get a fifth out of it.”

NASCAR senior vp of competition Scott Miller addressed the call after the race with Fox Sports.

“Those are tough calls, and I think there were several instances… finally they just kept doing it,” Miller explained. “There was really no other choice for us but to make that call.”

Once again, a judgment call brings NASCAR’s credibility into question at a superspeedway race. While there were times where it appeared the two locked bumpers periodically throughout the race, it wasn’t clear what finally necessitated the penalty. Obviously, the sanctioning body felt there was enough evidence for it to stand, though when a sport’s broadcast partner can’t even pinpoint what led to a penalty, it’s not a good look.

Sauter may have crossed the finish line first, and though he did celebrate with a burnout and receive the checkered flag, he ultimately walked away with a 14th-place finish at Talladega Saturday afternoon. A controversial call by NASCAR determined Sauter forced Herbst below the double yellow line on the track while defending the lead coming to the checkered flag.

“It ain’t the first win NASCAR’s taken from me,” Sauter said after emerging from his truck. “I went down to put a little block on him, but then when I did, I got hooked sideways. That’s just plate racing. I didn’t block his advance or anything like that. If I remember, Tony Stewart and Regan Smith had the same deal a few years back. What are you gonna say?

“We did what we thought was right to win the race. Whatever.”

Despite a career-best third-place finish, Herbst was “bummed” because he felt like he “could’ve ended up in victory lane, for sure.”

“I could have absolutely stayed in the throttle and wrecked the whole field,” Herbst said. “I didn’t think that was necessary though. Tony Hirschman (spotter) put me in a good spot. He gave me a huge run off of (turn) 4 and I faked Sauter to the high side and he bought it. I went to the bottom and he drove me all the way to the grass.

Officially, the penalty report lists the call as “NASCAR discretion” for “forcing another driver under [the] double yellow line.” It’s a judgment call that’s drawn criticism for the sanctioning body in the past and will likely leave people talking well into next week, even though the rule enforced is clearly written in the 2019 rule book.

Regan Smith summed up what many are likely thinking following a pair of controversial calls Saturday.

You know what…. F – the rules at @TalladegaSuperS and @DISupdates. There… I said it.

Follow the tire tracks to see how far Gus Dean’s truck was airborne after slamming the inside wall at @TalladegaSuperS #BigHit pic.twitter.com/rsZfsyj2mV

Amazing listening to her radio, 1st she sent crew to look for scuffs but only #45 changed tires (saved them) & garaged 33 said no. Then no credit card for Goodyear to charge them before fans stepped up. Took nearly 20 laps for $2200 to get mounted/delivered & off she went.

Points Update: Moffitt was the highest finishing playoff driver, allowing him to expand his lead over the cut line to 45 markers. Friesen leaves Talladega with a 22-point advantage over fifth-place Ankrum. Austin Hill sits third, followed by Crafton, who sits just one marker ahead of Ankrum. Chastain, who was the only playoff driver to score a DNF, is currently sixth, two points behind Crafton and the final Championship 4 position with two races remaining in the Round of 6.

Ben Rhodes holds a nearly 40-point lead over the remainder of those who didn’t make it to the championship battle in ninth. SCreed rounds out the top 10.

Thanks for all the tweets, I'm OK.

Thanks to my @youngsmtrsports team for building me a fast and SAFE No. 12 @LGHVACUSA – @BakerDist Chevrolet.

Up Next: The Truck Series takes a weekend off before heading to Martinsville Speedway on Saturday, Oct. 26. Coverage for the NASCAR Hall of Fame 200 begins at 1:30 p.m. ET on FOX Sports 1; the race can also be heard on your local MRN affiliate and SiriusXM NASCAR Channel 90.