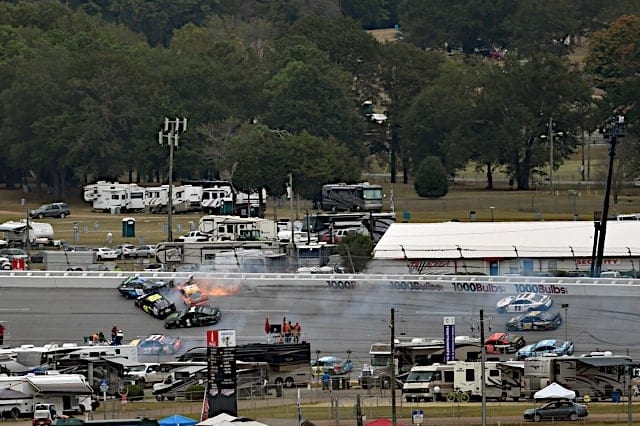 Prior to the restart of the 1000Bulbs.com 500 Monday (Oct. 14), a lot of the discussion was based around the manufacturer agreements to work together and the all-too-familiar blocking. Blocking at the very front of the field resulted in a big crash on lap 107.

Hendrick Motorsports’ Alex Bowman had just taken the lead, but got way out in front of the pack. Team Penske’s Joey Logano got a huge run on him on the backstretch. Bowman tried to block and contact was made between the two leaders. Bowman slid down to the apron and spun back up in front of the pack entering turn 3.

This is effectively a worst-case scenario for the pack. Kyle Larson piled into Bowman and the wreck was on. When the dust cleared, nearly 10 cars were involved, including four of the playoff contenders. Bowman raised his hand and took the blame for the crash.

“I just misjudged how much of a run that [Logano] had on me,” Bowman said after exiting the infield care center. “That’s on me. These cars are hard to see out of and I didn’t do a good job of it. Probably shouldn’t have attempted to block that, but that’s plate racing.”

The crash puts Bowman in a bad spot for Kansas Speedway. Bowman entered the race seventh in points, 17 points ahead of a tie for eighth between Logano and William Byron. He’s now out of the top eight.

Larson was simply a victim.

“I was in the pack and [Bowman] got turned,” he said. He came back up into the pack and I had nowhere to go. I hate that. Not very good luck there.”

Luckily for Larson, he won at Dover, so the crash doesn’t hurt him points-wise.

Martin Truex Jr., who had spent the race hanging back, also got caught up in the crash. The repairs put him multiple laps down but did not end his day. Luckily, he entered the race as the points leader in the Round of 12 with more than a full race on Logano and Byron. Chase Elliott had significant damage but managed to stay on the lead lap, crucial for his playoff hopes.

Ultimately, the crash eliminated three drivers: Bowman, Larson and Jimmie Johnson. Johnson ended up in a similar position to Larson.

In addition to those mentioned above, Kurt Busch, Ryan Preece, Denny Hamlin and Kevin Harvick were also involved. They all continued after receiving repairs.

Tell us how you really feel lol

Bowman definitely won the bone-head move of the race award. That was one of the worst blocks I’ve ever seen.
Although there were a few other serious contenders.
My prediction…. it won’t be the last time we see a poorly executed block at an RP race.