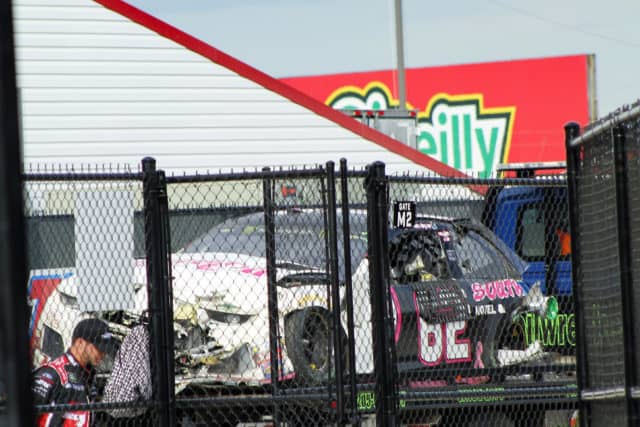 Brendan Gaughan really doesn’t get to race all that much anymore in NASCAR. His schedule in 2019 has been limited to the superspeedway races at Daytona and Talladega. That said, his goal every time that he shows up is to win the race. Gaughan came close to doing so Sunday before things went awry.

With six laps to go, Gaughan was getting a huge push down the backstretch from Brad Keselowski. There was a good sporting chance that Gaughan and his South Point Hotel & Casino/Beard Oil Chevrolet were going to end up in the lead. Then, there was contact between Kurt Busch, his younger brother Kyle and Ricky Stenhouse Jr. That contact spun Kyle into Gaughan, and Gaughan spun in front of the whole field. Then Kurt hit Gaughan, and that upset the No. 62’s equilibrium.

Take another look at how quickly the Big One unfolded at @TalladegaSuperS.

The big wreck that followed wrapped up Keselowski, both Busches, Kevin Harvick, Daniel Hemric, Chris Buescher, David Ragan, Ryan Preece and Matt DiBenedetto. Along with Gaughan, Keselowski, Kurt Busch, Ragan and DiBenedetto were eliminated in the crash. That said, Gaughan was still his normal self afterwards.

“I’ve flipped more cars than anyone racing out in the desert.” Gaughan said outside of the Infield Care Center. “Flipping [the car] doesn’t hurt; that’s what people need to understand. NASCAR does a great job so we’re in [the car] safe. When you flip, you just slow down. I’d rather do that than hit a wall any day of the week.

“It was an easy [flip],” Gaughan continued. “Thank you Brad [Keselowski] for pushing me to the lead. I was having a great time. Our Chevrolet was fast. We were up front. People think I’m crazy for loving this type of racing, but I love racing at Daytona and Talladega. I enjoy the crap out of this, and when I come with the Beard family and this ECR engine that Richard [Childress] gives me … we come here for the win.”

Unfortunately, Gaughan would not get the win. He had to settle for 27th.

Of those involved in the crash that are in the playoffs, they really weren’t hurt all that badly. Keselowski actually gained a spot in the standings, moving up to fifth and jumping over Kyle Larson. Kyle Busch managed to limp his damaged car to the finish in 19th. That allowed him to stay third in points.

Someday the industry will note that the 62 is always competitive in the Speedway races they concentrate on and that the Beard Team has exactly one crew member on its payroll. Who needs 400 employees when one can make this car compete with the best.? Darren Shaw is the most cost effective Crew Chief in the business.

Brendan Gaughan sure made that old saying come true. Be Careful What You Wish For. As soon as BG took the lead, he was flipping over in mid-air.