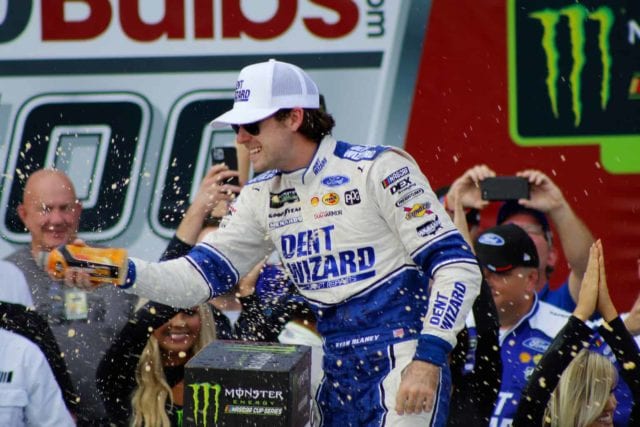 Ryan Blaney recovered from early trouble during Sunday’s portion of the race to beat Ryan Newman to the line by seven-thousandths of a second to win the 1000Bulbs.com 500 Monday (Oct. 14) in the Monster Energy NASCAR Cup Series.

The victory is Blaney’s third career Cup victory and his first of 2019.  The win comes at a great time, as it locks him into the Round of 8.

Blaney was one of the dominant drivers Sunday afternoon before he spun out on lap 34 coming onto pit road from the lead.  What could have been a good haul of points turned into a struggle to earn any.  A caution for Spencer Boyd stalling in turn 4 caught him back up to the pack and allowed him to serve a drive-through penalty for speeding by simply falling to the rear of the field.  Once the race restarted, Blaney was able to get back to 10th by the end of stage one.

Monday’s portion of the race will likely be best remembered for the Chevrolets and Fords working together, and the blocking of runs.  The former resulted in long lines of similar cars running together, especially early in the race.  The latter decimated the field.

The first big wreck occurred just before the end of stage two.  Alex Bowman had just been pushed out into the lead but failed to take into account the runs that other drivers were getting.  He tried to block a move on the backstretch from Joey Logano, and contact was made.  Bowman slid onto the apron, then spun up the track and triggered a 10-car crash on lap 107 that took himself out, along with teammate Jimmie Johnson and Kyle Larson.

Later, Chris Buescher gave Kurt Busch a big shot on the backstretch, bouncing Busch into William Byron.  Byron then spun into Logano and caused another big crash that involved more than half a dozen cars.  Byron was out for the day and took a big hit in the points at the worst possible, as he had entered the race tied for eighth with Logano.  Logano managed to continue despite significant damage and finished 11th, giving him an 18-point cushion on ninth.  Byron finished 33rd and lost significant ground.

In the closing laps, the pack was running third when chaos broke out once again entering turn 3. Busch ran in the back of his brother Kyle Busch, which turned Kyle into Ricky Stenhouse Jr.  Kyle then spun up the track and hit Brendan Gaughan, who was going for the lead with help from Brad Keselowski.  Gaughan spun and was hit by Kurt.  The hit was enough to flip Gaughan completely over one time as everyone scattered.  Five more drivers were eliminated in the crash, including Keselowski.

When the dust cleared, Blaney came out of the mess with the lead, with Aric Almirola and Michael McDowell close behind.  On the restart, Newman was able to push his way to the lead and was looking good for victory.  However, Blaney was able to sneak past for the win right at the line.

Denny Hamlin came from last on the grid to finish third, followed by Almirola and McDowell.  Austin Dillon was sixth, with Corey LaJoie seventh.  Chase Elliott finished eighth and made gains in the points.  Stenhouse dropped to ninth, while Ty Dillon was 10th.

The Monster Energy NASCAR Cup Series will be back in action Sunday afternoon with the Hollywood Casino 400 at Kansas Speedway.  Coverage starts at 1 p.m. ET Sunday on NBC.  The race is scheduled to go green around 2:40.

So Blaney won the lottery race (or whatever that was). Good for him.

Yeah, it is really hard to understand the point of these plate races anymore. I guess the team fabricators like them for job security…..

Nothing against Blaney; I like the guy, but I absolutely hate that the Crapshoot 500 race at Talladega has such an impact on the playoffs. Then again, the whole playoff format is a crapshoot.

The Hendrick Chevys worked together and were eliminated together. Karma.

Should be 3 Penske cars in the final eight and probably no Hendricks cars. The squeaker of the year is a tight race between Burton and Jr. I think one of them may have wet their pants, maybe both.

Hamlin came real close to justifying Reverend Joe’s “faith” that NA$CAR would do the right thing at the end for a Toy. He was probably in the new VL waiting. I was expecting Baby Busch to be the recipient but bad things happen to those who deserve it.