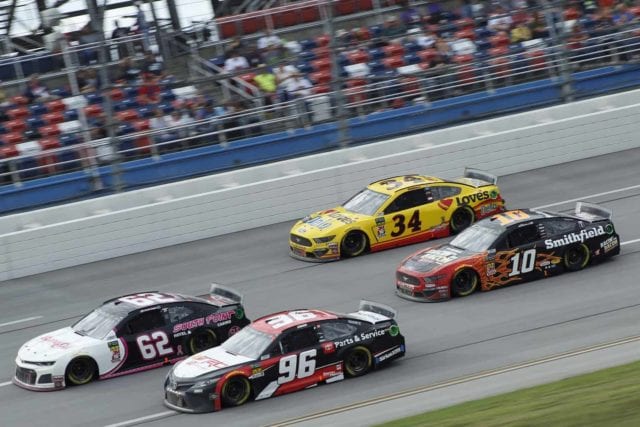 As is often the case for superspeedway races, the top of the finishing order from the 1000bulbs.com 500 was overrun with underfunded teams. It’s always interesting to see which meek teams survive the carnage to turn the tables on the mighty.

It took a while, but Michael McDowell finally earned his first underdog of the race award since the season opener at Daytona. The veteran Front Row Motorsports driver scored a fifth-place finish in Monday’s (Oct. 14) race at Talladega Superspeedway.

For McDowell, it is only his second finish better than 12th this year. He also claimed the fifth position in February’s Daytona 500. While the season hasn’t really gone how McDowell or his team had hoped, he talked after the race about what such a finish meant in terms of building momentum for the small team.

“You’re always looking for anything to build momentum,” he said. “Results always do that and that’s always part of it. Talladega and Daytona in particular are unique race tracks and a unique style of racing. I don’t know how much it helps you going into Kansas, but it’s always good to get a top five and to have a strong day and be in position to push a Ford to Victory Lane. That’s good too.”

McDowell wasn’t alone in the top 10. Corey LaJoie put his No. 32 GoFas Racing Ford in seventh place at the end of the race, also the second top 10 for him in 2019. Ty Dillon continued his strong speedway performance, his 10th-place finish being the fourth top 10 in the last six such events at the superspeedways.

Brendan Gaughan was making a run at the lead late when he got turned sideways entering turn 3 and the car went up and over before coming back down on its wheels. Gaughan was unharmed, but his chances to pull a surprise win was over.

Underdogs have a lengthy list of past successes at Talladega, and another was added to the history books on Saturday (Oct. 12) in the NASCAR Gander Outdoors Truck Series race. Spencer Boyd crossed the line in second place at the checkered flag. However, when NASCAR ruled that Johnny Sauter made an illegal block when he forced Riley Herbst below the yellow line, Sauter was relegated to the final spot on the lead lap and Boyd landed in victory lane for the first time.

“Two weeks ago, I wasn’t running this race,” Boyd said in victory lane. “… Four years ago, I was selling cars with my dad at Hendrick Automotive Group. A lot of people have believed in me to get me to this point. … Man, I don’t drink beer, but it’s gonna happen tonight.”

Interestingly enough, the only underdog to join Boyd in the top 15 was Korbin Forrester in 13th place.

With a name like Lake Speed, one ought to be destined for great things on the racetrack. But in the late ’80s, Speed found himself struggling to be successful at NASCAR’s top level. He had over 150 starts with only six top-five finishes to his credit. Speed had driven for a variety of different owners but had gone back to fielding his own cars in 1987.

1988 started off well for the Mississippi native. Daytona didn’t go all that well, but a sixth-place finish in the second race of the season at Richmond was followed up by a second at Rockingham. The Rockingham race was his best career finish, but it remarkably only held that distinction for two weeks.

When the series used to race at Darlington, both the spring and Labor Day weekend events were 500-mile races. The treacherous speedway was a grueling test of both man and machine. Speed started eighth but didn’t find his way to the front until lap 170. But once he took the lead, he held his own at the head of the pack. Speed led 178 of the final 198 laps en route to his first career win in a NASCAR national touring series race.

Unfortunately, it would be his only such win. Speed made over 400 starts in his Cup career but never got closer to winning than a third in 1994. He was unceremoniously released from his ride following a race at New Hampshire in July of 1998 and would never make another start in the top level of NASCAR.

An animated @Brendan62 on his flip (and he was just as animated over the radio after he landed) #NASCAR pic.twitter.com/jiHZhNYevC

Proud of our @Team_FRM @LovesTravelStop team. We had a shot at it again and came home with another Top-5 this year. We also helped get a @FordPerformance Mustang in Victory Lane. One day it will all come together and we will get that ?.