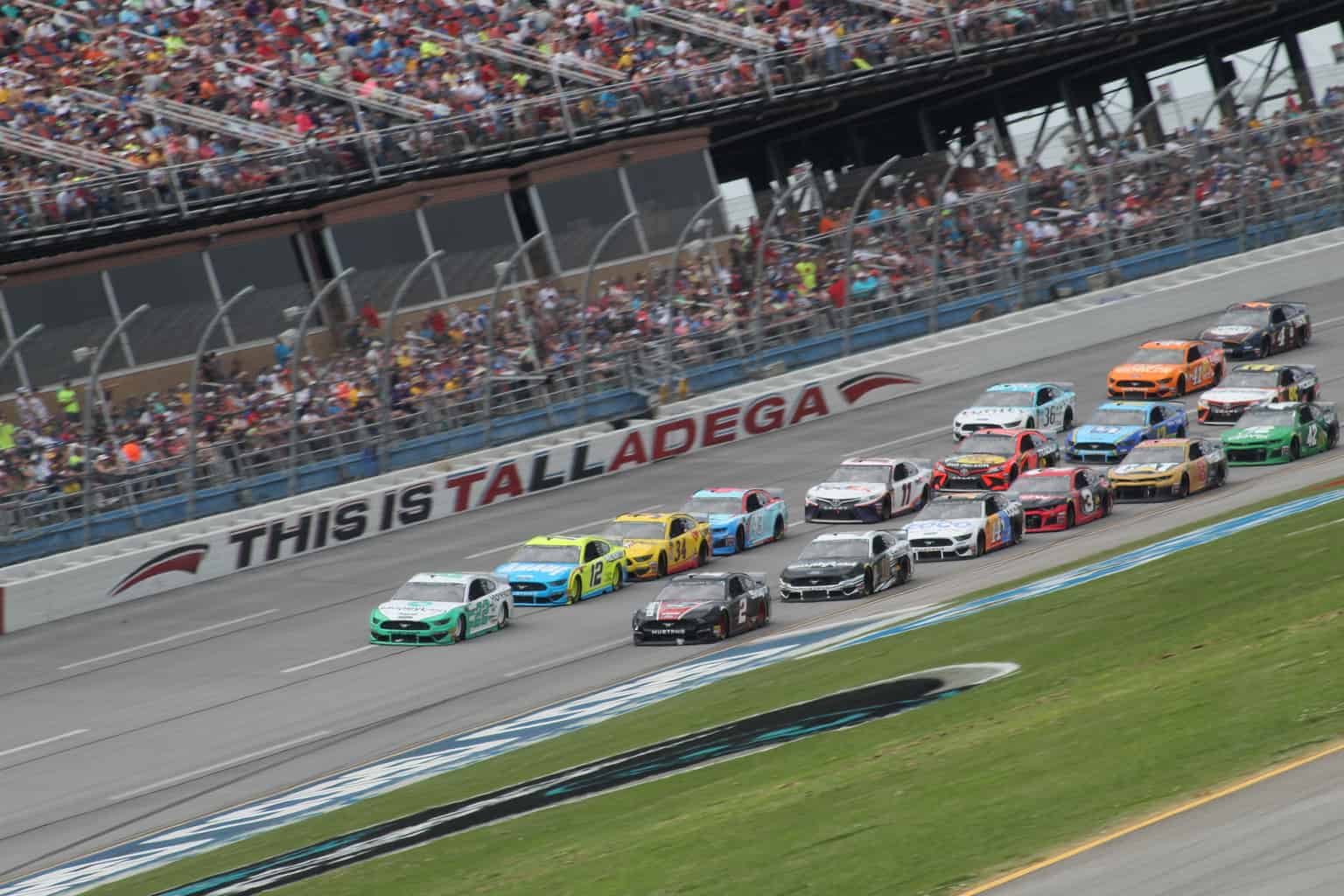 Long after a Talladega boycott threatened its existence, Talladega Superspeedway has an identity all its own.  The speedway is celebrating its 50th anniversary this weekend, and those 50 years have produced a record of thrills and spills that few other tracks can match.  There’s a lot to like about Talladega when everything goes right.  Fast-paced, three- and four-wide battles and races that end with margins of victories measured in thousandths of seconds are the stuff NASCAR fans dream about.  In many cases, that’s exactly what Talladega delivers.

But Talladega does not produce high-stakes racing without the threat of serious consequences.  When things go wrong there, they tend to go very wrong.  Advancements in driver safety have prevented any worst-case scenarios from happening at this track for several decades.  Yet every Big One, every airborne car and every catchfence-shredding crash is a reminder that racing at Talladega is not for the faint of heart.

Of course, questioning whether NASCAR pays too high a price for thrilling racing at Talladega has been going on since the beginning of the track’s existence.  Its first-ever Cup Series race, the 1969 Talladega 500, was marred by a drivers’ boycott that saw most of NASCAR’s top wheelmen sit the race out.  As the story usually goes, NASCAR chief Bill France was confronted by a group called the Professional Driver’s Association (PDA), which included most of the top racers by the autumn of 1969.  Voicing concerns about the safety of racing at Talladega, the PDA demanded France postpone the race until improvements could be made to the track.  When France refused, the PDA drivers withdrew from the event.

Not to be outdone by the drivers, France and NASCAR moved forward with the race as planned.  The starting field consisted of 36 wheelmen, many of whom were Grand National “independents” or regulars in one of NASCAR’s lower divisions.  Richard Brickhouse took the checkered flag for his first and only Cup Series victory of his career.  France hailed Brickhouse and the folks who raced with him as heroes while publicly chastising the PDA drivers.  As a result of being able to hold the race, France proved the authority of NASCAR was superior to that of the drivers.  The PDA fizzled out a few years later and the drivers have never tried to unionize since then.

But that’s the story from the perspective of France and NASCAR.  The actual history surrounding Talladega’s first race is far more complicated than the father knows best-type tale that France and his associates painted it to be.  The PDA drivers, for instance, had valid concerns about Talladega’s lack of safety, concerns which France purposefully and brazenly overlooked.  And while the track did host a 500-mile race with something resembling a full field, it is fair to say it was not the spectacular show NASCAR had promised its fans.

While the PDA was officially formed in August of 1969, discontent had been building among the drivers for some time.  The drivers wanted to have a unified voice to talk with NASCAR about safety concerns, stagnant purses and retirement funds.  Unlike the Curtis Turner-spearheaded and Teamster-backed NASCAR union from eight years earlier, introducing gambling into NASCAR was not one of the PDA’s goals, nor was there a third party provoking the drivers to act.  The PDA was more of a ground-up movement from those who had watched too many of their friends get seriously injured, or worse, through the previous decade.  They believed that the time was right to take a stand against NASCAR’s inaction on safety.

Unfortunately for the PDA, Talladega was a hill on which France was willing to die.  Designed as a Daytona International Speedway 2.0 of sorts, France had sunk years of time and money into building what figured to be the fastest speedway in the world.  NASCAR had promised its fans that Talladega would host the race to end all races, and with Dodge set to debut its new winged Daytona racer in the inaugural event, expectations were high.  The trouble was that finishing construction of the speedway became a rush job.  Initial tests proved that the track surface was very rough, and NASCAR’s competitors were not convinced their cars or tires would hold up under such conditions.

As tension mounted on race weekend, France refused to listen to the drivers’ concerns.  He made a public statement about a “foreign substance” on the track surface, cutting the tires.  The drivers didn’t buy it, nor did Firestone or Goodyear.  Firestone wound up pulling its tires completely from the race, and while Goodyear did not withdraw, its spokespeople echoed the concerns of the drivers.  It appeared evident to everyone but France that Talladega was not ready to host a race.

The final confrontation occurred on Saturday evening the day before the event when France met with the leaders of the PDA, including Richard Petty, Bobby Allison and Cale Yarborough.  It was reportedly a heated conversation, and some versions of this story involve France and Yarborough nearly coming to blows.  But however close he came to actual fisticuffs, it is certain that France told the drivers there would be a race on Sunday, with or without them.  France also suggested the drivers run at a slower pace as to avoid blowing tires.  Several of the drivers responded to this suggestion by saying that running at a lower speed would not be fair to the fans.  Such a race would not live up to the expectations of those who paid good money for their tickets.

The drivers’ predictions about the quality of racing proved to be correct.  Not unlike the infamous 2008 Brickyard 400, NASCAR wound up throwing competition cautions about every 25 laps that Sunday so drivers could pit for fresh tires.  Those who did run the race battled tire failures all day, just as the drivers and tire companies predicted.  In addition, NASCAR filled out the field with cars and drivers from its Grand Touring Series.  Not only were the Grand Touring cars out of compliance with Grand National Series rules, their drivers were instructed, in no uncertain terms, to stay out of the way.  The race may have turned out well for Brickhouse and the independents who earned strong finishes, but the competitive integrity of the inaugural Talladega 500 was clearly compromised.

Even so, the PDA lost all its leverage against France in the long run.  A master of public relations, France spun the whole controversy as a failure of the PDA drivers to uphold their obligation to the fans.  It was NASCAR, France insisted, who acted on behalf of fans and did everything it could to get the PDA drivers to race, and it was only the selfishness of the drivers that prevented the race from being the spectacular event it should have been.

Obviously, France’s version of the boycott was not the whole truth.  But in an age of limited media coverage of stock car racing, France had the power to influence the post-race news cycle more than anyone else.  In the following weeks, NASCAR was able to downplay the tire failures on race day and divert attention away from allowing Grand Touring cars in a Grand National Series race.  The decline and eventual breakup of the PDA gave further ammunition to France.  The first Talladega 500 thus became a story of France’s iron will in the face of controversy, rather than a tale of a unified drivers’ organization checking the power of NASCAR when faced with unsafe racing conditions.

Fortunately for Talladega, the track did eventually live up to its promise.  Stories about the excellence of the Earnhardt family, wild wrecks and nail-biting finishes are the moments that come to most fans’ minds when thinking about the superspeedway in Alabama.  The track’s rocky start is remembered by few.  Considering the callousness of Bill France toward legitimate safety concerns, the messy race conditions and the incredibly good fortune that no one got seriously hurt or killed, it is probably a good thing for NASCAR that the details have faded into obscurity.  The story of Talladega’s inaugural race is evidence of the old adage that history really is written by the winners.

Good written tale about Dega. I remember most of it but did not know some of things you wrote about it. Of course the real story can come from Richard, Cale, Bobby, Jim France and maybe Childress since he was a participant.