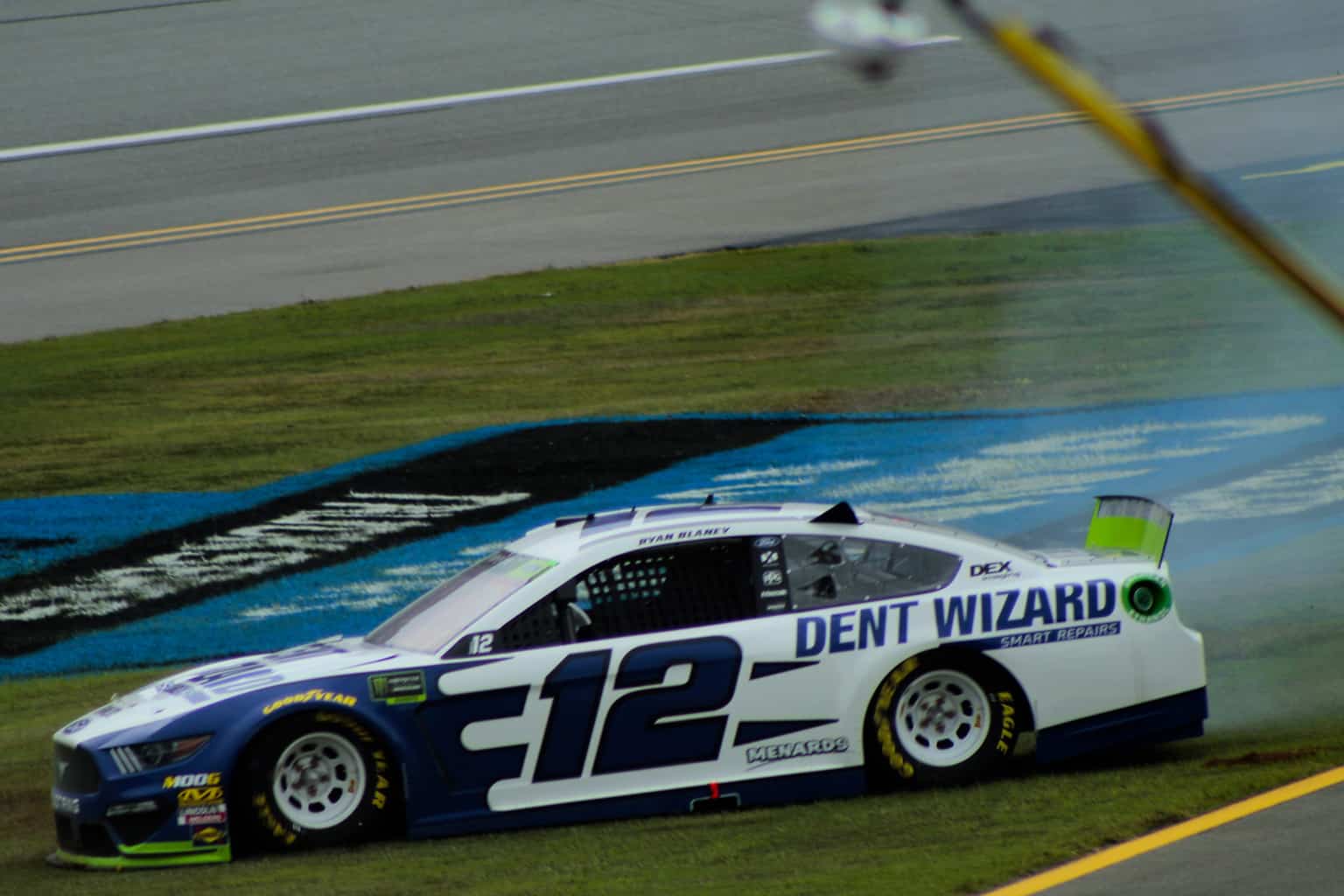 The Monster Energy NASCAR Cup Series’ 1000Bulbs.com 500 at Talladega Superspeedway, ironically for a race sponsored by a light bulb company, was mostly delayed from the original Sunday start due to a lack of lights (and a ton of rain).

So the second and third stages were run Monday afternoon (Oct. 14), and all in all it was an eventful race with more lead changes than cars entered, Ryan Blaney was busted on pit road for speeding in reverse, Paul Menard had to use a backup driver, a car flipped entirely in mid-air, and there was a photo finish to decide things at the checkered flag.

While he hasn’t been setting the world on fire this season, Blaney did win and lock himself into the Round of 8, perhaps following the title trail blazed by his Team Penske teammate Joey Logano last year, who flew under the radar and emerged victorious at season’s end.

Blaney has nine top fives, a pole and 15 top 10s this season, and has recorded five runs of seventh or better in nine tries at Kansas Speedway, which is next weekend.

While the team’s results have gotten much better recently, Hendrick Motorsports’ current lineup of Jimmie Johnson, Chase Elliott, Alex Bowman and William Byron have combined for 18 wrecks in their past 10 races at superspeedways. All four were involved in accidents during the race, and the three playoff contenders are currently on the wrong side of the cutline.

Stewart-Haas Racing’s Aric Almirola is known as a superspeedway specialist, and Talladega has been very kind recently, with seven straight top 10s after Monday’s fourth. He has 11 top 10s on the season, though this was his first since running seventh in the July Daytona race.

In 10 career Cup starts at Talladega, Matt DiBenedetto has run the full distance just four times, with four DNFs and a best finish of 19th. (At Daytona he’s finished five of nine events, with three finishes of ninth or better and a best result of seventh.)

His No. 95 Toyota was caught up in one of the Big Ones, giving him the worst finish (30th) since the Coca-Cola 600 back in late May.

Following the less-than-stellar efforts at the Charlotte ROVAL and Dover, Ryan Newman‘s runner-up finish was his fourth top 10 since Indianapolis, while his Roush Fenway No. 6 has three top fives and a dozen top 10s on the season, a colossal year-over-year improvement for an organization that has struggled for much of the past decade.

For his career at Talladega, Newman has four top 10s in the past five races, with seven top fives and 15 top 10s in 36 starts all-time.

Bubba Wallace not only finished an invisible 24th for Richard Petty Motorsports, he also took part in the secret Chevrolet team meeting before crashing into the wall about halfway through the race, collecting Spire Motorsports’ Blake Jones as well. His average finish is 23.6 in a season that’s been overshadowed by off-track antics, but on the plus side he’s run within the top 20 five times since the July race at Daytona.

Ricky Stenhouse Jr.‘s No. 17 SunnyD Ford Mustang would not win the Paint Scheme of the Week award most weeks (or ever, really; way too much going on there). But given that most of the other competitors’ schemes have won this season, and the addition of hot pink numbers, it was so bad it was almost good.

Seriously, there’s like eight different colors on that car, not counting random splotches from contingency sponsors. Also, he caused two wrecks and currently doesn’t have a ride lined up for next season, so today’s performance didn’t help make friends in the garage.

This Alex Bowman tweet applied to the lengthy rain delay on Sunday before NASCAR announced the postponement, but it also sums up the majority of the 2019 NASCAR season, in the Cup Series at least.

Roush Fenway Racing made good use of their sponsor’s product in grilling up some Oscar Mayer hot dogs for lunch.

BLANEY: You might want to check the prescription on those glasses.

Parody account NASCARcasm had some fun with Logano’s glasses, as many folks in the Twitterverse seemed to.

The Truck Series is off this weekend, but the Xfinity Series and Cup Series are both battling the windy Kansas Speedway.

The Kansas Lottery 300 will go green around 3 p.m. ET on Saturday, Oct. 19, with TV coverage on NBC. Christopher Bell should be hard to beat, especially now that he has some added momentum from his first victory as a sprint car team owner.

The Hollywood Casino 400, which confusingly takes place near Kansas City, goes green around 2:30 p.m. ET on Sunday, Oct. 20, with TV coverage on NBC. If nothing mechanical on the car goes wrong, Ryan Blaney has a strong record at the track and could make it two in a row.