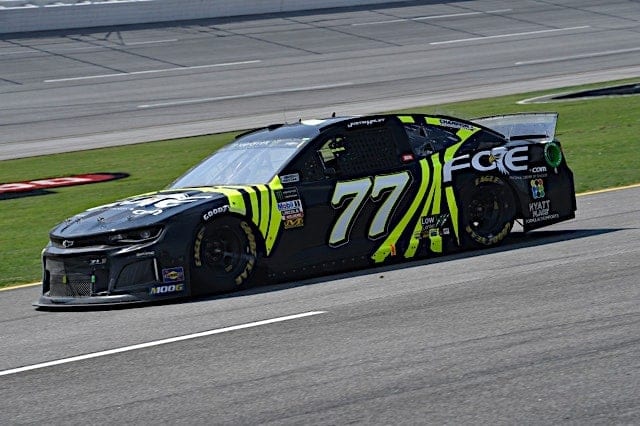 In an era of aging owners and sparse new ones, there has been one new owner in the Monster Energy NASCAR Cup Series this season — Spire Motorsports, owner of the No. 77 Chevrolet.

Dickerson and Puchyr took out a $6 million loan and purchased the charter from the now-defunct Furniture Row Racing. The team brought FRR’s president Joe Garone aboard and has raced in every event this season.

Spire debuted in the Daytona 500, making a deal with Chip Ganassi Racing to field Jamie McMurray in his swan song race. Since then, Garrett Smithley, Quin Houff, Blake Jones and Justin Haley have used the ride to get their feet wet in Cup, while veterans DJ Kennington and Reed Sorenson have filled out the schedule. Haley, an up-and-coming driver in the NASCAR Xfinity Series, is the nephew of Todd Braun, Puchyr’s former employer.

According to Dennewitz, the agency and the race team work really closely together.

“The race team and marketing team pretty much have to work hand in hand,” Dennewitz said. “You’ve got a product that you’re selling, so that product has to understand its role, and of course the sales guys have to understand the product as well. So it works pretty close.”

Despite averaging a 32.1 average finish through the first 31 races, Spire shocked the NASCAR world in July when Haley took the No. 77 to victory lane at Daytona International Speedway. During a caution past the stage two mark, Kurt Busch led the field down pit road for routine pit stops. Haley stayed out and inherited the lead, and lightning struck in the area almost immediately after. NASCAR was unable to get the race going again, so Haley and Spire were crowned the winners.

“The Daytona win was a hell of a coming-out party, maybe one that we were a little too early on,” Dennewitz said. “But it was a great opportunity for a lot of people to understand our story and understand why we got into this and how we got into it and what our plans are and what our ambitions are. So it was a little chaotic and crazy during that day and the following week, but ultimately, it gave us a good platform to kind of share our story about it.”

One of the famous traditions of a victory lane celebration is the “hat dance,” where the team poses for pictures while alternating the hats of each of their supporters. The win came so unexpectedly for Spire that the team didn’t have a bag full of the hats at the ready.

“We weren’t ready for it in some senses,” Dennewitz said about the win. “Everyone asking where our victory lane hat bag is — had we consulted a team, that would have been the first thing.

“On the long list of things we had done before the season, I did not have victory lane bag on my brain. It just wasn’t an expectation or reality. Brand new team, and we certainly don’t have the budget to throw at it, as we’re trying to crawl here before we walk and walk before we run. So it wasn’t necessarily the thought of, ‘Man, we need that victory lane hat bag together, make sure we got that all sorted out.’

“But when our good friend Jim Campbell [vice president of General Motors’ U.S. Performance Vehicles & Motorsports division] came into victory lane, he wanted to know where his Chevy hats were, and we didn’t have them, so we had to go send this guy out to get some. So there were some things like that that we definitely weren’t ready for.”

Haley is not full time in Cup this year, so the win failed to get Spire in the driver’s playoffs, and the No. 77 is below 30th in the owner’s standings, so the team didn’t make the owner’s playoffs either. The team is the third lowest chartered team in the owner standings. If a team finishes in the bottom three positions of the owner standings three years in a row, then NASCAR can take the charter. Spire is not yet a member of the Race Team Alliance, but Dennewitz said that was something the team is considering down the line.

Spire’s win proved to be rather polarizing: some praised the underdog’s victory while others claimed the team wasn’t trying to be competitive and was using the charter as a cash grab. Additionally, many more clamored about the conflict of interest of an agency that represents so many in NASCAR owning a team.

Spire Motorsports — a team that’s shown no interest in being competitive whatsoever and a team with insane conflicts of interest that wouldn’t be allowed in any other major sports series — winning a race is harmful to NASCAR.

“Even though I feel like we did a decent PR push, quietly through the garage area and the NASCAR media core, there was some fringe media that didn’t necessarily understand what we were trying to accomplish,” Dennewitz said. “They took a lot of assumptions. We were able to straighten a lot of that out in the coming week after that, which was really nice.”

"There are people who believe we are doing this as a cash grab and quite frankly, that's not true. Jeff Dickerson and I have talked about it and we believe in this sport."

The team hasn’t exactly been more competitive since the win either. In the 13 races following Daytona, the No. 77 has finished 30th or worse 12 times. But the team did run all of the laps at Indianapolis Motor Speedway, where Sorenson finished 23rd, the team’s best finish outside of the two Daytona races.

“The Daytona win, I wouldn’t say, was a life-changing experience for the race team, but it did open up conversations that maybe wouldn’t have happened in the past or maybe it reopened up conversations we had had prior to that,” Dennewitz said. “Being able to put ‘race-winning’ in front of the marketing email is nice, but it wasn’t necessarily life-changing.”

In NASCAR’s past, a shocking result by an underdog would likely lead to a sponsor coming on board for at least a few races. This was not the case for the No. 77.

“I can’t say that [the win has] made one bit of difference, one way or another, as much as we’d like it to,” Dennewitz said. “But I can say it’s nice to have and it’s a recognition point and it shows that we’re capable and that on any given Sunday, if lightning strikes, you can be part of it… literally.”

Spire plans to be back next year, and in a perfect world, it would have a full-time driver with sponsorship instead of patching the season together with a multitude of drivers and sponsors.

Regardless of if the team can find those things or not, the changes NASCAR is making in the future could benefit Spire. Next year, NASCAR is limiting wind tunnel time, which is meant to control the big teams’ spending and even the competition gap. And in 2021, the Cup Series will go to its seventh generation car, the Next-Gen Car. These cars will feature spec bodies and chassis that teams will buy from an outside vendor instead of building their own.

“We’ve been in discussions all year on what we can do for the rest of this year and obviously for next and building toward 2021 with Gen-7 and other changes that NASCAR has,” Dennewitz said. “So it’s all baby-steps, which can be frustrating because things don’t progress quite as quickly as you can. But ultimately, we’re all trying to build this program up until we can race for the win on Sundays.”

Essentially, Spire’s future depends on whether or not the Next-Gen Car really does even the playing field.

“Gen-7 is the reason we got into this,” Dennewitz said. “In many regards, that’s the whole bet, that’s the gamble that we took, that’s why we leveraged everything we have. Gen-7 is the gamble. If we wanted to be a race team five years ago, we would’ve had to spend hundreds of millions of dollars to build a manufacturing facility like you see at Hendrick [Motorsports], [Joe] Gibbs [Racing] — CFD and aero departments and engineering, there’s a lot of capital that needs to be sunk into that.

“That being said, the reason we bought into the charter system is because it allows us to have a runway ticket ready and it coincides with Gen-7. And the gamble is that NASCAR has delivered a product that we can take right off the shelf and go and compete with human capital instead of engineering.”

In addition to the 2021 car, Dennewitz said Spire’s future is banking on “cost caps and a lot of the changes we’ve heard the NASCAR leadership try to put in place in the coming years.

And Nascar wonders why there are so few new teams/owners?