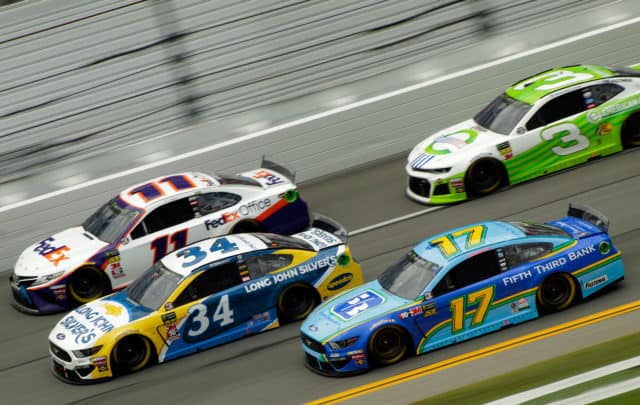 NASCAR needs to find some way to break up the big packs. No, we don’t need the field strung out like it’s a mile-and-a-half track, but smaller groups of five or six cars that can move and close on each other. That was once common fare on the superspeedways, and it produced some good finishes. You could have smaller breakaways of two or three cars that could make that work, at least briefly. If one driver popped out of line to make a move and nobody went with him, he’d drop like a stone. That’s somewhat true now, but generally, he’ll get picked up by another line somewhere.

That brand of racing didn’t eliminate the Big One, but it did often cut down significantly on the number of cars involved. Being the leader at the white flag wasn’t really the place you wanted to be, because you rarely finished there. Now that win is more likely and therefore more predictable despite the mayhem leading up to it. Break up the packs, and you won’t need a yellow-line rule, either. – Amy Henderson

2. No more out of bounds

If this is too blatant, I’m sorry.

The yellow line rule. In both races last weekend, we saw the double yellow line rule impact the ending of both races substantially. Johnny Sauter was even disqualified from a race win after forcing Riley Herbst below the line on the last lap of the Gander Outdoors Truck Series race. The double yellow line rule was initially created as a safety tool for the high-speed tracks of Daytona and Talladega. It simply states that one cannot go below that line to advance your position or force another competitor below it. Unfortunately, it looks as if that rule has run its course. With more and more infractions as of late, I believe that it’s so hard, especially in a split second in the closing laps, to judge what is fair game and what is out of bounds. There are too many questions that utterly affect outcomes of a race.

The best solution is to eliminate the rule altogether. Let the drivers race. They should have free reign over the entire asphalt. As mentioned earlier, this rule was created out of a measure of safety. However, it was created in an era where race cars were not as safe. On Monday, we saw massive pileups, atrocious hits, and a car fly through the air. Every driver emerged unharmed. I hate to think of the outcomes of these events several years ago. We are in an era of radical safety advancements. With that being said, the small extension of the apron should be fair game. Stop penalizing drivers for using it. – Zach Gillispie

When the NASCAR Xfinity, Truck Series and ARCA Menards Series race at superspeedways, they are instructed not to lock bumpers or else the drivers who lock bumpers receive a pass-through penalty. This rule is unnecessary and should be abolished.

The reasoning for this rule is two-fold. Officials do not want drivers to lock bumpers and drive away from the pack, and locking bumpers increases the likelihood of a big wreck. But these drivers are professionals. If two drivers lock bumpers and pull ahead of the field, it is the responsibility of the other drivers to catch them, not the officials’ job to penalize them. At other tracks, drivers will bump-draft each other on the restart to get a better jump.

Moreover, the desire not to cause big wrecks by locking bumpers is absurd. At the Truck Series season-opener at Daytona International Speedway, only nine drivers finished the race. In the Truck Series race at Talladega Superspeedway, Ross Chastain made a mistake and caused a large wreck, which wasn’t from locking bumpers. Plus, with the damaged vehicle policy, which NASCAR should adopt in ARCA, the number of damaged cars in the pack locking bumpers has significantly diminished. – Mark Kristl

I agree with what Mark K. said but I’ll say this. If a rule must exist that states drivers can’t lock bumpers, they must do away with punishing the lead car if there is no proof that the lead car dragged the brakes. If race officials can’t determine whether or not the lead car was a “willing participant” in the locking of bumpers, it is unfair to punish the lead car for the actions of the trailing car. What are the options for the leading car to do that doesn’t put their car/truck at risk or other competitor’s car/truck at risk? They have to go along with the flow.

In general, I don’t like the “no locking bumpers” rule. But if NASCAR wants to take that stand, I say it is unfair to the lead car to be punished unless it can be proven without a doubt that the lead car willingly participated in the act of locking bumpers. – Josh Roller

I just want to comment on this because nobody has said a word that I’ve found. When Clint Bowyer cut down a tire and got high centered on the banking the emergency teams response was farcical. Let’s try pushing it!  DOH! That’s not going to work. Let’s try using more people to push it. DOH! Use a truck to push it. Oops. We have now positioned three trucks so that none of them can go forward or backward and a fourth truck can’t reach the back of the No. 14 car. Let’s try pushing some more! I’ve got it. Hook a tow cable from a truck to the left front wheel of the car. We ought to be able to tear the entire front suspension out that way. Wait a sec. If we hook that car to a wrecker Bowyer’s Day is over. DOH. Any other ideas?

Perhaps if we push some more … Meanwhile, Bowyer is losing two laps in a car that’s barely got a scratch on it. His playoff chances were already pretty slim but that farce didn’t help any, and who knows how it will play out when they add up the points Sunday? I don’t get paid for this? It seems that when the race resumed Monday, a wrecker pushed Brad Keselowski to refire his car and he was allowed to retake his position in the field. Given the farcical “aid” rendered, Bowyer should have been allowed to retake his position too. I hope the rescue crews the tracks hire and NASCAR approves are better at fighting fires than they are at getting race cars unstuck. – Matt McLaughlin

I applaud the no locking bumpers rule. I find no joy is watching a ‘race’ where one driver must commit to finishing second to push someone else over the finish line. It’s as bad as the manufacturers wanting all their cars to run in the same pack. we saw how that worked out for the Hendrick cars, right? The huge wrecks don’t give us a race, but a demo derby where survival and blind luck determine the finish more than skill or speed.

I’ll defer to the Late, Great Dale Earnhardt Sr. on what he had to say about restrictor plate racing:

“If you’re not a race driver, stay the hell home. Don’t come here and grumble about going too fast. Get the hell out of the race car if you’ve got feathers on your legs or butt. Put a kerosene rag around your ankles so the ants won’t climb up and eat that candy ass.”

Apparently no one remembers what it was like when you could go below the line. There is a transition between flat and banking at that line in the turns which will almost always cause a car crossing it to lose control and shoot up into traffic. I remember seeing it too many times to count.

Drivers would go below the line to pass and would get back above it, and there was no problem. The problem came when they got trapped below it and could not get back onto the racing surface before reaching the turn. They could not make the turn on the flat, their car would be forced up onto the bank out of control, and a massive wreck would ensue.

The rule is in place not because of the straightaway, but to assure that no car is trapped there going into the turn. It is a good rule that needs to stay in place.

The problem as always with NA$CAR is the consistently inconsistent penalties.