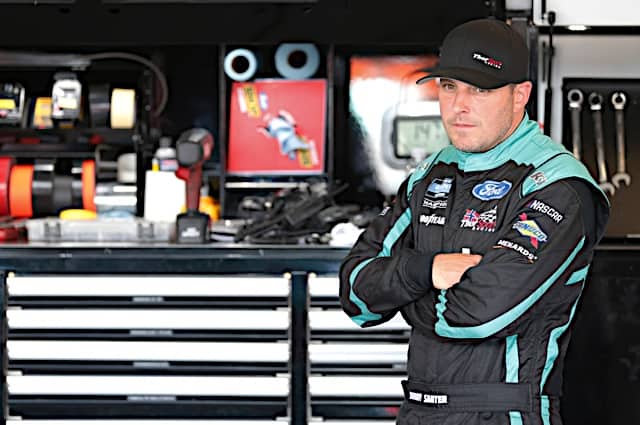 When Johnny Sauter crossed the finish line Saturday afternoon (Oct. 12) at Talladega Superspeedway, he was probably elated. Perhaps, he felt a level of vindication after his early exit from the postseason, maybe even a sense of relief. After all, he would be leaving the most treacherous, unpredictable race of the year with the trophy.

Or so he thought. As has become customary in NASCAR, a situation presented itself that called for the outcome not to be determined on the track but rather in the glass case of poor judgment high above the track. It’s fitting that race officials sit so high above the speedway, since what happens on it is often trumped by what they wanted to have happen.

Sauter got robbed. Now, I know that he isn’t really the most likable guy in the Gander Outdoors Truck Series. In fact, I’d venture to say he’s probably the least popular driver in any race that doesn’t feature a certain Monster Energy NASCAR Cup Series regular. However, he has a legitimate reason to be upset.

This isn’t the first time that Sauter got the short end of the stick, and he let it be known.

“It ain’t the first win NASCAR’s taken from me,” Sauter said after being told that he would not be going to victory lane. “I went down to put a little block on him, but then, when I did, I got hooked sideways. That’s just plate racing. I didn’t block his advance or anything like that. If I remember, Tony Stewart and Regan Smith had the same deal a few years back. What are you gonna say?

“We did what we thought was right to win the race. Whatever.”

He did essentially force Riley Herbst to go below the yellow line. That’s a violation of the NASCAR rule. It’s an unnecessary, outdated rule that has long overstayed its welcome, but that’s a whole other conversation. The point is that NASCAR has been horrendously inconsistent in making these calls. Literally 48 hours later, a very similar situation unfolded at the end of the Cup race with winner Ryan Blaney being blocked below the yellow line. That move, however, brought about no penalty. The sanctioning body tried to justify the difference. Vice President of Competition Scott Miller spoke about their position on Sirius XM NASCAR radio Tuesday morning (Oct. 15).

“First of all, one guy won the race or appeared to have won the race by making that move and the other didn’t,” Miller said. “When you’re talking about Johnny’s situation, he drove all four of his wheels under the yellow line to force (Herbst) down there. It was obviously a lot more blatant in our opinion than what transpired on [Monday, Oct. 14]. Blaney was down there, Ryan [Newman] wasn’t down there, but certainly, in our opinion, drove him down there … We reserve the right to call a car that forces another down below the yellow line. We can kind of use our judgement to assess the situation.”

Whether coincidence or not, the players involved only make the whole fiasco look even more suspect. Sauter, who isn’t exactly a fan favorite, was stripped of the win and it was awarded to Boyd, a popular underdog. NASCAR doesn’t run around fixing races, but these decisions are being made by humans with a vested interest in the success of the sport. So it’s hard to imagine that it doesn’t at least cross a few minds when the outcome is being discussed.

I agree that every situation is different, which makes eliminating judgement calls basically impossible. However, NASCAR has got to get better at making consistent rulings. Yellow flags and yellow lines have competitors and fans alike seeing red. Implement some standard metrics, and more importantly, tell fans and teams what those are. A consistent, transparent organization is a credible organization.

Racing at Talladega Superspeedway is always going to be unpredictable. How NASCAR calls the races there should not be.

Wow , Frank watch those comments about Nascar. They will pull your hard card.

I commend you for saying the truth and the obvious way things work in Nascar.
Why do you think drivers get got speeding on pit road sometimes? Because Nascar is sending a message.

They can take my credentials but they will never take my FREEDOM!