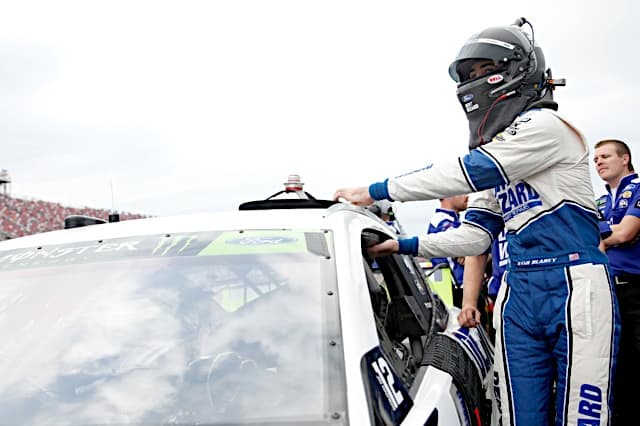 The NASCAR playoffs are heating up this weekend.

The first cut from 16 to 12 drivers sometimes eliminates a true contender, but usually it just erases the championship pretenders. But this week, after the Monster Energy NASCAR Cup Series race at Kansas Speedway, we will see some of the top teams end their title hopes. The multiple Big Ones at Talladega Superspeedway last week virtually locked in six of the top eight, but those last two positions should go down to the final laps.

Over the years, former Grand Poobah of NASCAR Brian France longed for NASCAR to be more like the NFL. He believed that NASCAR racing could be equal to the NFL in fan interest, and the whole Chase for the Championship format was born out of that desire to compete with the NFL. That dream never did and never will become a reality, and that is just fine.

Auto racing is a special sport that attracts special fans. One area in which I am very happy that NASCAR has not lived up to the NFL was shown this weekend. When Ryan Newman forced Ryan Blaney down below the yellow line at Talladega, I was worried that NASCAR might do an NFL and throw an unwanted penalty flag.

While it is illegal to go down below the yellow line and it is illegal to force someone down below the yellow line, I am glad NASCAR swallowed the whistle on this call. We got a thrilling side-by-side finish with beating and banging, bringing back the feel of old-school NASCAR racing. The photo finish win for Blaney advanced him to the Round of 8 in the playoffs. Blaney deserved this win, and Newman didn’t deserve losing second place either. Good hard racing is what makes NASCAR great. The fact that NASCAR officials didn’t over-officiate the result like the NFL is a good thing.

This year, I had the honor of preparing a podcast for “Road to Indy” driver Braden Eves, who is a talented open-wheel racecar driver whose dream is to race in the Indianapolis 500 someday. There is only one problem standing between Eves and his dream: money.

Eves is from a typical middle-class family from central Ohio and started out in karting before making the transition to Formula-style cars a few years ago. He won the prestigious Team USA Scholarship, a program run by broadcaster Jeremy Shaw which has helped launch the careers of open-wheel and sports car racers for the past 30 years. This year, Team USA graduates won every open-wheel championship in the United States, including the NTT Indycar series. Eves has used scholarship money won at each level of the “Road to Indy” to pay for his racing the following season.

Why doesn’t NASCAR have such a program? Drivers could win scholarship money by competing in Whelen NASCAR local racing series to move up to the K&N Pro Series East and West divisions. Winning at those levels could provide a rising star the chance to race in the NASCAR Gander Outdoors Truck Series for at least a partial season. Racing has become so expensive, only funded drivers are likely to be promoted to the national tours in NASCAR soon.

Back in the old days, NASCAR fans connected with the drivers because the drivers often came from meager means just like the majority of the fans. NASCAR needs a “Road to Daytona” style program to allow talented drivers a chance to make it in this sport despite being born without a silver spoon in their mouths.

For more information about the Team USA Scholarship drivers racing over in the United Kingdom this month, check out their website at http://teamusascholarship.org/.

With six laps to go last week, my picks for Talladega were looking really good. Unfortunately, the race was 188 laps long and not 182 laps.

Now it’s on to Kansas Speedway, and the elimination aspect of the NASCAR playoffs makes this race even more important for a few guys this week in a win-and-advance situation.

A few of the playoff contenders might play it safe which also needs to be factored into this week’s picks. Harvick has a 43-point edge over the next highest driver over the last five races at Kansas, which is huge. The usual difference in points between the top drivers is usually less than 10-15 points. Elliott, who needs a win to advance, and Brad Keselowski, who is on the bubble, are also strong drivers over the last five races at Kansas. Good luck with your picks.

Win: Kevin Harvick – The perfect track for one of this season’s most consistent drivers.

Place: Chase Elliott – Has been strong but has had bad luck in the playoffs.