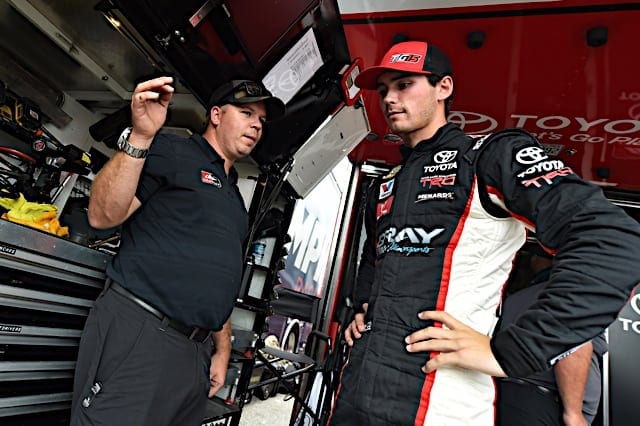 Gray will attempt to make his Truck Series debut in the NASCAR Hall of Fame 200 at Martinsville Speedway in DGR-Crosley’s No. 15 and will also enter ISM Raceway and Homestead-Miami Speedway.

“I’m excited to make the step up to the Truck Series,” Gray said in a team release. “I think it’s going to be challenging, but I’m ready to take the next step with my DGR-Crosley guys. We’ve been preparing for this all season, and I think the best way to learn is to go out and do it.”

The 20-year-old Gray is transitioning from an NHRA Pro Stock champion to stock cars. He competed full time this year in the NASCAR K&N Pro Series East, winning at South Boston Speedway and finishing third in the championship standings with one win, six top fives and nine top 10s for DGR-Crosley.

Gray is entered in the ARCA Menards Series season finale at Kansas Speedway. He has competed in seven ARCA races thus far and has one top five and four top 10s, also for DGR-Crosley

Gray’s K&N  team will be joining him in his three Truck Series races. His crew chief will be Seth Smith and his spotter will be Eddie D’Hondt.

“I’m really looking forward to Tanner’s Truck debut after the building season that he’s had,” Smith said. “He’s learned a lot from where he started at the beginning of the season to where he’s at now. We tested at Martinsville and I feel like we had a really successful test session. I’m looking forward to racing there, as well as Phoenix and Homestead to finish out the year.”

Gray’s announcement in theory puts DGR-Crosley in an interesting situation for the end of the 2019 season. Its full-time trucks, the Nos. 17 and 54, are scheduled to be driven by Tyler Ankrum and Natalie Decker, respectively, for the final three races. However, Anthony Alfredo and Dylan Lupton, both of whom precede Gray in the No. 15 this season, also originally announced their intent to race at ISM and Homestead for the team (Gray’s truck number has not been revealed for those races; Alfredo posted on Twitter that he plans to be in the No. 15). While DGR-Crosley has fielded a fourth truck, the No. 5, before, it has never fielded a fifth truck, and it’s unknown if the team will do so for those events or if either Alfredo’s or Lupton’s schedule with the team has changed.