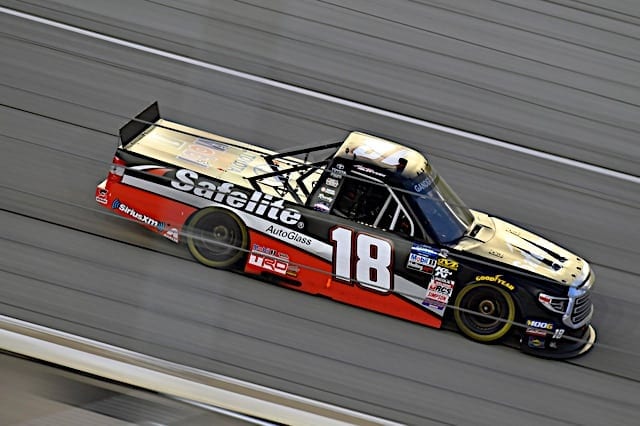 On Thursday, Oct. 17, Joe Gibbs Racing announced Harrison Burton will be moving up to the NASCAR Xfinity Series, driving the No. 20 Toyota full time. The news wasn’t as surprising, as he drove the No. 18 car for the team in six starts up to that point and earned one top five and three top 10s. While he has yet to win a national series race, Burton has 11 top fives and 17 top 10s in the Gander Outdoors Truck Series.

With Burton going to the next level, who would replace him in his No. 18 KBM truck? Below are a few drivers who could potentially find their way to the Truck Series.

One of the most popular drivers to enter the K&N Pro Series circuit, Hailie Deegan has good statistics in the last two years in the series. In 26 starts in the West Series, she has three wins, 11 top fives, 21 top 10s and has an average finishing position of 7.2. Deegan also has 14 starts in the East but so far only has three top 10s there. Lastly, she’s run five races in the ARCA Menards Series and earned one top five and three top 10s. However, Deegan and her family aren’t rushing her to get to the big leagues, allowing her to improve her skills and possibly win more races.

Christian Eckes has been a beast in ARCA, earning six wins, 22 top fives and 34 top 10s in 45 races the past four years. Three of those wins came in his first full-time season this year. In addition, Eckes has two top fives and six top 10s in 10 starts for KBM in the Truck Series. Look for him to step up to the next level.

Riley Herbst only has one victory in 46 ARCA starts, but he does have 16 top fives and 30 top 10s there. He was also the 2017 Rookie of the Year. In the K&N Pro Series West in 2016, Herbst earned seven top fives and 10 top 10s while running full time. Finally, in the past two years he’s run seven events in the Truck Series and nine in the Xfinity Series. He has one top five and seven top 10s in both series combined.

Chase Cabre is running his third full-time season in the K&N Pro Series East and is quite the talent. So far this season, he won two events, earned seven top fives, 10 top 10s and has a 5.8 average finish. The Drive for Diversity driver for Rev Racing has 14 top fives and 25 top 10s total in three years. He’s done more than enough to prove his potential and could go to the ARCA or Truck series soon.

Should Monster Energy NASCAR Cup Series teams have a break in the playoffs, or should they be shorter?

How about both? I think we can all agree the Cup season is very long. So besides reducing the amount of races in the season, NASCAR could reduce the amount of drivers and races in the playoffs. 16 drivers is too many, and if NASCAR changed both numbers, it would make the season feel shorter.

But look at the Cup Series season and compare that to the Xfinity and Truck series. The last break the Cup drivers had was near the end of August. The Xfinity Series are coming from an off-week, but that was its first time off since June. Lastly, the Truck Series is the point in the season where the teams will race every other week. This comes after about a month break between playoff races. Now, I know there are 10 less events in GOTS than in Xfinity, but between Xfinity and Cup there are just three races’ difference.

All of that is to say that the Cup Series teams need both an off-week and a smaller playoff run.

Will moving the Kansas Speedway race from Saturday night to Sunday make any difference in the competition?

Maybe, maybe not. While the Cup race at Kansas in May had a great finish, that was partly because it went to overtime. Restarts are amazing, especially at night under the lights, but there were still just 14 drivers to finish on the lead lap. The following race, the Coca-Cola 600, also ended at night and gave viewers an exciting finish. However, there were 16 cautions for 20 percent of the race, and 17 drivers completed all 400 laps. Finally, at the second Las Vegas Motor Speedway event, again 17 drivers ended the race on the lead lap. That was run during the day, but it saw a lead change with 20 laps to go.

What exactly makes for a great race? In this case, at 1.5-mile tracks, the racing is better at night. Actually, the same could be said for most racetracks. Unfortunately, not all races are run at night. But cautions and passes for the lead add to the excitement, as well as pit road strategies. Since this coming event is a cutoff race in the playoffs, it should also add to the competition, even in the daytime.

Who will advance to the next round of the Cup playoffs?

Well, both Kyle Larson and Ryan Blaney are locked into the Round of 8, so that leaves six spots up for grabs. Denny Hamlin holds a comfortable lead over the competition (56 points ahead of Alex Bowman), and unless something bad happens in the first stage, he looks fairly safe. Joe Gibbs Racing cohorts Martin Truex Jr. and Kyle Busch also look to continue on, though Busch has had some struggles recently. Finally, Stewart-Haas Racing’s Kevin Harvick has 36 points more than Bowman. He has three wins at this track and almost was sure to win again in May, had an issue not occurred. Barring any unexpected winners of drivers below the cutoff, he should again move on to the next round.

However, Team Penske teammates Brad Keselowski and Joey Logano currently hold the last two spots. In the spring Kansas race, Bowman looked very strong and nearly passed Keselowski for the lead. Bowman also has had some really good finishes before Talladega Superspeedway’s mayhem. He just might play the role of spoiler and find his way to the top if he doesn’t encounter trouble. Chase Elliott‘s also won in the playoffs this year (and a few other times) and will fight to earn his spot in the final eight. He finished fourth in the spring event. Who was behind him? None other than Clint Bowyer. In fact, if he hadn’t got stuck on the banking, he might’ve contended to win last week.

Qualify just the top 10 drivers on points for the “Playoffs”, cut the number of playoff races from 10 to 4 & cut the schedule down from 38 races (including the 2 exhibitions) to 34, or less.

Make consistency of performance matter again: Lose the “win & your in” qualifier & instead award a 50-point bonus for wins. However, do not award the bonus to the winners of races that do not run the entire scheduled distance.