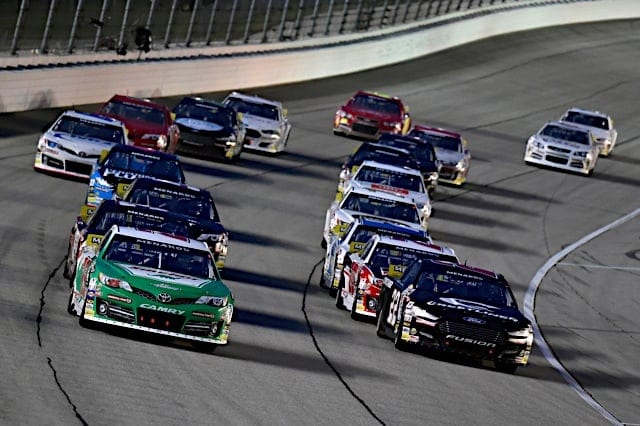 The ARCA Menards Series wraps up its season with the 2019 ARCA Kansas 150 at Kansas Speedway on Oct. 18.

It is the 19th race for the series at the 1.5-mile track in Kansas City, Kan., and it will host the season finale next year too.

Entering the final race, Christian Eckes leads Michael Self by a meager 20 points. Eckes overtook Self as the points leader thanks to his runner-up finish in the previous race at Lucas Oil Raceway.

Venturini Motorsports will celebrate winning the driver and owner championship this season, but which of the two drivers has run the best at Kansas?

The Championship is Now. pic.twitter.com/GEJeNblnpp

In three career starts at Kansas, Self has one win, three top fives and three top 10s. With an average finish of 2.3, he certainly has history on his side as he seeks the championship to end his first full-time season in ARCA.

Eckes is at a disadvantage, as he has never competed at Kansas before. However, he overcame missing the race at Salem Speedway in April to nab the points lead, and he certainly will have a fast No. 15 Toyota.

Qualifying for the ARCA Kansas 150 is of paramount importance. In all but one of the ARCA races held at the track, the winner has qualified inside the top 10.

Outside of Self and Eckes, who else could contend for the win? Defending race winner Sheldon Creed is entered in the No. 28 Chevrolet. He has only competed in one race this ARCA season, but the Gander Outdoors Truck Series rookie could deliver KBR Development its first win.

Regarding the owner championship, Venturini’s No. 20 Toyota will win it, and Harrison Burton is entered to drive it at Kansas. In five ARCA starts this season, Burton won the season opener at Daytona International Speedway and he has five top 10s. Chandler Smith drove the No. 20 Toyota to victory lane in the most recent ARCA race. Could Burton make it two in a row?

Not if Ty Majeski has anything to say about it. After a rocky 2018, Majeski has rebounded in 2019 with Chad Bryant Racing. He has driven the No. 22 Ford in five races, scoring top fives in all five races with three wins.

DGR-Crosley has entered two drivers for the race, and it too will have fast Toyotas. Drew Dollar will make his debut on a 1.5-mile track, driving the No. 4 Toyota.

His teammate will be Tanner Gray in the No. 54 Toyota. Earlier this week, DGR-Crosley announced Gray will attempt all three remaining Truck Series races this season.

Two other noteworthy Toyota drivers entered are Riley Herbst in the No. 18 and Hailie Deegan in the No. 55. Herbst was involved in controversy at the end of the Truck Series race at Talladega Superspeedway when NASCAR deemed Johnny Sauter blocked Herbst below the double yellow line. As for Deegan, she scored her first ARCA top five at Lucas Oil. Her next goal? Win at Kansas.