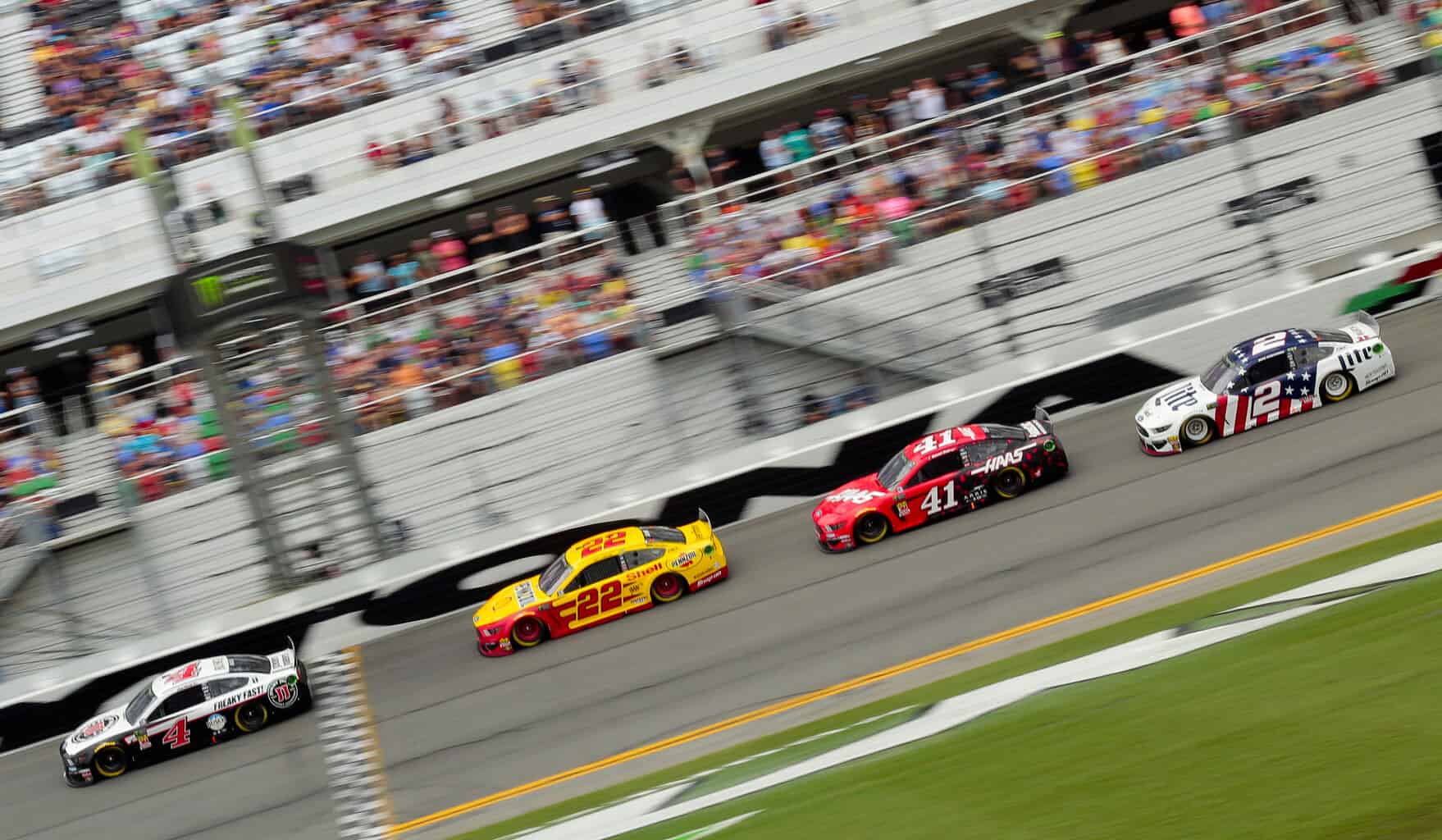 Should manufacturers be getting involved to make their teams cooperate at Daytona International Speedway and Talladega Superspeedway?

Christian Koelle: Instead of manufacturers, it should be teams working together — but understand when we get to ISM Raceway, all of this goes away; it’s every man for himself.

Josh Roller: I don’t have an issue with manufacturers getting involved. But should they? Probably not. At the same time, they spend millions of dollars a year in NASCAR. Spending that much money warrants the ability to ask for some cooperation among teams four times a year. It is important to remember that the level of collaboration that we witnessed this past weekend in the Monster Energy NASCAR Cup Series can’t be replicated outside of Daytona and Talladega.

Joy Tomlinson: Not in the way it was done this past weekend, but car manufacturers have worked in teams before to attempt to succeed at superspeedways. It worked in the Daytona 500 and the first Talladega race this year. I just don’t agree with what the Chevrolet president did; the teams should get together themselves and discuss strategy. There can be strength in numbers, but really, it isn’t fair to the Toyotas who have far less cars in the field than the Fords and Chevys.

Mark Kristl: Manufacturers spend a lot of money on teams, so they have a right to be involved; I have no problem with it. If other manufacturers are disgruntled with Chevrolet brass having a meeting with their drivers, it is up to those manufacturers teams and drivers to work hard to win. Interestingly, despite the meeting, the winning driver at Talladega Superspeedway drove a Ford.

Hendrick Motorsports took home four wrecked race cars last week, only one of which even finished. Is the championship dream over for HMS?

Tomlinson: Well, Alex Bowman did come close to winning Kansas Speedway last time around. He would pretty much need to do that in order to keep his championship hopes alive. Even if he does win, he would need to have great finishes in the Round of 8 to ensure a spot in the final four. Still, he seems like the guy with the best chance to do just that, though the odds of winning the championship is slim.

Kristl: Frankly, it never was a likely scenario. Only Chase Elliott has multiple wins, but he has not been up to par with Martin Truex Jr., Denny Hamlin and Kyle Busch over the course of the whole season. Yes, the championship dream is over for Hendrick, but i made solid gains this year; something to build on for next year.

Koelle: Its drivers caught up in other people’s mistakes or moves. Even Bowman was a victim to the I’m-not-lifting theory. At least one Hendrick car will move on, I just don’t know which.

Roller: The dream is going to be over for at least two of the three remaining Hendrick cars; I don’t see two or all three advancing on to the Round of 8. It comes down to how great its cars are, can Bowman, Elliott or William Byron win and how well Brad Keselowski and Joey Logano race.

Koelle: Yes; he forced him under the yellow line. But there are now moments in history like Regan Smith at Talladega in the Cup Series in 2008 that suddenly don’t look like correct calls.

Kristl: Yes, but is the rule necessary? Also, why did NASCAR penalize Sauter and not Herbst? Clearly Herbst drove below the double yellow line and never attempted to cross it again before the finish line. He too should have been penalized by finishing as the last driver on the lead lap behind Sauter.

Tomlinson: Yes; he tried to block Herbst and went all the way below the yellow line to do it. It was pretty clear there; I just wondered why it took them so long to penalize him.

Tanner Gray is going to attempt to make his Truck debut in the final three races of 2019. Name another driver you think should get a shot in a truck before the season is over.

Koelle: I’ve been saying Michael Self for a while. The guy is running against a Kyle Busch Motorsports driver in the ARCA Menard Series with no road to the next level. If he could get the chance, just maybe he could impress.

Kristl: Self. He may win the ARCA championship. In his career, he has won on all the various types of ARCA tracks. Sadly, he is 28, he is unsure of his plans for next season due to funding and he could join Austin Theriault and Mason Mitchell as ARCA champions who are no longer regularly competing full time.

Tomlinson: Hailie Deegan, at least one race to get a feel for the competition and ambiance. She has three wins in two years in the K&N Pro Series West, with two of them from this season. She’d gain some experience for the future as well as show her potential (though in a limited capacity).

Roller: Ty Gibbs. Being 17, he could only attempt Martinsville Speedway or ISM Raceway. If he has a 2020 campaign similar to his 2019 campaign, whoever is in Kyle Busch Motorsports equipment next year better win — and win a lot — because Gibbs will be gunning for a full-time Truck Series ride in 2021.