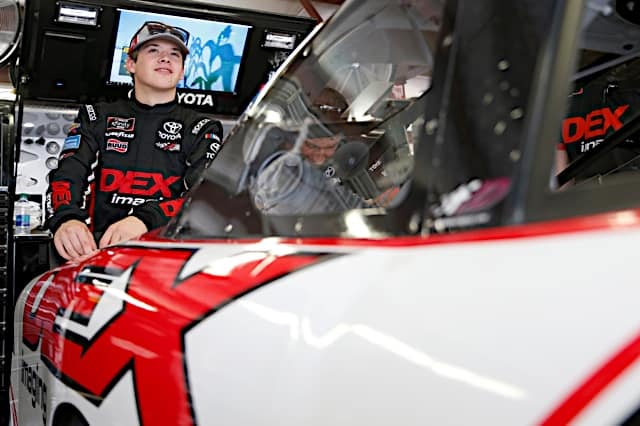 Harrison Burton is getting a promotion.

The driver of the No. 18 for Kyle Busch Motorsports in the NASCAR Gander Outdoors Truck Series will move to the Xfinity Series for Joe Gibbs Racing in 2020, the team announced Thursday, Oct. 17.

Burton will drive the No. 20 that is being vacated by Christopher Bell, who moves to the Monster Energy NASCAR Cup Series and Leavine Family Racing’s No. 95 for 2020.

“Next year is going to be a really cool opportunity for me because I grew up watching my dad race in the Xfinity Series,” Burton said in a team release. “Making my first start at Bristol this year was really surreal. I remember being a little kid and watching (Jeff Burton) race there and now, I will have the opportunity to compete for the Xfinity Series championship next year.

“On top of that I’ve got Dex Imaging continuing their support of me for a majority of races next season. That’s really cool because I’ve had them as a sponsor since I was 13, and to bring them from pro-late models all the way to the Xfinity Series is pretty wild.

“I want to finish this season strong, but I’m excited to get 2020 started. My time with JGR this season will really help me because I’ve already gotten to know so many people there and it’s such a great team and organization. They have a long history of helping to develop drivers and this is big for the next step in my career.”

Burton, son of former NASCAR driver and current broadcaster Jeff Burton, has competed in six Xfinity races in 2019, scoring a top five and three top 10s. He also has seven top fives and 10 top 10s in the Truck Series in 2019 for a total of 11 top fives and 17 top 10s since his series debut in 2016.

Burton joins Brandon Jones at JGR in the Xfinity Series in 2020. The lineup for the team’s No. 18  has not yet been announced.

A replacement for Burton at KBM has not been announced.

A little hard to grasp based on his lack of success with KBM. Same old story its who you know and how much $$

This won’t end well. His excitable father Screech must be soooo happy. Gawd…….

This just makes the telecasts even more unbearable than they already are. How is he going to be able to be unbiased???

Flop. Money and publicity. He will get camera time and so will his Mother. Now I know I am not renewing any of my Xfinity tickets.