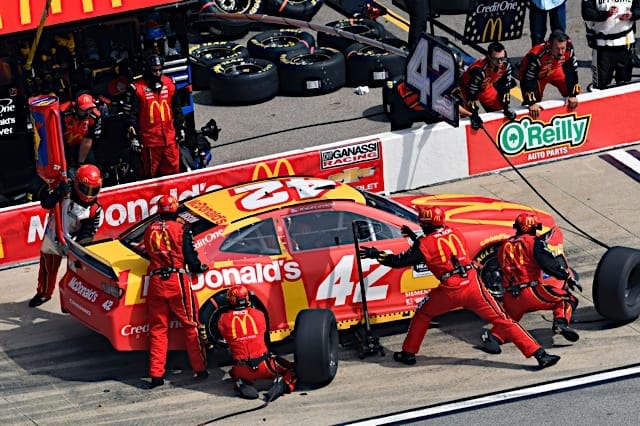 NASCAR continues to try to parallel stick-and-ball sports with its playoffs and crew member numbers. Unfortunately, it has also started to mimic its more traditional sport partners with its ridiculous number of rules and poor enforcement of said rules.

The NFL has been getting bashed over the first six weeks of the season for its inconsistent and downright shoddy officiating. Sadly, NASCAR has not been far behind this year, and last weekend at Talladega Superspeedway it was even more inconsistent than it had been earlier this year.

The continued increase in rules and associated rules enforcement has been going on for years but has greatly escalated since the advent of the Car of Tomorrow. The rulebook for NASCAR expanded by many pages when that version of the race vehicle hit the track, and the continued addition of rules has not slowed down since then. In an effort to make the enforcement of rules more uniform, NASCAR went to a video system, which can now scan every pit stall and have computers analyze most stops for the vast majority of violations.

While that has eliminated much of the arbitrariness of rules enforcement, it as not eliminated all of it.

You still have calls of crew members’ hands touching down in pit boxes, tires that are or are not an arm’s length away from a crew member or drivers making lane changes before reaching the start/finish line on restarts. Similar to the NFL, all of these calls seem to be enforced at the whim of the almighty being in race control who sees violations when they want to and ignores them when they don’t.

All of this stems from one simple fact: there are too many rules. The complaints with the NFL have risen steadily over the last few years just as the complaints in NASCAR have risen.

The bottom line is this: too many rules to enforce, and you can’t consistently enforce them all.

The arbitrary nature of enforcement was once again on display at Talladega. During the Gander Outdoors Truck Series race as the final sprint to the finish unfolded, Johnny Sauter led Riley Herbst toward the finish line. Whether you believe Sauter moved down to force Herbst below the yellow line or Herbst contacted Sauter to get him out of shape which forced him to move down, the end result was a penalty for Sauter, which gave the win to Spencer Boyd.

Fast forward to Sunday and Ryan Newman had the same events unfold during the Monster Energy NASCAR Cup Series event. On the frontstretch, headed to the checkered flag, his options were either to move down to force Ryan Blaney below the yellow line or have Blaney contact his left rear, which would get Newman out of shape, and ultimately that caused him to force Blaney below the yellow line.

Either way, the left side tires of Blaney’s car were below the yellow line in the tri-oval of the track. Somebody should have been penalized for the last-lap actions. Whether it was Newman or Blaney, based on the previous day’s result, based on the Xfinity Series result at Daytona International Speedway in 2018 when Justin Haley had two tires below the yellow line or when Regan Smith was jobbed out of a win at Talladega in 2008 when Tony Stewart forced him below the line but Smith was penalized.

The greatest frustration of this entire fiasco that is race officiating in NASCAR is that there is zero accountability for the individuals making the calls. In the NFL, the NBA, Major League Baseball and the NHL, officials are graded. They are compared to other officials and standards, and the ones who do the best get to do more and bigger games.

In the NASCAR world, you can absolutely suck at your job as a race director/official, and there is nothing that happens. Caution flags have been hit or miss. There is no standard for what is or isn’t a caution flag. Races have been won or lost because of uncontrolled tire calls on pit road where a tire is sitting still and within 4 ft. of a crew member while other tires have rolled into an adjacent pit box and not been called.

In the end, two things need to happen.

First, the NASCAR rulebook needs to shrink. There is too much oversight in too many areas that result in too many calls having to be made that have nothing to do with the real reason we’re at the racetrack, which is to race cars and determine a winner.

Second, there needs to be accountability after races for calls that are made. Either the race director needs to come to the media center post-race and answer the assembled media’s questions about why calls are or are not made, or there needs to be a review process and crappy directors need to be put out of their job in favor of people who can do it well.

Will either of them happen? Probably not, but we can always hope.

@Mike Neff Each little rule change and selective enforcement just continues to suck the energy out of the sport. Xfinity/Trucks too low, disqualify them. Cup? No DQ rule. Laser templates, creating old-style timeouts (in a corner) for offenders. Tire not secured? Cmon man, it’s 24 inches from a crew member. Speeding? Let’s take the win away from JPM. A lightning rule now that’s only selectively enforced! Just take me back to the simple days of Joe Frasson, Tommy Gale, Tiny Lund and JD McDuffie.

The ‘too many rules’ apply to what the teams can do on their cars too. Taking the ingenuity out of the racing make is just another IROC race. Dictating every piece of engineering and part on the cars just means hiring more computer men and using more expensive hi tech equipment instead of creative thinking. That also sucks the life out of the product.

Agree. All the rules dictating the specifics of the car itself are even worse than the rules governing competition.

NA$CAR is controlling the set up of the “race” cars and telling the drivers “Go try to race with them!” They might as well be in Go-Karts.

And if they did what you guys want you’d have 3 or 4 teams racing because no one else could afford it and the series will die. Cost containment is the name of the game and it’s a problem in every form of motorsport. Why don’t you guys start a team up and get a sense of how much money it costs even to just race a street stock on Saturday night at the local dirt track?

And in one corner you have people wanting the cars to be more like what you see on the street, and in another corner people wanting freedom for the teams to do what they want. And sometimes its the same people in both corners.

Officiating consistency. I am a 40-plus year sports official. Rest assured, the officials, regardless of the sport, are competent and know what they are doing.
The problem with professional sports as opposed to amateur sports: professional sports are entertainment first. This results in the leaders in the sport, be it basketball (Michael Jordan travels, Shaq and offensive fouls); football (holding called around Tom Brady or Peyton Manning); Baseball (strike zones); NASCAR (protecting its most popular driver and creating a path to the championship 4). The officials are working within the guidelines sent from the appropriate league. The officials are honest, work hard, and know what they are doing (second time I said that.) They are under tremendous pressure to adhere to the league leaders.
The hesitation: Being overridden by replay or having a car disqualified to tighten a points race. Making it tougher to get through inspection.
Don’t blame the officials. Let them do their jobs and keep the commissioners, TV partners, I could go on, out of it.

With regards to the NFL, I find it unbelievable how many times they watch the replay and still get it wrong. Part of the problem is that we at home have the benefit of hi-def large screen TVs and super slow motion. The refs should be looking at the same but it’s hard to balance getting calls right and keeping the flow of the game moving. I think the future will be calls being made/over-ridden by someone remotely reviewing plays in real time with the benefit of hi-def and slow motion. Nothing pisses a fan off more than seeing something that gets missed by the refs. Most of us can live with ball/strike judgment calls but when it’s obvious (like a foot out of bounds or pass interference) you just want to put your foot through the TV.

Having rules isn’t the problem. Having incompetent people interpreting the rules is the problem. There are arguments playing tiddly winks.

The way the “yellow line” rule is written actually gives NASCAR discretion. I actually think they used it wisely last weekend. Sauter clearly forced Herbst below the line when Herbst was legally along side him. Newman and Blaney were beating and banging coming to the checkered side-by-side and any crossing or forcing below the line was incidental. The ambiguity here though is reason enough to relax that rule on the final straight coming to the checkered. Let them use the whole pavement from the exit of 4 to the start/finish to end the final lap.

Get rid of the outdated yellow line, it is no longer needed!

Wrong. They’ll then use the grass as the new yellow line, and if you like crashes you’ll be overjoyed at the resultant mayhem. The whole point in having the yellow line there is to avoid cars getting anywhere near the non-racing surface.