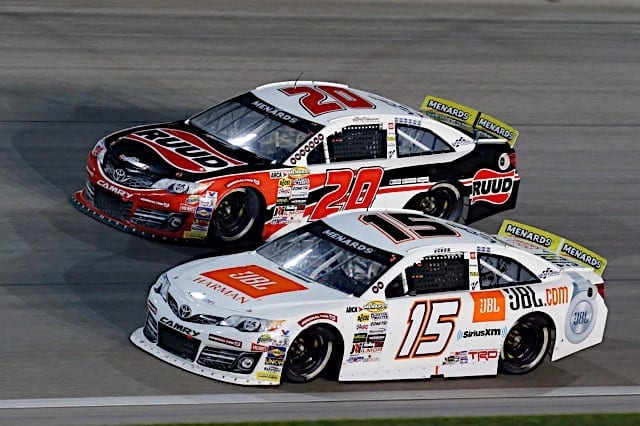 In a Nutshell: The battle between Venturini Motorsports teammates Michael Self and Christian Eckes was the entirety of the story Friday night at Kansas Speedway, and at the end of a largely uneventful 100 laps it was Eckes that left with the trophy, leading the final 43 laps to his fourth win of the 2019 season… and the series crown:

Self, who led the first 57 laps of the race after qualifying on the front row, lost the lead to Eckes on a lap 58 restart. Though Self cut nearly a second off Eckes’ lead in the final 10 laps, using the high line was not enough to overcome the advantage that clean air provided to the leader out front. For Venturini Motorsports, Eckes’ triumph marked their first ARCA drivers’ title since 1991, and came after their driver was forced to start from the rear after a post-qualifying engine change.

Outside the 1-2 finish, full-time series regulars Bret Holmes and Travis Braden both enjoyed strong top five runs that were among the best of the season for their single-car teams. Holmes’ fourth-place finish allowed the No. 23 to finish third in the series standings.

Defending ARCA champion (and Kansas race winner) Sheldon Creed finished two laps down in 11th after cutting down a tire in the closing laps; despite the late issue, Creed was never a factor for the lead.

For Eckes, the entire 2019 campaign was a comeback story, far beyond starting from the rear in Friday night’s race. Falling behind teammate Self, who won the spring race at Salem as Eckes was in a hospital bed with a torn esophagus, the driver of the No. 15 capitalized on a summer of inconsistencies and a 50-point penalty for the No. 25 team at Michigan and used a red-hot close to the ARCA racing season:

3⃣ wins and 4⃣ runner-up finishes in the last 7⃣ races of the season.

Seven consecutive top-two finishes are a title-worthy close to the season, even without the crutch of a playoff points reset. Anything less than a Truck Series ride for Eckes next season would be a disappointment.

Having said that, Self deserves a big shout-out as the 2019 ARCA tour’s runner-up for a number of reasons. His Sinclair Oil sponsorship was a distinctive presence in the pits all throughout the tour, with the iconic Dino on prominent display. Self demonstrated marked improvement as a driver, winning the first two short track races of the season despite downplaying his abilities on the bullrings. And with the title on the line in Kansas City on Friday, Self’s crew was an active participant in aiding teammate Eckes’ to change engines after qualifying when the No. 15 broke a rocker arm. The fact that Friday night’s title chase was decided mano y mano on the race track was in large part due to their sportsmanship off it during pre-race. The No. 25, long the Venturini flagship, certainly lived up to that role this season.

Between finishing third in Friday’s race, winning three ARCA races in 2019, and showing an improved prowess on short tracks behind the wheel of a super late model, boy would be a treat to see Ty Majeski get a full-time shot with Chad Bryant Racing next season. Majeski outran full-time teammate Joe Graf, Jr. in every race he ran with the No. 22 team this season. The only criticism to be leveled this Friday was with the paint scheme… good cause or not, the pink Crestliner special looked nowhere near as good as the stars-and-stripes version.

Despite racing on an aero-sensitive intermediate oval against a stout field that including three Truck Series regulars and two DGR-Crosley Racing entries, series regulars Braden and Holmes were fixtures in the top five for the entirety of Friday’s race. That resulted in a rare on-air interview for Holmes post-race and marked the first top five on an intermediate for Braden since the June Pocono race a year ago.

Though any chance drag-race convert Tanner Gray had of being a factor in Friday’s race went out the window after a disastrous pit stop under a lap 40 caution (Gray overshot his pit box and angled too deep for the jackman), scoring his first career pole and finishing sixth was a welcome result after failing to finish his two previous ARCA starts.

While Eckes drove off into the sunset in Kansas City, making a very strong case for a full-time ride in a Kyle Busch Motorsports truck next season, the three Truck Series regulars that contested Friday’s ARCA race did very little to justify their standing in a major NASCAR touring series. Gus Dean finished off the lead lap in 10th, utterly invisible in the running order. 2018 ARCA champion Creed failed to do anything spectacular with the No. 28 car, running at the back of the top 10 all night with a loose car before losing laps late with a flat tire. And then there’s Harrison Burton, who followed up his promotion to the Xfinity Series with Joe Gibbs Racing by slapping the wall of his own volition on lap 2, missing the entrance to pit road the next lap when trying to pit for repairs, and finishing three laps off the pace despite driving the Venturini No. 20 car that captured the ARCA owner’s championship. Beyond the Cup Series, the hierarchy of NASCAR’s racing tours continues to blur.

Riley Herbst fell off the lead lap around lap 20 when he was forced to pit with a flat rear tire. By using two lucky dog passes, Herbst got back into the top 10, only to suffer two more rear flat tires in the closing 20 laps that resulted in a 16th place finish, five laps off the pace. The result was Herbst’s worst in an ARCA car since a late-race wreck at Charlotte in May.

Though fortunately avoiding any contact, Tim Richmond endured another on-track incident behind the wheel of Wayne Peterson Racing’s No. 06, bringing out the caution on lap 53 when he spun out in turn 2.

Let’s start with the good where credit’s due, though I do thing social media had a point here:

Even streaming on Nascar dot com we have commercial breaks even though there aren’t any commercials. #arca

NASCAR.com stepping up and live-streaming Friday night’s race when the weather-delayed ALCS screwed up Fox Sports 1’s TV schedule was absolutely the right thing to do, allowing fans a means to watch the closest title fight in any of NASCAR’s upper level racing tours live. Thank you, thank you, thank you.

The gratitude was more than necessary, as those of us expecting to view the finale on MAVTV as advertised spent the pace laps watching frozen images of commercials run on repeat. By the time MAVTV started showing racing, it wasn’t at Kansas City… it was a rewind to ARCA’s summer visit to the Elko Speedway:

And now @MAVTV is showing a replay of the race at Elko. #ARCA

Regardless of what caused it, technical difficulties, scheduling conflicts or, as at least one Twitter user speculated, a conflict between MAVTV and Fox Sports, the fact that ARCA’s championship race was announced to be on its majority broadcast partner network and was NOT broadcast is a poor image and damage what should have been a home run decision to get the ARCA championship race live and in front of race fans. MAVTV has done some really good stuff bringing ARCA’s short track races to the airwaves but entering the NASCAR era of this tour, the reliability of the fanschoice.tv web stream is looking far more attractive than spending 2020 looking for means to maintain access to the MAVTV network.