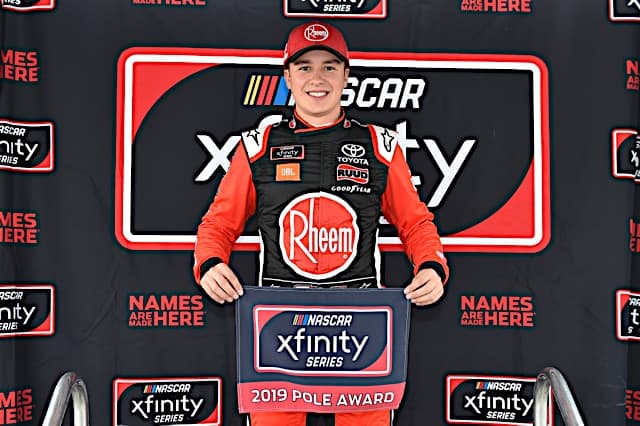 At the site of his first NASCAR Xfinity Series win, Christopher Bell won the pole for the 2019 Kansas Lottery 300. He will lead the field to the green flag later today (Saturday, Oct. 19) at Kansas Speedway.

Driving the No. 20 Joe Gibbs Racing Toyota, Bell won the pole with the fastest time of 181.165 mph. A win at Kansas Speedway would lock Bell into the Championship 4 at Homestead-Miami Speedway.

Starting second will be Bell’s teammate Brandon Jones. Jones, who was eliminated from the playoffs in the last race, posted a speed of 180.481 mph.

Here is your starting top 10 for the Kansas Lottery 300.

Of the remaining playoff drivers, Chase Briscoe will start 11th. Michael Annett was unable to make a qualifying run and will therefore start 38th, last in the field.

After a medical issue on the plane ride, Gray Gaulding had to be cleared by NASCAR to compete, and will start 19th.

A total of 39 drivers were entered, so one driver failed to qualify. Driving the No. 13 MBM Motorsports Toyota, Timmy Hill failed to make the race.

The Kansas Lottery 300 will take place today at 3 p.m. ET with TV coverage provided by NBC.