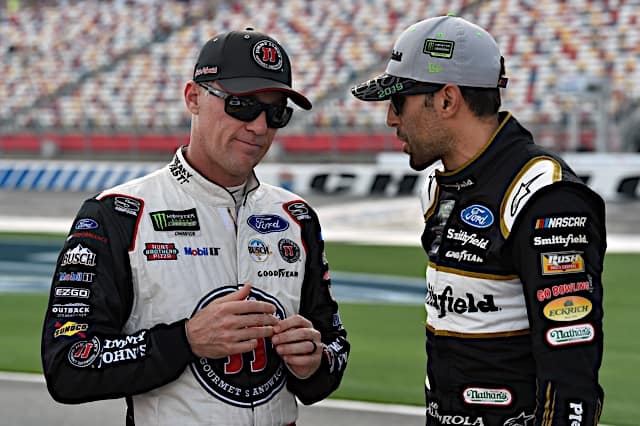 The pressure is on this weekend at Kansas Speedway, as four drivers will be eliminated from the Monster Energy NASCAR Cup Series playoffs. The Hollywood Casino 400 will air on NBC on Sunday, Oct. 20, at 2:30 p.m ET.

Kansas is a traditional cookie-cutter, mile-and-a-half oval, and with this year’s low horsepower package in effect, it has the makings of tight racing and insane restarts. These races have tended to vary between getting spread out versus tight racing the whole time, but track position isn’t as key this week and drivers should be able to work their way to the front.

Joe Gibbs Racing has dominated the 2019 season so far, winning 15 of the 31 races, however, the playing field is a little more even on the intermediate tracks, as JGR has only won three of the eight 1.5-mile races. Team Penske has matched that number, and Chevrolets won the other two. So don’t bank on JGR getting you as many points as has been the case at short tracks.

Harvick might be the greatest driver ever at Kansas. The track was added to the Cup schedule his rookie year, and he has been solid there since the beginning. He has the best average finish of drivers with six or more starts and he’s tied for the most wins and has the most laps led.

He’s the most expensive driver this week, but that’s for good reason. Harvick belongs in your lineup.

I’m sure Kansas holds a special place in Keselowski’s heart, as it’s the site of his first win with Team Penske back in 2011. The track is also home to the 2012 Cup champion’s most recent win, coming in the spring race this year.

The No. 2 has been one of the cars to beat on mile-and-a-half tracks this season — Keselowski has won two races on them and finished in the top five in five out of eight. In the majority of those, Keselowski came from the bottom of the top 20 to nab those finishes. Expect Keselowski to have another good day as he tries to go back to back at Kansas.

Blaney made his Cup Series debut at Kansas in 2014 and has been fast there each time since. He’s scored a top-five in one-third of his starts and a top 10 in more than half. Prior to finishing 32nd after a flat tire there this spring, Blaney led laps in the previous four Kansas races. On two of those occasions, he led more than 50 laps.

While he hasn’t won at any mile-and-a-half tracks like his two Team Penske teammates have this year, Blaney finished fifth at the most recent one at Las Vegas Motor Speedway. He enters this weekend with the most momentum, fresh off a win at Talladega Superspeedway, and is in for another good day at Kansas.

Almirola has a love/hate relationship with Kansas Speedway. It’s one of his best tracks, yet it was also the site of the terrible crash that sidelined him for seven races due to a back injury in 2017. Since that wreck, Almirola hasn’t finished worse than 12th at Kansas and has three top 10s in those four races since.

One-tenth of Almirola’s 60 career top 10s happened at Kansas. He had the fastest car and led 69 laps in 2012, but a flat tire killed his bid for a good finish. In the spring race this year, Almirola qualified 33rd and improved his position 21 spots to finish 12th.

Almirola is due to win at Kansas at some point in his career. It might not be this weekend, but he’ll probably still score a lot of points for your lineup. You can’t do any better for his price.

Since joining JTG Daugherty Racing in 2017, Buescher has finished 18th or better in four out of five Kansas races. The lone exception was due to a crash in spring 2018. In this past spring’s race, Buescher finished 10th and led 10 laps.

Two of Buescher’s 12 career top 10s were at Kansas. Buescher has scored top 10s in half of the mile-and-a-half track races this season and has finished inside the top 20 in all of them. One more top 10 this year and Buescher has a new career-high for a season. That could very likely happen this weekend, and you will not find another driver you can say that about for a cheaper price than Buescher.