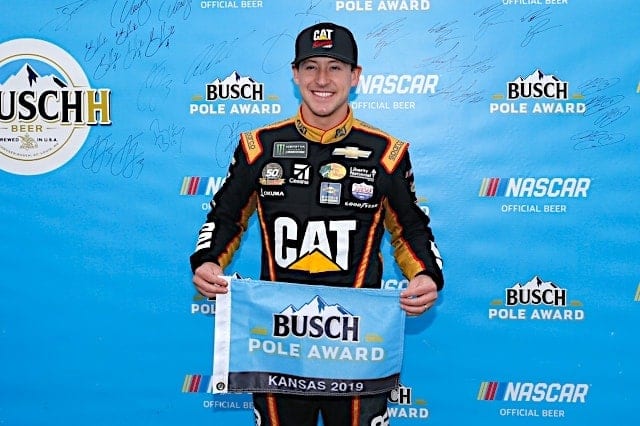 Daniel Hemric won his first career Monster Energy NASCAR Cup Series pole at Kansas Speedway. The rookie driver of the No. 8 Richard Childress Racing Chevrolet will lead the field to the green flag in the 2019 Hollywood Casino 400.

NBC Sports broadcaster Jeff Burton told Hemric he had pole-winning speed, and Hemric proved him right. Hemric won the pole with a speed of 178.047 mph.

For the playoff drivers, qualifying results were a mixed bag. The two drivers already locked into the Round of 8, Ryan Blaney and Kyle Larson, qualified third and fifth, respectively.

The only other playoff driver to qualify inside the top 10 was Brad Keselowski. He will start fourth.

The rest of the playoff drivers will have to gain spots in the race, especially for those below the Round of 12 cut line. Martin Truex Jr. will start 11th, Chase Elliott will start 14th, Alex Bowman will start 16th, Kyle Busch will start 18th, Clint Bowyer will start 21st, Denny Hamlin will start 23rd, William Byron will start 25th and Joey Logano will start 29th.

Kevin Harvick will start dead last, 40th, due to failing inspection after his Stewart-Haas Racing team noticed a problem on his No. 4 Ford.

Per Rodney Childers, the car did pass on the 4th try, but he's disappointed the repair to the car counts as a failure. #NASCAR https://t.co/zUDxLTMsG1

Forty drivers were entered for the race, so the Hollywood Casino 400 will have a full field.