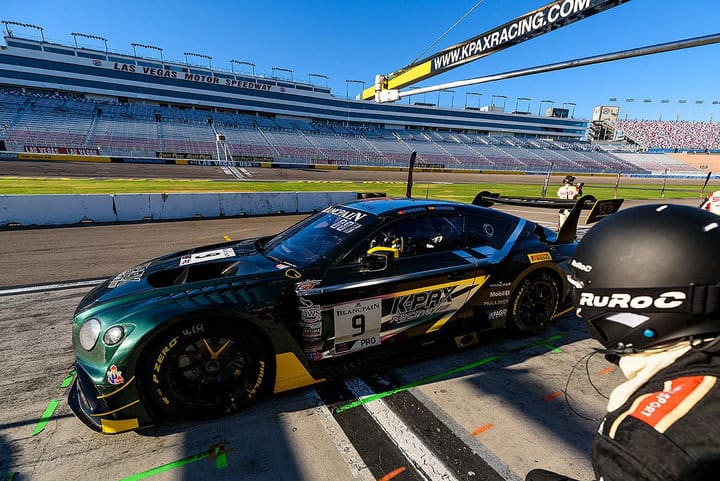 “It’s a little bit different from usual, but everything felt great,” Parente said after the race. “We’ve done a perfect job so far. One more race to go.”

Soucek started from the pole, but Wright Motorsports’ Scott Hargrove made an aggressive move at the start from the second row. He went into turn 8 too deep and technically went off the course. When he rejoined, he was ahead of the pack and proceeded to drive away.

Naturally, that move was not very popular with the stewards. At first, they gave Hargrove a stern warning to not do it again. Later on, the stewards forced Hargrove to give one position back.

On the start, Soucek had actually dropped back to third with Hargrove and R. Ferri Motorsports’ Toni Vilander getting past. A couple of laps into the race, Soucek was able to get back past Molina. By the time the ruling came down, Hargrove already had a three-second lead. He had to back up to Soucek’s Bentley and let him past, which he did on lap 7.

Hargrove was able to keep up with Soucek for a few laps, but Soucek started to slowly pull away from the pack.

The mandatory pit window changed almost nothing at the front of the pack. K-PAX Racing had a stop within a quarter of a second of the minimum allowed. That allowed Parente to keep the three-second lead that Soucek had built. As the race continued, Parente continued to expand his lead and was untouchable as he drove off to victory.

Up until the white flag, the No. 58 Porsche from Wright Motorsports continued to run in second. With barely a lap to go, Patrick Long cut his right rear tire. That ultimately dropped him to a fifth-place finish, fourth in the Pro class.

Parente and Soucek’s margin of victory was 8.405 seconds over R. Ferri Motorsports’ Vilander and Miguel Molina. The No. 3 Bentley of Rodrigo Baptista and Maxime Soulet were third.

In Pro-Am, Gradient Racing’s Till Bechtolsheimer won the class pole and started fifth overall, but quickly lost that lead to Wright Motorsports’ Anthony Imperato. Imperato opened up a small advantage leading into the stops, then had a bad stop.

That bad stop allowed the No. 5 Acura with Marc Miller at the wheel to retake the lead. Matt Campbell in the No. 91 was right on his tail. The two battled for a while before contact was made in the infield. That allowed Campbell to get past while RealTime Racing’s Dane Cameron was able to follow by in his chrome and orange Acura.

From there, Campbell was able to pull away and take the win on the track. However, the stewards reviewed the contact after the race and assessed a drive-through penalty to Campbell. Since this was after the race, it was converted to a 22-second time penalty.

The penalty was enough to give the Pro-Am victory to RealTime Racing’s Cameron and Mike Hedlund in fourth overall. Their margin of victory was 19.106 seconds over Miller and Bechtolsheimer. Imperato and Campbell dropped back to third in class with their penalty. Racers Edge Motorsports’ Martin Barkey and Kyle Marcelli were fourth in their Acura, while Squadra Corse’s Martin Fuentes and Renger van der Zande were fifth in their Ferrari.

The final race of the Blancpain GT World Challenge America season will be held tonight under the lights. The green flag is scheduled to fall at 10:30 p.m. ET. The race will be streamed live at gt-world-challenge-america.com. The race will also air via tape delay Sunday at 3 p.m. on CBS Sports Network.