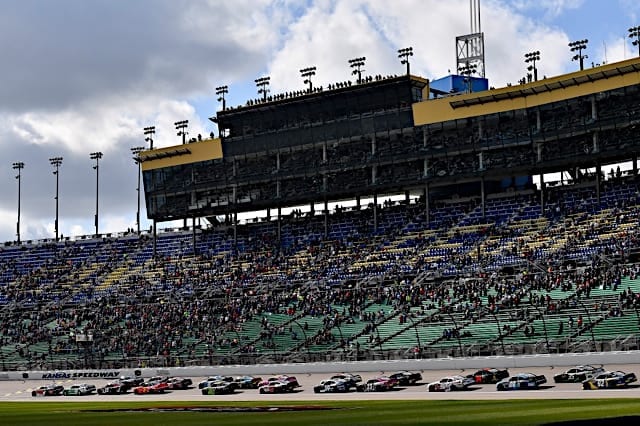 If someone told you that a playoff race featured multiple title contenders caught up in wrecks, a near brawl on pit road after the checkered flag and a first-time winner, you’d probably guess it was Talladega, a short track or maybe the ROVAL. And if we were talking about the NASCAR Cup Series, you’d probably be right.

In the Xfinity Series, not so much. Instead, it’s Kansas Speedway.

Despite being the kind of 1.5-mile intermediate track that often (justifiably) draws the ire of race fans, Kansas simply doesn’t fit that paradigm during Xfinity races. Last year, a multi-car incident took out a bunch of title hopefuls in one fell swoop. The 2019 edition of the Kansas Lottery 300 upped the ante by treating race fans to cars flirting with disaster near the wall all day a la Darlington, one of the most bewildering moves made by a lapped car in recent memory, and Brandon Jones finding his way to victory lane in a national NASCAR series race for the first time.

The truly remarkable part is that there were no signs of the ensuing chaos through the first stage, which was dominated by Christopher Bell the way he’s done so many times this season. Even when Cole Custer rose up to challenge Bell’s supremacy, taking the second stage, it was Bell and Tyler Reddick right behind him. The Big 3 doing Big 3 things.

About an hour later, Bell was limping home in 12th, his main rivals were being physically separated from each other, and Jones was celebrating in a shower of confetti. To quote Anchorman, “boy … that escalated quickly.”

Despite that welcome dose of unpredictability, the Kansas Lottery 300 didn’t do all that much to shake up the championship picture. Had someone outside the Big 3 but still alive in the playoffs won, we might be discussing a scenario where another surprise winner at Texas or Phoenix would keep one of the favorites out of Homestead. Jones, who said he “knew” he would run well at Kansas after being eliminated from contention, probably just kept that from happening.

Still, it’s hard to argue against the idea that racing is most fun when it doesn’t stick to the script, and for whatever reason, this track freelances in entertaining fashion. Here’s hoping that never changes for this series.

There needs to be a fourth driver going for the crown at Homestead, so why couldn’t it be Chase Briscoe? Until he got involved in a wreck that wasn’t his fault (and will be the subject of its own section later in this column), it looked like he might have the fastest car when it mattered most, continually skipping ahead of the field on restarts during the race’s final stage.

Even after he was forced to pit to repair his No. 98 Ford — because driving around with no rear bumper is against NASCAR rules, it turns out — Briscoe still managed to drive his way back into the top five, eventually ending up third. He’s peaking at the best possible part of the season, and his team is clearly more confident than it was a few months ago.

Since finishing 35th in the second Daytona race, Briscoe has finished outside the top 10 just once, and even that was an 11th-place result. He may not even need to win to reach the Championship 4 as he’s very much alive in points, and if he makes it, he would be the very definition of a live underdog.

As long as no one is seriously hurt, NASCAR fights aren’t inherently bad, as they keep the fans fired up and are preferable to drivers tearing up equipment seeking on-track justice. The run-in between Custer and Reddick after this weekend’s race wasn’t really a fight, though, as crew members jumped in way too quickly for any punches to be thrown, much less land.

Considering Reddick is not that big and ended up on the bottom of a pile of humanity, there’s a discussion to be had here about whether said crew members being too enthusiastic could have been as dangerous as fists hitting faces. Fortunately that wasn’t the case, but one of the Big 3 getting hurt in a scrum during the playoffs would have been a red mark for NASCAR worse than the one on Reddick’s face.

Also bad for NBC was the failure to foresee that Custer might have used some foul language when walking over to Reddick, as an f-bomb clearly made it onto the air. I’m not offended by that, but some people probably are.

Lapped cars often draw the wrath of top drivers for circumstances that aren’t actually their fault. Unfortunately for Garrett Smithley, this was not one of those cases.

While watching live, the only possible justification this writer could come up with is that Smithley knew Bell was coming fast on the bottom and didn’t know Briscoe was up high, so he was drifting up to get out of the way of the No. 20 Toyota. That still wouldn’t be the “correct” move — most people agree that if you’re a lapper, you should just stay in the lesser used groove and let the faster cars drive around you — but at least it would be … uh, something.

Instead, Smithley claimed to not know either of the leaders was there, and while that in turn causes fingers to be pointed toward his spotter, the driver took all the blame on himself after the race.

Absolutely gutted for @ChaseBriscoe5 and @CBellRacing I take full responsibility. @FreddieKraft did nothing wrong. Sorry to everyone on the 20 and 98 teams. Feel awful.

The idea isn’t to bury Smithley, because everyone makes mistakes. This was just an ugly one because it came during the playoffs and almost certainly affected the outcome.

When the leaders get wrecked, that’s often a good sign for an underdog or two, and on this particular October Saturday, Jeremy Clements took full advantage. One race after tying his worst finish of the season with a 36th at Dover, Clements bounced back in a big way by coming home sixth. It was his first top 10 since Road America and second-best result of 2019.

“I knew this was going to happen. … But I’m super excited, man. This team has been through hell and back with me for a couple years now. I cannot believe we pulled this off today, and it’s all because of those guys down there.” – Brandon Jones

“I was just frustrated that he [Tyler Reddick] couldn’t keep his car on the bottom, and then runs us up into the wall. If he wants to wreck cars and put them into the wall from time to time, that’s fine, but when it affects me, I’m not going to be very happy with it.” – Cole Custer

“He came up to talk after the race, and he put a hand on me, I put a hand on him back. That’s just how it’s going to be if we’re going to have a conversation that way.” – Tyler Reddick

In a vacuum, Kansas was pretty good. The by the numbers first stage gave way to plenty of drama later, and the shorter length of Xfinity Series races means less waiting to get to the good stuff., and Jones winning was a feel-good subplot.

The thing to remember is that the landscape of the playoffs didn’t change much, if at all. The Big 3 are all but safe unless there are surprise winners the next two races. Texas and ISM can still be huge, though, for someone to step up and join them with a clutch victory.

It’s an off week for the Xfinity championship hopefuls before three straight race weekends to decide who is crowned this year’s king. The final night race of 2019 awaits at Texas Motor Speedway, where Custer is the defending race winner.

This race should of been a victory for Michael Annett. Restarting towards the front, just 7 laps left, the only car with four fresh tires and has Hendricks power. But he couldn’t get it done with all those advantages. Yes Mike, it is time to retire.