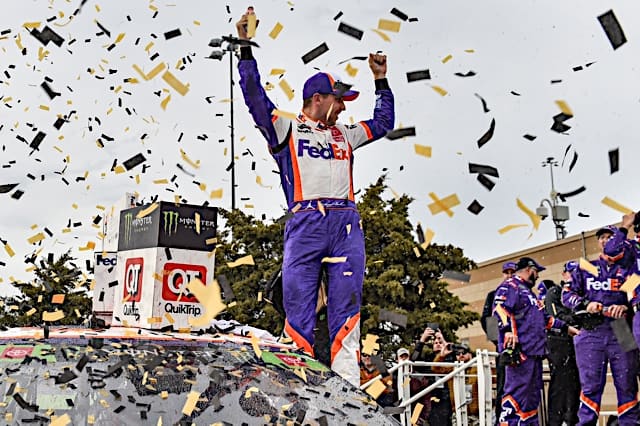 Second place is typically the first loser. But during a wild Hollywood Casino 400 finish Sunday (Oct. 20) at Kansas Speedway, Chase Elliott made it a springboard to a potential championship run.

Elliott failed to catch leader Denny Hamlin during a second overtime restart in the Monster Energy NASCAR Cup Series. Hamlin, who led much of the final two stages, held on for his fifth win of the season, tying the most for him in Cup since 2012.

But Elliott’s late push was enough to cap off an improbable comeback into NASCAR’s postseason Round of 8. Starting the day 22 points behind the cutoff line, he used stage points and that runner-up finish to surge past Brad Keselowski and into the next round of the postseason.

“We were really struggling at one point during the race,” Elliott said. “You need to keep fighting in these things. Back up against the wall, to come out here and battle for a win, that’s what you have to do.”

Elliott’s opportunity came courtesy a flurry of late caution flags. Ryan Blaney blew a tire, bunching up the field with 13 laps remaining when Elliott appeared trapped in eighth place. All lead lap cars then headed for pit road, and crew chief Alan Gustafson made the call to put four fresh tires on the No. 9 Chevrolet.

It gave them the speed to surge to second, slowly marching through the field while chaos ensued in the closing laps. A wreck between Bubba Wallace and Matt Tifft was followed by a crash involving Daniel Suarez, Daniel Hemric and reigning Cup champ Joey Logano. The latter incident came less than a second before Hamlin took the white flag lap to make the race official.

A double-overtime finish ensued where Hamlin was able to hold off Elliott and take the win.

“I’m just really happy for my whole Fed Ex team,” Hamlin said, leading the bulk of his race-high 153 laps in the final two stages. “We just had a race-winning car. The pit crew did a phenomenal job today. Chris (Gabehart, crew chief) made the right call every time. I cannot wait to get to Martinsville.”

The same goes for Elliott, whose late-race push was enough to advance him over Keselowski. A total of 15 stage points to Keselowski’s five closed the gap between them to 14 entering the final stage. Then, Elliott held onto the top 10 while Keselowski’s car lost its handling, losing a lap and falling to the back end of the top 20.

Those late cautions got Keselowski back on the lead lap, eventually putting on four fresh tires in a desperation bid to gain some spots. But on the final restart, the No. 2 Ford got out of shape and gave up enough positions to fall below the playoff cutline. In the end, he came up three points short with a 19th-place finish, TKO’ing his postseason hopes at Kansas a second straight year.

“I appreciate the effort,” Elliott said of his comeback. “A lot of good fortune to have cautions when we did and make the most of those restarts. It was a total team effort.”

Hamlin and Elliott join Kyle Busch, Martin Truex Jr., Kevin Harvick, Ryan Blaney, Kyle Larson and Logano in the Round of 8. Logano was forced to limp home his No. 22 Ford after sustaining suspension damage during the wreck which forced double OT.

“It was hard fought and blue collar round, for sure,” Logano said afterwards. “We just have to smooth it out a little bit. We need to not have as much carnage out there and finish some of these things.”

Keselowski failed to advance along with William Byron, Clint Bowyer and Alex Bowman. Bowman’s chances evaporated just a handful of laps into the race after contact crumpled up the left rear portion of his No. 88 Chevrolet.

“The left rear is probably the most sensitive corner of the car,” Bowman said. “To have a left rear tore up five laps in, we basically drove a wrecked race car the rest of the day.”

Kyle Busch drove to a strong third in the Kansas race, surviving a throttle issue that threatened to derail his day. Brother Kurt Busch rode a strong final restart to fourth after spending much of the day outside the top 10.

Byron wound up fifth while Truex, Erik Jones, Bowyer, Harvick and Jimmie Johnson rounded out the top-10 finishers. Bowman was 11th on a day where Hendrick Motorsports needed to put their best foot forward to advance in the postseason.

Looking ahead to the Round of 8, Kyle Busch resets as the point leader by four over Truex. Hamlin is nine points back while Logano sits in the fourth and final spot.

UNOFFICIAL STANDINGS HEADING INTO NASCAR CUP SERIES ROUND OF 8

Just four races remain in the 2019 Cup Series season with Martinsville Speedway next up on the schedule. The First Data 500 will run Sunday, Oct. 27 at 3:30 p.m. ET with television coverage on NBCSN.