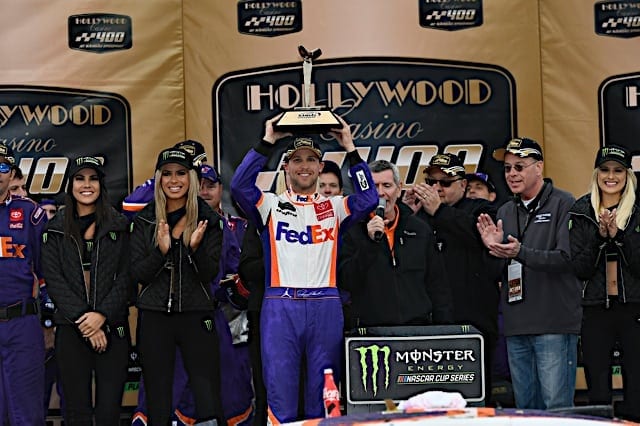 ONE: And Then There Were 8

I’m going to boldly predict that not many prognosticators had Kyle Larson, Ryan Blaney and Denny Hamlin winning the three second stage playoff races, so I’m not going to be foolish enough to make any wild picks for the third round. Given that winning at either Martinsville Speedway, Texas Motor Speedway or ISM Raceway punches your golden ticket to the final four, you’d expect some bold gambles at picking up that all important checkered flag in the upcoming three weeks. Now this isn’t to say drivers will be racing harder, rather it’s that the risk/reward ratio is higher. And with two short tracks in three races and even shorter on-track driver fuses, the chances are we’ll see some histrionics. This is the point of the playoffs, after all, where every error is emphasized and every missed lug nut is magnified. And there isn’t the time or points cushion to make up for a big mistake — or even a medium mistake for that matter.

Of the eight protagonists, Larson and Blaney appear to have the least to lose in terms of pressure. Not many expected them to make it to Homestead with a shot and yet here they are, still racing for the big prize. Four races remain in 2019; the fun gets started all over again this Sunday at Martinsville.

TWO: About That Martinsville Place …

This time last year, at this very stage, Joey Logano leaned hard on Martin Truex Jr. in final corner of the last lap at Martinsville Speedway and held on to win the race. That W booked Logano’s spot in the final four. Three races later, the Team Penske wheelman led the final 12 laps at Homestead-Miami Raceway and secured his maiden title. Post-race at the paper clip, Truex predictably fumed, unleashing a belter of a quote: “He may have won the battle but he ain’t win the damn war.”

But that was as far as the retaliation went for Truex, and Logano’s hard-nosed move won the race, and in the end, so much more. Put simply, it’s hard to overestimate the importance of a win this weekend, especially for those still in contention for the title. The Cup Series has raced continuously at Martinsville since the very first year of NASCAR all the way back in 1949. This will be race number 142, a glorious and historic streak, and proof if ever it was needed that some things just don’t need changing at all. As always, I love a Martinsville race weekend. Roll on Sunday. Should be a belter, to use Truex’s term.

A week after notching a milestone 500th start at Talladega Superspeedway, Clint Bowyer’s eighth-place finish at his home track of Kansas Speedway was not enough to see him survive the end of the second stage playoff cut. But while it was ultimately a disappointing weekend, and the abrupt end of his 2019 championship hopes, the announcement of Bowyer’s return to Stewart-Haas Racing on a one-year deal for the 2020 season on Friday was the really big headline.

“At this point in the game, you aren’t in situations anymore where you put three years together or long-term deals anymore,” Bowyer said of his new contract, extending his tenure with SHR into a fourth season. “I am OK. I was fine with a one-year deal. That is on my end of it, too. I feel like that is where we are at in today’s day and age. I was 100% OK with that.”

Next year will mark Bowyer’s 15th year at the top echelon, a career that began with the rookie class of 2006 which included Hamlin, Truex, Reed Sorenson, David Stremme and J.J. Yeley. 53 races have passed since Bowyer last went to victory lane, one of two races he won in 2018. The first of the pair of wins last season came at Martinsville, snapping a 0-for-190 race streak that ran all the way back to late 2012. What Bowyer wouldn’t give for a repeat this Sunday afternoon.

FOUR: Hamilton Goes for a Sixth

With a win for Valtteri Bottas and a third-place effort for Lewis Hamilton at the Japanese Grand Prix, Mercedes sealed its sixth straight Constructors’ Championship, drawing level with Ferrari who achieved the same feat of six in a row between 1999 and 2004. For the record, Fernando Alonso, driving for Renault, broke Ferrari’s streak in 2005 winning the first of his two back-to-back Formula One titles. Just four races remain on the 21-race 2019 slate and with Hamilton up by an almost insurmountable 64 points over his teammate Bottas, a sixth title in seven years is tantalizingly close. Perhaps, as he has in the past two years, Hamilton will win it in Mexico this weekend even if it’s a track at which he openly describes as “generally our worst race of the year.” For Hamilton, a sixth title, whenever it arrives, will see him sitting in second place outright, one ahead of the great Juan Manuel Fangio and one behind Michael Schumacher. At 34 years of age, in his 13th season, he has won an incredible one third of his F1 races (82 wins, 246 starts) and sits just nine wins behind Schumacher’s 91-win high water mark. He already has the most poles (87) by a staggering 19 and counting over Schumacher (68 poles). The only real question is how will he stack up on the all-time lists when the time comes to hang up the driving gloves.

A couple weeks ago, I wrote about what the “traditional” points would look like if we were awarding the season title based on most points over 36 races. At the time of writing, five drivers were separated by 49 points. Take a look now, following Kansas, and that mythical points battle is even closer with five drivers split by just 30 points. Logano, who was 22 points back at the time, now leads the way by a mere three markers over Kevin Harvick in second and four over Kyle Busch in third. Hamlin is 18 markers in arrears in fourth while Truex sits in fifth, 30 points back. See here on the bottom right hand side of this page. Now I know it means precious little, but it’s still interesting to see just how much parity there is with 90% of the season in the books.