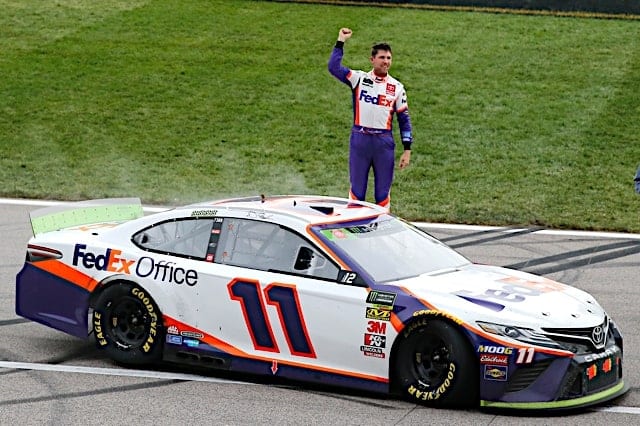 Kansas Speedway was an interesting time. Sunday brought the end of the Round of 12 for Monster Energy NASCAR Cup Series teams, while shenanigans broke out in the Xfinity race. How NBC showed these stories really determined how the broadcast would be perceived.

Sunday brought yet another cutoff race to the Monster Energy NASCAR Cup Series at Kansas Speedway. The result was an up-and-down race that produced increased ratings. Despite that, it really wasn’t the most exciting race.

Now that we’re getting closer to the end of the season and Talladega is done with, the focus is getting even tighter on the playoff contenders. I’ve stated numerous times that I’m not really a fan of this approach since you miss so much doing it.

You had to do something spectacular if you weren’t in the playoffs to really get much of a mention on the broadcast. Daniel Suarez got himself to the front early on and got some dap. Daniel Hemric won the pole on Friday, but really didn’t get much publicity Sunday. That was because of the way the race weekend was set up. People were coming and going like no one’s business. Haven’t seen anything like that since the Trucks were racing at Rockingham. Remember when Paulie Harraka sat on the outside pole there and got lapped in 40 laps?

That said, viewers did get a decent amount of racing on-track Sunday, especially early on in the race. The second half of the race was more or less dominated by Denny Hamlin.

NBC made the decision to have two separate booths for both races in Kansas. One was Rick Allen and Jeff Burton, while the other was Steve Letarte and Dale Earnhardt Jr. This is a setup that NBC has used in the past, especially at tracks with small broadcast booths (Charlotte is a good example). What that resulted in at times was Earnhardt Jr. and Letarte taking small portions of races and calling it themselves. It was a different feel to the broadcast when this was done. The rest of the time, NBC employed a more traditional setup.

Despite the playoff focus, I was still somewhat unclear as to how Brad Keselowski got so bad on Sunday. My best guess is that Team Penske went a little too far trimming the Discount Tire Ford out for qualifying (much along the lines of what happened with Harraka at Rockingham). With an impound after qualifying, that came back to haunt Keselowski.

Post-race coverage was fairly brief on NBC. The race ended fairly close to the 6 p.m. ET sign-off. As a result, viewers there only saw the frontstretch interview with Hamlin before the broadcast ended.

Once things moved over to NBCSN, viewers got a decent number of interviews, but everything surrounded the playoffs. Kurt Busch, who finished fourth, got nothing on-air.

Normally, Cup races give viewers much more to look at than the support events, but this past weekend was the exception. What we got Sunday was playoff focus, some decent racing every once in a while (especially early), and not much else. There was more to look at on Saturday.

Saturday’s Xfinity race will probably be best remembered for the brouhaha that broke out after the race. Admittedly, it’s a little hard to refer to that mess as a “fight.” It’s more along the lines of aggressive holding combined with posturing. Sort of like when a line fight breaks out in a hockey game. Often times, that consists of two people actually fighting and everyone else just grabbing someone else so they can’t cause any chaos. We’ll start there.

The whole mess started on a restart with 10 laps to go. Cole Custer had the lead on the restart with Tyler Reddick second. It looked like Reddick got a little tight on the inside of Custer and drifted up the track. Custer just so happened to be there and no one was going to lift there. I’d argue that there was nothing intentional about that at all.

It was here that Brandon Jones made what turned out to be the pass for the win. Jones’ move was completely ignored. Why? I know we’re in the playoffs and Jones got himself eliminated a couple of weeks ago in Dover. Had he not wrecked on the first lap at Dover, he might have just qualified for the Championship 4 on Saturday. Rule of thumb here is not to ignore a crucial lead change just because that driver isn’t in the playoffs.

Then, you had a caution. Noah Gragson had a tire issue. Knowing that NASCAR threw the yellow here, it would make sense that they threw the yellow when Ryan Blaney had his issue on Sunday. That wasn’t the only thing that happened, though. Joey Gase smacked the wall in his No. 35 Toyota. Apparently, someone decided to drive through him as the yellow was being displayed.

There was a brief replay of Gragson nearly wiping out in turn 1, but nothing of what happened to Gase. As a result, I was a little confused as to what happened.

Then, you have the fracas, which occurred at the same time that Marty Snider was interviewing Jones on the frontstretch. Given the replays that NBC showed, it looked somewhat similar to the Regan Smith–Ty Dillon contretemps at Watkins Glen a couple of years ago. Custer put his hand on Reddick’s shoulder and cussed him out. Naturally, Reddick didn’t take kindly to that. Note that there was an uncensored F-bomb here. That might hurt Mr. Custer in the wallet. Say what you want about profanity, but this race was on over-the-air broadcast television. It’s not 2004 anymore, but the FCC is not a fan of that kind of stuff on live television.

The interview NBC had with Custer was interesting. The man seemingly had no foresight going in. It’s like he had no idea that touching Reddick could set him off. This is day one stuff. If you’re in a tough situation like that and you want to talk it over with your adversary, that’s OK. Don’t escalate the situation in order to make a point. Also, for the sake of saying this, no one “won” this fight. They both made themselves look stupid.

Prior to all those shenanigans, the big story of the day was likely the wreck involving Chase Briscoe, Christopher Bell and Garrett Smithley. Smithley was running 22nd, three laps down and all by himself at the time the leaders came up to him. It seemed like he got loose and that’s what caused him to go up the track. Regardless, Smithley took responsibility.

Absolutely gutted for @ChaseBriscoe5 and @CBellRacing I take full responsibility. @FreddieKraft did nothing wrong. Sorry to everyone on the 20 and 98 teams. Feel awful.

The broadcast booth did lay the blame on Smithley pretty quickly. They stated that he simply needed to stay down [low] and keep out of the way. I’m operating under the assumption that that was Smithley’s plan. He just lost control of his Chevrolet briefly.

It’s pretty clear that the crash changed the outcome of the race. Either Bell or Briscoe would have won had this not happened. I couldn’t tell who it would have it been.

Outside of those two major instances, Saturday’s race was a fairly interesting event. There was a decent amount of racing for position that NBC showed viewers. For the most part, I enjoyed watching the race.

Austin Cindric nearly steamrolled his own playoff chances by getting too excitable. He hit the wall a couple of times, ran into the back of Harrison Burton and damaged his own car. Had either Bell or Briscoe won Saturday, he’d be more than a full race behind fourth in points going into Texas in a couple of weeks. As it stands, he’s half a race out of fourth. There was plenty of coverage of these incidents and how Cindric effectively screwed himself on Saturday.

Aside from the fight fallout, there really wasn’t all that much post-race content. Viewers got two interviews with Jones (frontstretch and victory lane) in addition to the fight coverage. There was a check of the points, and that was about it before the news.

That’s all for this week. Next weekend, the Monster Energy NASCAR Cup and Gander Outdoors Truck Series will be back in action at Martinsville. By all means, it should be an interesting weekend. In addition, Formula 1 will be at the Autodromo Hermanos Rodriguez in Mexico City, where Lewis Hamilton could potentially clinch the World Championship. Finally, the European Le Mans Series ends Sunday in Portugal. TV listings can be found in the television tab.

We will provide critiques of the Cup and Truck races from Martinsville in next week’s edition of Couch Potato Tuesday here at Frontstretch. The Critic’s Annex will take a look at NBCSN’s Glory Road, which premieres two new episodes today on NASCAR’s Lost Tracks and Controversial Finishes.

For anyone not invested in the ‘playoff’ drivers, the race was boring. Covering only 12 drivers just doesn’t cut it. All I heard about was points, points, points! Nascar has found a way to make racing ALL about points after saying they didn’t want to hear drivers talk about a good points day. dreadful.

Like Kyle Petty says, unless you driven these race cars, you don’t know exactly why the driver does what he does! But it looked pretty inexcusable for Garrett Smithley and spotter.
It was funny how Cole Custer crawled untouched from the bottom of that pile of people. That means 12 hands were on Reddick. Someone always gets carried away and grabs the driver aggressively around the neck, like the poleleese in the hood.
Michael Annett should of easily drove away for the win with four fresh tires.
It is tiresome hearing about points, points points.