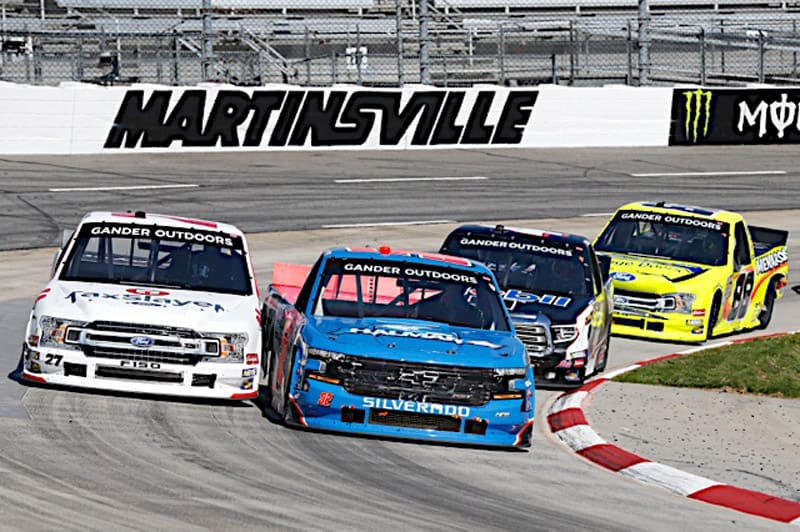 After a week off, the NASCAR Gander Outdoors Truck Series heads to Martinsville Speedway Saturday (Oct. 26) for the NASCAR Hall of Fame 200.

There are currently 32 trucks entered for the race, meaning all will qualify, barring any entry list additions.

Jennifer Jo Cobb Racing has two trucks entered; Cobb will drive the No. 10 Chevrolet, and the No. 0 is yet to be announced.

John Hunter Nemechek is in the No. 8 truck for NEMCO Motorsports.

Codie Rohrbaugh will wheel the No. 9 truck for CR7 Motorsports.

As was previously announced, Tanner Gray will make his series debut in the No. 15 Toyota for DGR-Crosley.

Sam Mayer will make his second career start in the No. 21 truck for GMS Racing.

Another driver debuting this week is Danny Bohn, who will wheel the No. 30 Toyota for On Point Motorsports.

Reaume Brothers Racing Nos. 33 and 34 will be driven by Carson Ware and Dawson Cram; Cram’s entry is via a partnership with his family’s Cram Racing Enterprises, who owns the truck. Ware, meanwhile, will make his Truck Series debut a week after making his ARCA Menards Series debut.

Jeb Burton’s in the No. 44 truck for Niece Motorsports, which was also previously announced.

Lastly, Timmy Hill is set to pull double duty this weekend as he’s entered in the No. 56 truck for Hill Motorsports.