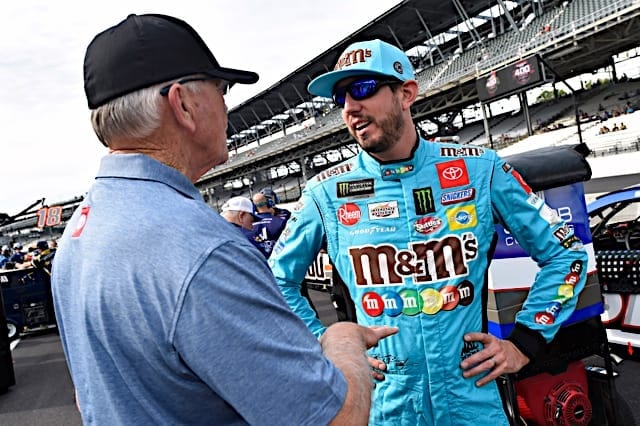 With the Monster Energy NASCAR Cup Series heading to a certain paper-clip shaped venue this weekend, we’d be remiss to remind you that we have seen drivers get very aggressive in the playoff race at Martinsville before. It seems like the last few seasons, the aggression has been escalated just a bit. That leads us into this weekend with the Martinsville race and the beginning of the Round of 8.

How aggressive will drivers become? Is the package a reason for the aggression as well?

While he was more than comfortable heading into Kansas in the elimination race, Kyle Busch had his second-best race of this season’s playoffs this past weekend. However, that has not been a theme for the driver throughout the past month. It is no question he is searching for his first win since June and it has been a little bit of a struggle for him.

Now, though, the stakes are a bit higher. If the win comes in the next three races, it will guarantee him a spot at Homestead.

Has this been Busch’s worst playoff run in several years? What has been his main struggle and can he fix it? Will he make it to Homestead easily or will he be challenged heavily?

Q: How much do you think drivers will risk this weekend at Martinsville? As much as a Truex/Logano or Elliott/Hamlin, or more than that? Gregory S., Mechanicsburg, PA

A: Martinsville could be the race we see drivers be the most aggressive they have been at a racetrack in a very long time. There are several reasons why.

Number one, it’s the final short track of the season. We know how much drivers and fans love them some short track racing, and the show the drivers put on is always phenomenal. Every year, no matter the package, the best races are always at the short tracks throughout all three series.

Number two, it’s a playoff race and the start of the round before Homestead. If one of those eight playoff drivers wins, they go to Homestead with a chance to compete for the championship. The fact that Martinsville could serve as a last-ditch effort for teams whose mile-and-a-half program is not up to snuff, this is their chance.

Martinsville is a mini-wildcard being such a close-quarters track and really, anyone who stays on the lead lap all day can have a shot at the end with the help of a few cautions.

Last but not least, the package. Even though I mentioned before that the package typically does not matter on this type of configuration, it could this weekend. Back in the March race, many drivers complained of aero push, a factor not previously present at the half-mile track. Drivers know going into the weekend that passing could be at a premium and they must take advantage of every shot they are given, especially with the way the package has worked this season. Look for that to be a huge component in the race.

All three reasons listed above will contribute to the excitement the race will give us this weekend. In fact, I expect this to be the best short track race of 2019, even better than Bristol in August.

With a championship berth on the line, expect to see one of the best Martinsville races in recent memory.

Q: Do you think Kyle Busch has had his worst playoff run in the last few seasons this year? Do you see him making Homestead? Travis R., Rock Hill, SC

A: Busch has not made much noise in the playoffs this season, which is extremely unlike him. Every year, we expect the No. 18 team to step up to the plate and win races and easily advance all the way to Homestead. It has not been that easy this season.

From the time the playoffs started in Las Vegas until now, Busch has really only been in contention twice out of the six races so far, those being Richmond and Kansas. Other than that, he has struggled to find success. Does that worry me? Not terribly, because based on history, they will figure something out in the remaining four races.

This may be the toughest road to Homestead for Busch, though. He has won several races the last few seasons in the closing months of the season. He has not won in 2019 since June at Pocono. Though this is worrisome and frustrating for Busch fans, he can easily point his way into the championship race. However we have seen that a win in the last round always is the safest way to get to Homestead.

There are a few teams that are stronger than his at the moment. His teammates Denny Hamlin and Martin Truex Jr. come to mind. Those two should make it to the Championship 4 based on their performance in the playoffs and this year overall, which leaves only two more spots open.

What about a dark horse like Kyle Larson? He could definitely follow up his Dover win with another victory this round and advance to Homestead. That leaves one final spot between five drivers.

Do I see Busch making it? Honestly, yes. Busch will compete for a title at Homestead. Why? He’s Kyle Busch and his team is the strongest team over the last few seasons with consistency and multiple trips to victory lane. He should find a way to win one of these next three races, which could very well be Martinsville this upcoming weekend.

Overall, there is no need to worry about Busch. He will be fine, even though this has been his worst playoff run in several years.

And it sure will be fun to watch.

With Shrub there will be plenty of Whining too……

I am just a parody of parity…

Ahhh I see what you did there ;’D

Keys to winning Martinsville…get the lead. If the spring race told us anything, you do not have to be the fastest car to win. All you have to do is get the lead, we watched Brads bumper gets used up in the spring race but that car never moved up the track, we watched after a couple laps the aero push become to great for anyone to make a real run at the leader. So unless lap traffic plays a role in the outcome…aka NASCAR doesn’t throw a phantom caution, get the lead off pit road and you win.

Kyle should make the final 4 barring no mechanical issues, he is too good at 2 of these tracks to not make the final 4 based on performance, however, knowing his history and with the way this package has neutered his aggressive throttle ability, I do not see him performing well at Homestead. If he wants to win Homestead itll have to be on pit road.

Forbes has a nice article regarding Denny Hamlins post race comments regarding on if he considered making the final 4 or winning Homestead as a successful season. Also, lot of complaining regarding these playoff but ratings here up 20% last weekend…so why would NASCAR think about removing the play off system if ratings are going up? Like I have said before, you want change, you must cast your vote. Complaining about it on forums and social media doesnt change the $$ in the pocket NASCAR gets when you tune in to watch the race (it also doesnt change it by tuning out but does show a “yes” I like this playoffs and tune in to see all the cut off drama, or “no” I do not like this playoff system as it is a crap shoot)

Like Denny said, “…we are not going to let one race dictate whether this year is a success or not.”

I agree but all it will take is two of the longshots to win races in these next 3 (let’s say Blaney and Larson) and then it becomes quite crowded amongst the favorites to make the final four. You have to admit, Kyle has definitely cooled off compared to the first half of the season (or maybe the other contenders have gotten hot).

Not making the noise we have come accustomed to hearing from him that is for sure. But yea it is a long shot lol.

I still wouldn’t bet against Kyle if he makes the final four.

BTW… Dave Caldwell (at Forbes) is must read material for any NASCAR fan. He is one of my top 5 people writing about NASCAR (although he does write about other sports too).

Noted and bookmarked. Look forward to catching up to some articles by Dave when I get spare time :)

Kyle has more interesting post race interviews when he loses…