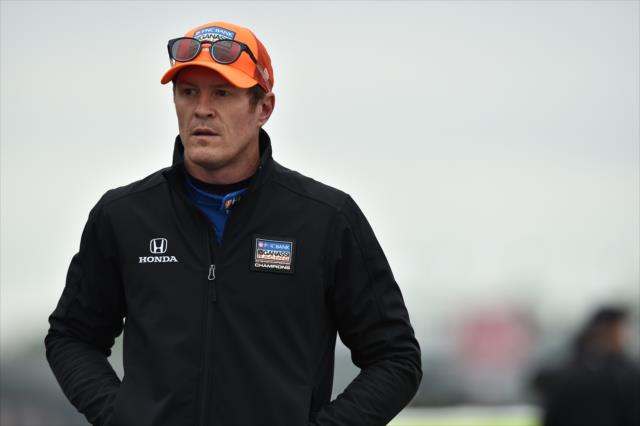 In the world of motorsports, Scott Dixon’s place as a legend is pretty much assured.  In 19 years split between CART and what is now the NTT IndyCar Series, Dixon has 46 career victories (including the 2008 Indianapolis 500) and five championships.

Outside of open-wheel racing, Dixon has dabbled in sports car racing with a good amount of success.  He is a two-time overall winner of the Rolex 24 at Daytona (2006 and 2015) and has raced four times at Le Mans around his INDYCAR schedule.

Dixon took time from his busy schedule at Michelin Raceway Road Atlanta to talk about his 2019 NTT IndyCar Series campaign, his memories of the Ford GT program that concluded in Georgia, and his opinions of 2020.

Phil Allaway, Frontstretch:  This is the last race weekend for the factory Ford GT program. You’ve raced part-time with the organization over the past few years. What will be your biggest memories of the program?

Scott Dixon: Being part of the program for the four years, they’ve done a lot of great things. Winning a couple of [Rolex 24s], obviously, Le Mans on the return for the 50th [anniversary] was a standout. We made the podium in the No. 69. Obviously, the sister car (No. 68) won, but it’s just a testament to what this team is able to do with Chip Ganassi Racing, but also with what Ford’s done with such an iconic car. They’ve modernized it, but also kept the classic lines that it had back in the 1950s and 1960s.

For me, it’s been very prestigious to be a part of the program, especially because of the Kiwi tie-in. The first winning [GT40] at Le Mans was with two Kiwis (Bruce McLaren and Chris Amon), so to try to carry that baton has been fantastic.

Allaway: With the factory deal going away, is there still going to be a chance for you to race in sports cars next year?

Dixon: Yes. This weekend, we’ll be trying to nail down a couple of deals for next year. The main three races in America, Daytona, Sebring and Petit Le Mans. We’ll also try to go do some of the WEC races. Possibly, a doubleheader at Sebring would be a lot of fun.

Allaway: This year, you finished fourth in the NTT IndyCar Series points. You had two victories (Belle Isle Park No. 2 and Mid-Ohio) and 10 podiums, but a couple of DNFs as well due to mechanical issues. How would you describe your season?

Dixon: Actually, I thought our season was really strong. Without the two DNFs and the issues in two of the last three races, Portland and [Gateway], we would have been very close to going back-to-back with the championship. A win at Portland and a top four or five at [Gateway] would have been easy, but that’s racing.

I think the middle portion too with the crash with [Colton] Herta at Texas and getting taken out at Road America [hurt us].  Also, my own mistake at Belle Isle Park No. 1, those were the clear ones that cost us the championship.

But, I’m definitely proud of the team for what we did this year.  It was great to work with Felix [Rosenqvist]. He’s a huge addition to the team and it was great to see him get a few podiums as well.

Allaway: In terms of Rosenqvist, he came into the series with a fairly good pedigree in European feeder series and some sports car experience. Seems like it didn’t take very long for him to ingratiate himself into the team.

Dixon: I think that’s the great thing with him. He’s raced so many different disciplines. I think that everyone knows from his junior categories to when he made it to DTM, Super Formula and even Formula E. He’s a proven race winner and a talent. For us, it made us think outside the box, which was a bit refreshing.

He’s also really easy to work with. His personality blends well with the team. For me, it’s been a lot of fun to work with him. Over the next year or two, I hope that [relationship] expands. Hopefully, we’re both fighting for the championship at the end of next season.

Allaway: Speaking of next year, [Chip Ganassi Racing] is adding in Marcus Ericsson as the team’s third driver next year. Have you been able to spend much time with Ericsson over the past couple of years that he’s been in INDYCAR, and what can he bring to the program?

Dixon: I haven’t spent that much time with him, just in autograph sessions.  There’s not a whole lot of time, given how compact our race weekends are nowadays. I’ve watched him for several years back when he was in Formula 1 and GP2. He seems like a great person and should be a good addition to the team.

It adds a lot of resources to the program. It’s hard right now to compete against the likes of Andretti [Autosport] with five or six cars and [Team] Penske with three. Definitely looking forward to having that part of the program.

Dixon: It’s changed in a lot of ways. Obviously, everyone remembers the split. I was not involved. The series has transformed into one of the few sporting entities that are moving in the right direction as far as viewership, sponsorship and manufacturer involvement. It’s something that everyone can be proud of.

The cars have gone through different evolutions. First, there was the big car with high downforce, then the manufacturer-specific aerodynamics to what we’re doing now. Now, we’re stepping into the aero screen. It’s been fantastic to be a part of it for the past 20 years. It’d be great to do another 20, but I think that would be pretty unlikely.

I’ve enjoyed it and still do to this day. It’s been a lot of fun. It’s good to be with a team that’s been so competitive.

Allaway: You’ve done some of the testing with the new aero screen. What’s the visibility like with it as compared with the trapezoid-like device on the cars the second half of this year?

Dixon: I think that [the aero screen] has a little bit of a way to go as far as trying different conditions. I think the day that I ran it at the [Indianapolis Motor Speedway], it was perfect conditions. It was easy to see. I think they’ve done a lot of homework on it and put a lot of effort into it.

It is part of the evolution of where the sport is going. Visibility has been perfectly fine. We still need to see what it’s like in wet conditions.

Dixon: Definitely unlikely for the team, but for me, we’re talking. I think there’s a few possibilities. It is hard, especially if you’re looking at prototypes or [LMP2], there are requirements. It’s a lot easier to do it with an in-house team.

The first year (2016) was definitely the most demanding since I’d never been there before. I think track time would be perfectly fine and my goal would be to get back there.