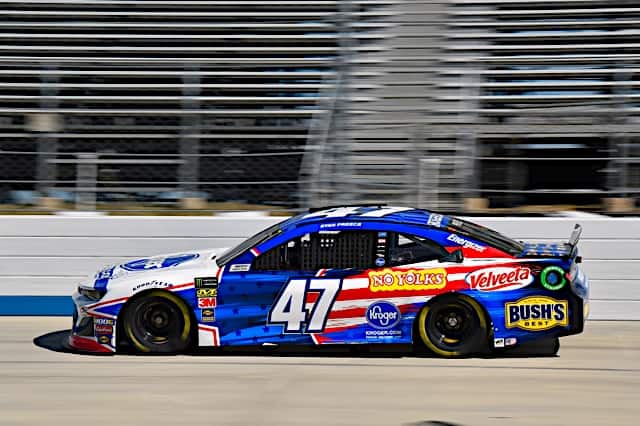 Ryan Preece always seems to be in a good mood, and he had plenty of reason to be following the Hollywood Casino 400 at Kansas Speedway on Sunday (Oct. 20). Preece was the top finishing underdog with his 12th-place finish, marking the third time he has been such in 2019.

It was huge for the team considering how the week began. On the way to Kansas, the team’s hauler caught fire and their primary car was destroyed. The No. 47 crew used a backup car from teammate Chris Buescher and prepared it for Preece to be able to race on Sunday. The effort was remarkable and made the final result that much more impressive.

The rookie driver for JTG Daugherty Racing has been steady and shown flashes of his potential, particularly at superspeedways. However, Sunday’s finish was his best career result on a 1.5-mile oval, the format that makes up the majority of the NASCAR Cup Series schedule.

Heck yeah! P12, we will take that after how the weekend started! Proud of @JTGRacing Daugherty Racing ??@kroger @BushsBeans @NatureValley @Clorox @cheerios

The modified standout has plenty to be optimistic about as the season draws to a close. Next week the series heads to Martinsville Speedway, which is statistically the JTG team’s best. Also, Preece started the last four events of the 2018 Cup season, so he’ll have some additional prior experience to lean on as he looks to finish the year on a high note.

Preece’s teammate Buescher was hot on the heels of his fellow JTG Daugherty Racing driver. Despite announcing his plans to depart the team at year’s end, Buescher has kept up his barrage of top 20 finishes in 2019. The 13th place he scored at Kansas is the 24th finish of 20th or better for the Prosper, TX native.

Also sneaking into the top half of the field was Matt DiBenedetto in the 15th spot, continuing the much improved season for the Leavine Family Racing Toyota driver.

The NASCAR Xfinity Series hit the track on Saturday, and Jeremy Clements was back in a big way. Clements had a streak of nine consecutive top-20 finishes snapped by a disastrous day at Dover International Speedway two weeks ago. He started a new one in remarkable fashion, starting and finishing sixth at Kansas, his fourth top 10 of the year.

Joining Clements in the top ten was Ryan Sieg, who was ninth at the finish. Additionally, Ray Black Jr. and Alex Labbe each enjoyed solid days, coming in 14th and 15th respectively.

Bill France was a fair but stern guy. He was known as “Big Bill” and the name fit his personality even more than it did his stature. When you’re building a sporting empire from the ground up, you probably have to be. One of the most important things to France was that no one person was bigger than the organization. Never was that more clear than at the inaugural race at Talladega Superspeedway in 1969.

Drivers in that day and age had never seen anything like Talladega. Indianapolis and Daytona were the only tracks that rivaled it in size, and most NASCAR participants had never raced at Indy. When teams showed up for the first race at the 2.66-mile Alabama monstrosity, needless to say they had some concerns. After feeling that not enough was done to address their concerns, many of the sport’s top drivers boycotted the race, including Richard Petty, David Pearson, Buddy Baker, Bobby Allison and others.

Undaunted, France went ahead with the show as if to say, “You need NASCAR more than NASCAR needs you.”. The race went without a major issue, and while only 15 cars finished, more dropped out with mechanical problems than crash damage. Relative newcomer Richard Brickhouse triumphed after starting ninth and surviving the challenging marathon. Only the top three cars were on the lead lap at the end and fifth-place finisher Dick Brooks was eight laps down.

Brickhouse had never finished better than fourth prior to that race, nor would he ever do so again. But when the sport’s biggest trophy earners watched from the sidelines, Brickhouse stepped up to claim his place in NASCAR history. Not to mention, France had made his point. NASCAR ran the show and if a driver wanted to participate, they were going to have to do things Big Bill’s way.

.@AlexBowman88 is ready for what he calls a must-win race today at @KansasSpeedway.

He wasn't ready for what @MattDRacing would do to him during this interview. #NASCARPlayoffs pic.twitter.com/FCmLZQS5lK

Really pumped for our run today. We brought a lot more speed. It was great to get a good finish in our @Repairable1 @TeamChevy. We will keep working hard to make it even better. Proud of my guys for their hard work! https://t.co/TdZfUfLuK5

After the No. 47 team's hauler caught fire on the way to the speedway, the team got to work… and the @NASCAR community came together to help. pic.twitter.com/2dDUDMPbFk

What !!! No mention of bubbles, he drove the wheels off that car to finish 35th and y’all ignore him. Yet when he sneezes there are four articles about him. I’ll help ya