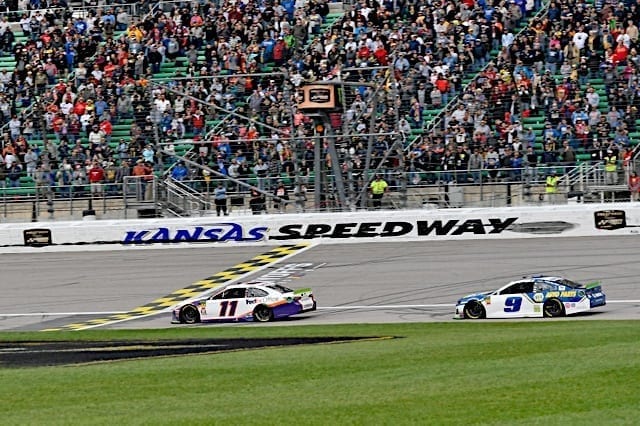 It’s time for short track racing once again. The Monster Energy NASCAR Cup Series kicks off the Round of 8 at Martinsville Speedway on Sunday, Oct. 27 with a three-race sprint to determine the Championship 4. The green flag for the First Data 500 will wave shortly after 3 p.m. ET with television coverage provided by NBCSN.

Cars will use the higher horsepower package without aero ducts, per usual. This handling package has been used at all the short tracks this season with mixed results.

Martinsville was one of the mediocre races. Brad Keselowski flat-out dominated the spring event at the track known as “the paper clip,” leading 446 laps en route to his second win of the season. As shown with this package, passing is very difficult at Martinsville, especially for the lead. The track’s features already emphasize single-file action; it’s the flattest short track on the circuit.

This time around, expect tensions to run high. Eight drivers will be fighting to win and lock themselves in for a shot at the series title in three weeks.

What does their battle mean for fantasy? Well, obviously you will want at least one of them on your roster. More than likely, these playoff drivers will start near the front of the field. Also, keep an eye on drivers with aggressive crew chiefs who might execute pit strategy to get up front. The mechanics who know how to gain track position and the wheelmen who know how to thread your way through traffic are the best Martinsville picks.

Before I move on with my DraftKings selections for this week, let’s take a look at how Kansas Speedway shook out last Sunday afternoon.

Ouch. Had I known that Ryan Newman would start within the top 10, I wouldn’t have chosen him. He crashed out early at Kansas and left a big old negative score on DraftKings. Every other driver finished well except for Kyle Larson, who was running in the top 10 for much of the race. He still had a very good score considering where he finished (14th).

In a $1 single-entry double up, the minimum score needed to cash was 257.75. However, in the $1 Happy Hour contest (a tournament), 280.25 DraftKings points was the lowest winning number.

Hamlin has the second-most wins among active drivers at Martinsville (five). Even though his last victory came in the 2015 spring event, he still has four top fives and five top-10 results since then. The Joe Gibbs Racing driver also led 315 laps in the past nine races. While Hamlin isn’t on a top-five streak like teammate Kyle Busch (eight), he’s performed well and can post fastest lap times that earn you NASCAR DraftKings bonuses.

In addition, Hamlin is coming off a dominating win at Kansas where he led 153 laps and held off Chase Elliott in overtime. Not only does the Virginia native have five wins this season, but he also has top fives at each short track event. One of those was at the second race at Bristol Motor Speedway where he led 79 laps and passed Matt DiBenedetto late en route to victory.

Harvick earned his first win later than usual this season, but he had been earning top fives and top 10s up to that point. He now has three victories so far this year and 11 top 10s in the past 13 races.

Even though the Stewart-Haas Racing driver has a much lower average finish here than at Richmond Raceway (another short track), he does have a victory (2011). Harvick’s on a four-race top-10 streak at Martinsville and totaled up 27 fastest laps earlier this spring. The title contender also knows he needs a good race to help him move on to the Championship 4. If he doesn’t encounter any freak mechanical issues, expect a solid finish.

The epitome of the ultimate NASCAR underdog story, DiBenedetto nearly found his first win at the Bristol Motor Speedway night race this August. Unfortunately, a slight run-in with Ryan Newman set his car off-balance and DiBenedetto had to settle for second place, right behind Hamlin.

Wheeling the No. 95 Toyota for Leavine Family Racing, DiBenedetto has had two other top 10s since that effort. He finished eighth at Darlington Raceway and seventh at Dover International Speedway, both several spots higher than where he began. And in the second half of the year at short tracks, he started within the top 15 at Bristol and Richmond Raceway. That always enhances your chances at a solid finish.

If DiBenedetto’s able to stay near the front, he would earn many bonus DraftKings points at a fairly good price. I think you need to pick him no matter where the No. 95 qualifies.

Buescher doesn’t lead laps and hasn’t finished inside the top 10 at Martinsville yet in his Cup career. So why did I choose this driver?

First, Buescher has the potential to end the race well ahead of where he starts. For instance, in the spring 2017 event this JTG Daugherty Racing wheelman began 33rd and finished 11th. For his price, that produces an excellent value thanks to 22 positive place-differential points.

Second, while he hasn’t finished inside the top 10 at a short track this season, Buescher does have four such finishes this year. The JTG Daugherty Racing driver finished ninth at Atlanta Motor Speedway, then 10th at the first Kansas race and at Kentucky Speedway this July. His best run was a sixth in May’s Coca-Cola 600 at Charlotte Motor Speedway.

Lastly, Buescher got back on track last week after a recent slump and completed the Kansas race 13 positions higher than where he qualified. If he starts 20th or below, he could have a better DraftKings score than what this track history suggests.

Yes. I know he’s only had five top-10 finishes this year and has three low-20 finishes in the last five races. However, Dillon does have a few races where he gained several positions on the track and finished in the top 20. One of those came in the spring race at Martinsville — Dillon ended in 11th after qualifying 29th.

Additionally, Dillon’s posted the fastest lap several times at Martinsville and Richmond. In fact, he started and finished sixth in the spring Richmond event, another sign he can be competitive on short tracks.

Dillon is certainly capable of scoring high on DraftKings, though he does come at a risk.

Like his brother, Ty Dillon can finish further up than where he started. More consistent at than brother Austin, this Germain Racing driver also comes at a discount. The No. 13 wheelman has posted a higher finish than his qualifying spot in four of five career starts at Martinsville. The most notable of these just came this year, as Dillon achieved a 13th-place result in the spring event.

Since his driver generally qualifies 20th or worse, he could provide good value with a similar performance. At this price, that’s really all you need from him.