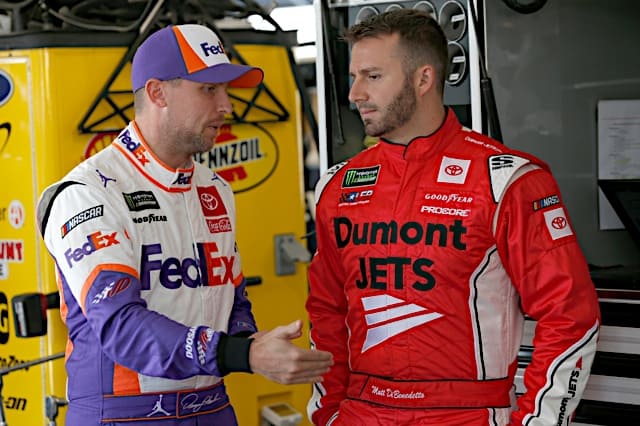 The Round of 8 kicks off with short track racing at Martinsville Speedway this Sunday, Oct. 27, for the First Data 500. The race airs on NBCSN at 3 p.m. EST.

Martinsville is the essential short track. This half-mile flat track affectionately known as “The Paperclip” resembles the local short tracks that many of the Monster Energy NASCAR Cup Series stars grew up racing on. The track has been a staple on the NASCAR schedule since 1949, so racing there is a throwback to the early days of stock car racing in addition to numerous drivers’ roots.

Winning at Martinsville is prestigious with the icing on the cake being the track’s trophy — a grandfather clock. Keep in mind when filling out your daily fantasy lineup that all of the drivers will be going all out to win this weekend, not just the Round of 8.

With just four races left in the season, the playoffs are heating up. Martinsville has been the setting for the most drama-filled playoff races over the past several years. Just last year, eventual champion Joey Logano did the bump and run on a none-too-happy Martin Truex Jr. to win the race and propel himself to the Championship 4. It would not be surprising to see another barn-burner at the Virginia track to decide who races for the title.

Also, with only 0.1 points awarded for each lap led by a driver, the need for a dominator is less important when building a winning lineup. The 500-lap race will have a total of 50.0 points up for grabs in this category. Take note when building your roster and focus on mid-pack competitors who can climb up toward the front on race day.

Hamlin heads to one of his best tracks with the most momentum — winning last week at Kansas Speedway. He’s having one of the best seasons of his career and already has the most top fives he’s ever had in a season (17). There’s no reason that number shouldn’t continue to grow at a track Hamlin has won at five times, good for second among active drivers. He’s also second among active drivers in top 10s and laps led at the track.

The Virginia native’s most recent paper clip win was in 2015, but he came just a few feet away from beating Logano last year for the victory. He finished fifth there this spring and has led laps in 20 of his past 25 starts there. Joe Gibbs Racing has won the last four short track races, and expect Hamlin to lead that charge this weekend.

The last non-JGR driver to win at a short track was Keselowski, who dominated Martinsville this spring. He led 446 of the 500 laps en route to victory that day, meaning if he was in your lineup, you likely won some money.

Keselowski has won two of the past five Martinsville races and led laps in all five of them. He’s finished in the top five in six of the past seven paper clip races and placed in the top 10 in all seven of them. Four times in his career, Keselowski has scored triple-digit laps led at Martinsville. He may have just been eliminated from the playoffs, but he’s still someone to watch this weekend.

Johnson has struggled mightily this season, but he’s still one of the best to ever race at Martinsville. His nine wins there tie him for third all-time and place him at the top of the active drivers. He also leads active drivers in the categories of top fives, top 10s, average finishing position and laps led.

Thirteen times in Johnson’s career he’s hit triple-digit laps led at Martinsville. Granted, none of those have happened since 2014. Johnson has not been as great this season as in the past, but he’s gotten better recently, scoring top 10s in four of the past five races. Don’t expect Johnson to go dominate this race like the old days, but he should do well, especially consider the price range he’s in.

As is the deal with his stats at every other racetrack, ignore DiBenedetto’s Martinsville track record. He is in much better equipment now than any of those previous races — that includes this spring’s when he finished 20th. Leavine Family Racing was working out the kinks of switching to Toyota at that time.

Since then, DiBenedetto has scored six top 10s at tracks where the Cup Series races the 750-horsepower package it will use this weekend. One of those races includes Bristol Motor Speedway where DiBenedetto finished second and almost won before late-race damage. Expect the No. 95 to be fast at this short track as well. Plus, he’s valued so low that you have to consider him for your lineup.

I don’t care what track the Cup Series is at or what his previous results are — when you see Buescher priced in this tier, you grab him. He’s become “Mr. Top 20” after finishing in the top 20 in 24 of the 32 races so far this season and at one point, 16 straight races.

Those aren’t stats that set the world on fire, but Buescher will provide a solid points day and allow you to spend more on elite-tier drivers. You must put him in your lineup.