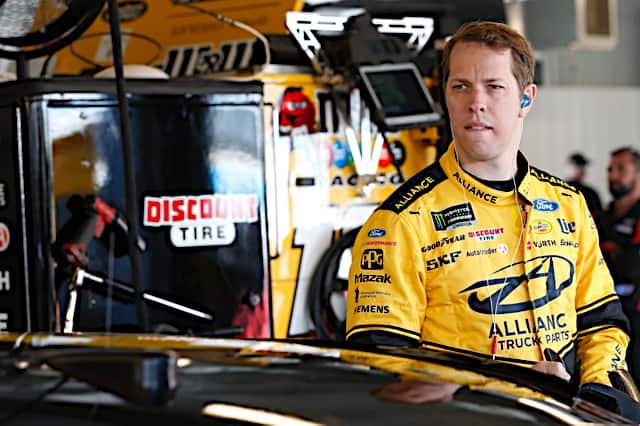 The Round of 8 is set to get underway on Sunday (Oct. 27) at Martinsville Speedway with the First Data 500. Saturday’s two practice sessions were a near repeat from last year with some of the paperclip’s best drivers: Joey Logano and Martin Truex Jr. among the quickest drivers in the opening session, while Brad Keselowski paced the field in final practice.

Logano was quickest throughout the morning session, leading the way at 96.657 mph, close to a tenth of a second ahead of second quickest Truex (96.176 mph).

Playoff drivers outside the top 10 were Kevin Harvick (12th), Kyle Larson (13th) and Chase Elliott (14th). Elliott’s practice was cut short by roughly 45 minutes, as the No. 9 blew an engine early into the session. Because the team had to change the engine, Elliott will start Sunday’s race from the rear of the field.

Prior to opening practice, rookie driver Matt Tifft was transported to a local hospital after being loaded on a stretcher and put in an ambulance. Gander Outdoors Truck Series regular Matt Crafton practiced the No. 36 Ford, recording the 31st quickest time.

In final practice, Keselowski led the way at 96.283 mph, more than a tenth on the field. His Team Penske teammate Blaney was just behind in second (95.762 mph), leading the eight playoff drivers.

After the No. 9 team changed an engine between practices, Elliott finished final practice in sixth. William Byron, Erik Jones, Bowyer and Michael McDowell filled the top 10.

While many drivers were in qualifying trim, most of the playoff drivers were not. Kyle Busch 15th on the scoring pylon, though third among drivers in the playoffs. Hamlin, Harvick and Logano were slotted in 16-18, with Truex and Larson (who turned the most laps in the session at 95) in 20th and 21st, respectively.

For the second consecutive practice, Bowyer was in charge on the long run, making a 10-lap run at 94.488 mph.

Qualifying is set to begin at 4:30 p.m. ET. Kyle Busch is the defending polesitter.