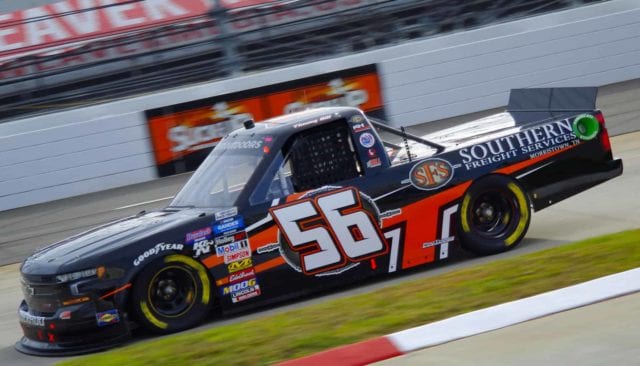 Timmy Hill has been around NASCAR for the past decade, but a little beatin’ and bangin’ on the paperclip of Martinsville Speedway in Saturday’s NASCAR Hall of Fame 200 allowed him to score his career-best finish in the top three national touring series.

Hill began the race from 22nd position. By the end of the opening stage, the No. 56 Chevrolet dropped to 27th. Much like the first stage, the second stage was tame, managing Hill to a 24th-place finish.

But then the storm came.

The final stage was filled with chaos, including seven cautions. In the process, Hill quickly jumped up the leaderboard, finding himself inside the top five with less than 75 laps to go.

Over the final laps, Hill would remain a factor for a top five finish, taking the checkered flag in a career-best fifth.

“It’s a really good feeling,” Hill said post-race. “It’s just two of us working at the shop, me and my crew chief Greg Ely. To pull off a fifth-place finish in our first season – we’re running a part-time schedule, so it’s hard for us to get in a rhythm and get things going. When we come, we prepare our trucks really well and I’m really proud of the effort we put on today.

“This is my first top five ever. I finished sixth and seventh quite a few times, I never got that top five. To finally get my first one, I feel like this is one of the best years I’ve had in my racing career.”

But getting experience and running inside the top five allowed Hill to manage his equipment while all the chaos was surrounding him. And a victory wasn’t out of the question.

Martinsville was Hill’s fifth race competing in one of his own Hill Motorsports trucks. Prior to Saturday, his brother, Tyler Hill, had the best finish for the team (11th at Kentucky Speedway).

In nine total starts between the Hill brothers and Bobby Reuse, Timmy has seen a vast improvement in performance.

Originally, Hill wanted to post consistent finishes in the No. 56 truck. Throughout the opening nine races of the team’s existence, they’ve posted four top 20 finishes, just off par with what the driver/owner wanted.

“All I wanted to do this year was run top 15,” he said of his goals. “I wanted to have something I can build on for next year. I wanted to run a part-time schedule, get a better understanding of how to run a race team and then go into next year running more races and hopes to run a full-time schedule next year. We’re checking all of our boxes, I didn’t know it would be this successful so early. It’s really special and I have high hopes for things to come.”

The team will head to ISM Raceway in two weeks for the penultimate race of 2019; Carson Hocevar will pilot the No. 56 in a partnership with Jordan Anderson Racing. Tyler will end the season at Homestead-Miami Speedway.