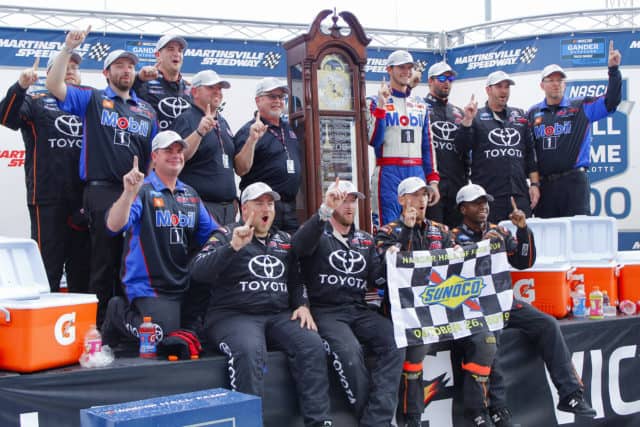 KBM’s Christian Eckes started on the pole for the third time in seven NGOTS starts, but early on, it was GMS Racing in command as defending series champion Brett Moffitt took the lead on lap 2 and held it for the rest of the first stage. Stage one was mostly tame, as a single caution flew, for a Ray Ciccarelli single-truck spin on lap 18.

The drama picked up during the second stage after a yellow for a Tanner Gray spin on lap 78. the leaders pitted, which gave the lead to ThorSport Racing’s Grant Enfinger on lap 82, while Enfinger’s championship-contending teammate Matt Crafton stalled out with engine issues.

On the ensuing restart, GMS’ Sam Mayer took the lead in his second career NGOTS start and held it to the end of the segment, winning the second stage.

When the green flag flew again, it was almost immediately replaced by the yellow, as Niece Motorsports’ playoff contender Ross Chastain slipped past Mayer before the teenager was involved in a wreck that also gathered playoff contenders Austin Hill and Tyler Ankrum, Enfinger and Gilliland, which brought out a lengthy 16-minute red flag on lap 124.

From that point on the race was a series of yellows, as 12 cautions flew in total.  That is tied for the second-most number of cautions in a Gander Outdoors Truck Series race this season with Eldora and Bristol.

With twenty laps to go, yet another caution flew for an axle coming out of  Jennifer Jo Cobb‘s truck, and on the following restart Gilliland passed Chastain for the lead with 10 laps left.

That set up a two-lap overtime shootout that Gilliland survived. KBM teammate Harrison Burton had contact with Chastain on the final lap, beginning a series of incidents. When the dust settled, Chastain finished second, followed by Sauter and Enfinger. Timmy Hill earned a career-best fifth-place finish.

Anybody else lose the video feed from FS1 right as they were going green at the end? We had audio but no video.

Yep. Then when the video did come back, we got a few seconds of a burnout and they went straight to football.

Same out here in California.

It was annoying that they didn’t acknowledge it on the air, though I had to chuckle at the irony of an audio-only call of overtime after Phil Parsons earlier made the slip during an interview with a driver (Ross Chastain?) over in-car radio that he had just mentioned something on the “radio” broadcast, quickly correcting himself.