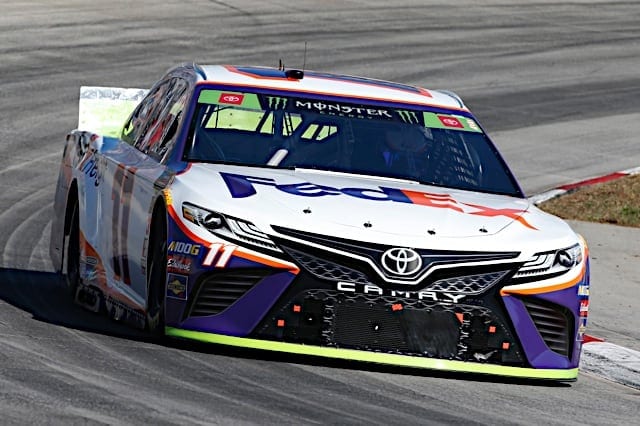 When Denny Hamlin won the pole for Sunday’s First Data 500 at Martinsville Speedway, he became the odds-on favorite for the win.

And though the No. 11 car couldn’t capture his sixth win of 2019, he was the center of attention post-race, along with Joey Logano.

From the drop of the green flag, Hamlin led the opening 30 laps, prior to pitting under a lap 28 debris caution. But his No. 11 team had a bad pit stop, dropping him to fifth on the restart. For the remainder of the stage, Hamlin remained inside the top five, earning nine stage points with a second-place finish.

In the second stage, Hamlin remained near the front. But on a pit stop under a lap 175 spin for Ty Dillon, the No. 11 crew lost more positions, falling to seventh. Hamlin was eighth at the end of the second stage.

Going into the final stage, Hamlin had lost control of the race, and that’s pretty much all it wrote, despite finishing fourth.

“We controlled the race, and then when we fell back to fifth there on that first or second stop, just couldn’t get back,” Hamlin said post-race. “I hate to say it, this is a new Martinsville. This isn’t the Martinsville of old where if your car is really  good you can kind of make it through the field. If you’re behind people, the car had no grip at all, so I was kind of happy unfortunately with fourth.

“It could have been worse, it could have been a spot or two better, but we just couldn’t control the race. We didn’t have a great day on pit road, but those guys have done great for the last six months.

“We scored decent stage points, thought we might have done a little bit better. I’m very eh about today. I expected to win, but we didn’t have a detrimental day either.”

Had Hamlin stayed in front of Martin Truex Jr. following the first caution, he wasn’t sure the No. 11 could hold off the No. 19, as Truex went on to lead 464 of 500 laps.

“Whoever was out front could just run way, way faster than the second and third car,” Hamlin added. “I can’t tell you the difference in my car from leading to when I went to fifth and we changed nothing and I was way slower. You don’t drive any different.”

However, Hamlin’s day didn’t end without some controversy. With less than 50 laps to go, the No. 11 car raced Logano tight off turn 4. The two cars made contact, and one lap later the No. 22 Ford was spinning in turn 1.

While Hamlin finished fourth, Logano was relegated to eighth, racing from outside the top 15 over the final 30 laps.

After the race, Hamlin and Logano chatted about the incident. Following the discussion, Logano shoved Hamlin, where Hamlin went to retaliate but it was split up between the Nos. 11 and 22 teams, though Hamlin wound up on his back from being thrown back by a member of Logano’s team.

“I had a discussion with him two or three times over him blocking me, what he’s doing at Dover,” Hamlin said. “That’s a discussion that men have, but he handles it differently because he’s immature.”

At Dover three weeks ago, Logano raced Hamlin hard while being more than 20 laps down. Ultimately, the hard racing costed Hamlin the stage two victory to Truex.

After the Dover race, Hamlin said because of the way Logano raced other drivers would race him harder. Following Martinsville, he says the two incidents don’t correlate.

“I’ve been fair to everyone,” Hamlin stated. “The [No.] 2 was crazy – just beating our back bumper off. Never was really inside, but would just dive inside and run into us. I kind of just took it all day long. Just take it as in short track racing. He cut me off at the end, that’s short track racing. I don’t like it, but I also understand it’s no big deal.

“We had contact off turn 4, he cut a tire, he got the worst end of it, but that’s short track racing. It’s the same thing he would say if the roles were reversed.”

It’s not the first time the two drivers have been involved in an altercation. Along with the two incidents in the past month, the two went after each other following the spring Bristol race in 2013. The following week Hamlin was spun by the No. 22 on the final lap, allowing Kyle Busch to get by for the victory.

Hamlin enters the second race in the Round of 8 at Texas Motor Speedway next weekend second in points, 24 points above the cut line.

Hamlin wasn’t thrown to the ground by a NASCAR official. It was a fat guy in a red shirt with a Shell logo on it. Think he was one of Logano’s guys.

It was one of Logano’s guys. You can always bet on that. Like Hamlin said Logano has always ran. He is only a big guy when his dad or crew member is leading the charge. Just look at past altercations with Stewart, Harvick, Busch, Hamlin, etc. I wouldn’t have a problem with it if he didn’t go and talk big behind a mic afterwards.

You know what they say about Denny. “If you can’t race ’em, wreck ’em”.