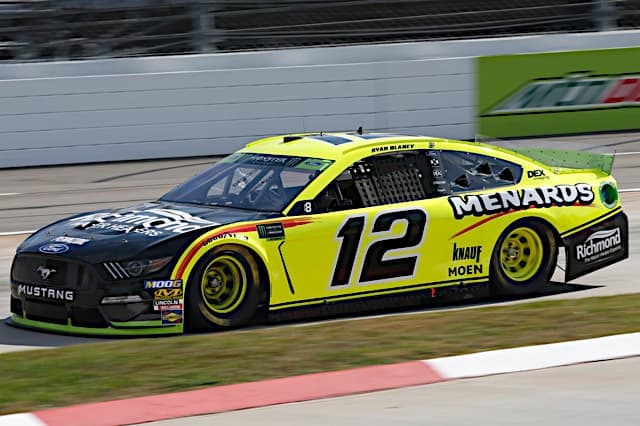 Ryan Blaney‘s statistics at Martinsville Speedway are stellar. He backed that up in Sunday’s (Oct. 27) First Data 500.

Blaney began the 500-lap race from sixth and quickly moved forward. Over the course of the opening 130 circuits, the No. 12 car jumped to third, earning eight stage points.

For the first 120 laps of the second stage, Blaney ran second to eventual race winner Martin Truex Jr. But with a caution for Clint Bowyer with eight laps remaining in the stage, Kyle Larson stayed out, maintaining his track position to finish runner-up in the stage. The No. 12 team finished third, earning eight additional stage points.

In the second half of the race, Blaney remained in the top five, taking the checkered flag in fifth position.

“We were in the top five all day,” Blaney said post-race. “I thought we had a good shot at second. We weren’t good on short runs, we were terrible for probably 30-40 laps. Then we’d come alive and we’d be great. Just didn’t have the speed.”

There was a multitude of restarts where Blaney restarted in either second or third. Because the No. didn’t handle well in the opening stages of a given run, Truex would be gone by the time Blaney had a shot of going after the lead.

“It was amazing how good he could do everything,” Blaney said of Truex. “He rolled the middle great, he could get off the corned good and he just never slowed down. There was one long run in the middle of the race that I ran him down before the second stage – we started to run him down and then the caution came out and it all reset.

“They were incredible. When we were running second before that 50 to go caution, I couldn’t see him. He was that far ahead. Pretty spectacular on their end.”

There were multiple times in the race that Blaney had run-ins with both his Team Penske teammates, Joey Logano and Brad Keselowski. On lap 286, shortly into the final stage, Logano moved the No. 12 out of the way for second position. With 33 laps to go, Keselowski had a similar move, though letting Blaney go by for position the following lap.

Blaney has been outspoken throughout 2019 over his teammates racing him hard, and wasn’t happy on Sunday, especially with Logano.

“The one with the [No.] 2, he dove in there late and he gave me the spot actually,” Blaney said. “The 22 just hit me five times when he got to me. He tried to pass me for five laps and then he just started running me over. I didn’t appreciate that, but all that stuff comes around. It’s just part of Martinsville racing.”

With the series heading to Texas Motor Speedway next weekend for the middle race in the Round of 8, Blaney sits sixth in the championship standings, 15 markers off the cutline.

In the spring race at Texas, Blaney led 45 laps and was leading when his engine expired in the final stage.

“Confident, our car was really good there in the first race this year,” Blaney added. “We were leading when we blew up. Looking forward to going there, we got a lot of stage points today which is nice. Just keep ourselves in the hunt, that’s what we’ve got to do.”