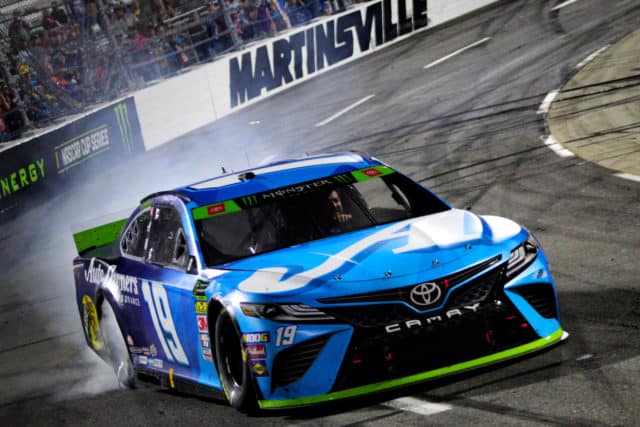 It became crystal clear early on that Martin Truex Jr. had the car to beat Sunday at Martinsville Speedway. He took the lead on pit road early, but from there, nobody could touch him. The No. 19 was strongest off the turns, powering away from anyone who challenged him. William Byron was able to run with him for a few laps on the final two restarts, but couldn’t get close enough to make a run for the win. While others’ cars changed as the sun went down, the No. 19 took very few adjustments all race long.  Truex led laps in his dominant performance, securing his shot at a second title in what’s been a seven-win year so far.

A week after being eliminated from the playoffs, Byron came tantalizingly close to his first win, ultimately falling just one spot short. Byron has shown substantial growth in his sophomore season, making the playoffs and advancing through the second round before falling out after Kansas Speedway.

Both Martinsville races this season were won on a driver’s domination. The finish on Sunday wasn’t as close as it looked. Byron might have had a chance to lay a bumper to Truex on the first or second lap on the last two restarts, but after that he couldn’t get close enough to make a move. In the spring race, Brad Keselowski won by a half-second gap, which equates to a few car lengths.

Is it the current package? It seems as though taking away horsepower at all at this track has been counterproductive. The added high downforce hasn’t done the racing any favors either, but neither has the TV broadcast. The battles for the win haven’t been what fans are accustomed to at Martinsville (though they weren’t the worst finishes we’ve seen by a long shot), but there were plenty fierce ones through the field, some by prominent, popular drivers, who go virtually unnoticed by the cameras, and fans miss out on too much of it. That doesn’t do the racing any favors.

Polesitter Denny Hamlin struggled on his pit road exit, allowing himself to get squeezed a couple of times, costing track position. Hamlin faded a bit after Truex got the advantage, but battled back to finish a solid fourth, putting himself in a great position to make the title race on points. What most people will remember, though, will be a postrace altercation with Joey Logano after the two tangled on track, resulting in a cut tire for the No. 22 car.

Spring Martinsville winner Keselowski had a solid run, finishing third.  In the closing laps, his biggest rival was teammate Ryan Blaney, and the pair wasn’t shy about using their bumpers to make racing room. Keselowski made no concession to Blaney’s playoff status. He wasn’t able to back up his spring win, but he came out on top of a late battle for the third spot.

Active Martinsville win leader Jimmie Johnson had the fastest car on track in the second half of the race but battled track position from the start after qualifying just 24th. He worked his way up to 12th and gaining, but fell back again after a pit road incident with Keselowski.  He worked his way back to 12th and was looking for a strong top-10 run, if not more, but was collateral damage in a frontstretch crash, when Kyle Busch turned Aric Almirola into traffic, collecting Johnson and ending his day. Johnson finished last for the third time in his career and the first time since 2017.

Defending race winner Logano will be remembered for his post-race confrontation with Hamlin than his eighth-place finish.

Is Kyle Busch his own worst enemy? The 2015 Cup champion has struggled a bit this fall, falling short of victory since Pocono in June. He certainly hasn’t been terrible. In that same span, he’s amassed seven top fives and 11 top 10s. But he’s been more and more vocal about how much he dislikes the current race package and frustrated with other drivers being able to race him hard.

Sunday, Busch was working his way forward in the second half of the race when teammate Hamlin bumped him just after a restart to take a position away. Busch then battled Almirola for position, and after what looked like minor contact from Almirola, Busch made an aggressive move into the No. 10, ending Almirola’s day (along with Johnson’s) and costing himself spots. With over 150 laps to go at that point, the move looked to be borne more of frustration than racing for position. Busch is certainly capable of winning any of the remaining races on the schedule and easily at that, but will he execute?

Because playoffs. It’s now just two weeks until the finale, and with the banked 1.5-mile Texas Motor Speedway and the flat one-mile ISM Raceway between now and then, the field is far from set. Truex is a lock, and Hamlin, Kyle Busch and Logano currently hold the remaining spots on points.

Currently below the cut line are Kevin Harvick, Blaney, Kyle Larson and Chase Elliott. 44 points back after a broken axle on Sunday, Elliott will have to win if he has any hope at becoming a second-generation champion this year. Larson is realistically in the same boat as Elliott, needing a win to close the gap.

Of the four, Harvick is probably the most likely to overcome the gap, simply because of his record at ISM. His nine victories there is easily the best all-time at the track, and he’s the defending winner in the fall race at Texas as well.

How… come NASCAR has been so inconsistent with the caution flag?

This was first in the spotlight after the road course race at Charlotte, and again a week ago after the instant late yellow at Kansas, but it reared its head at Martinsville as well. The yellow flew quickly after a few incidents where cars cut tires but then didn’t fly for Logano until he cut a tire until he looped it in turn 1 after he couldn’t get onto pit road. (Intentional? Probably. Egregious? No.).

The problem with the lack of consistency is the appearance of NASCAR attempting to manipulate races. That’s not necessarily the case, but it just shouldn’t be a thing. Obviously there are judgment calls, but there should at least be some hard-and-fast guidelines here. A caution should fly instantly for a blown engine anywhere between the apron and the wall because any fluid on the track is a safety issue. Same for any incident as soon as a car starts shedding debris or the impact is severe.

If a car scrapes the wall or loops with nothing on track, hold the flag if it’s safe to do so to see if he can keep going. NASCAR is much quicker with the yellow in general in the Cup Series, while lettings play out in the Xfinity and Truck series. All three should follow the same guidelines. You can’t predict everything, and safety must always be the determining factor, but finding consistency would only make the races better for all involved.

Ah a yellow flag manipulating the outcome of a sporting event? I have never heard of such a thing. NASCAR use to not be so trigger happy and while I agree with your outlook, however, if someone got seriously hurt or killed cause NASCAR sat on the flag, all those hindsight comments would be throwing a riot. They run the inner liner at short tracks, there should almost be no cautions for tires going down. Also if a car spins at a short track like Martinsville and sustains no damage, they should be required to get the car moving forward again and get back to racing. If a car spun and sustained no damage and they sat there until the yellow flag was waved and instantly got moving forward and are able to continue with just 4 tires and minor repairs (minor would be damage that doesnt require a saw or tape) then they are penalized 2 laps (equivalent to if they would have had to pit). I don’t like seeing cautions being thrown for guys who have tires go down or get bumped and turned around in the middle of the corner and sustain no damage but stil sit there till the caution is thrown. We all know if they sit there, NASCAR will call the caution and maybe they have to for safety. But if thats the case let them get lapped first before throwing the caution.

I wouldn’t say GM is the mouth piece of NASCAR. If they were this Camaro would have had more success. NASCAR has just been awfully inconsistent the last few years. Sometimes they are trigger happy while other times they allow a car to drag along the wall for a while before waving the flag.