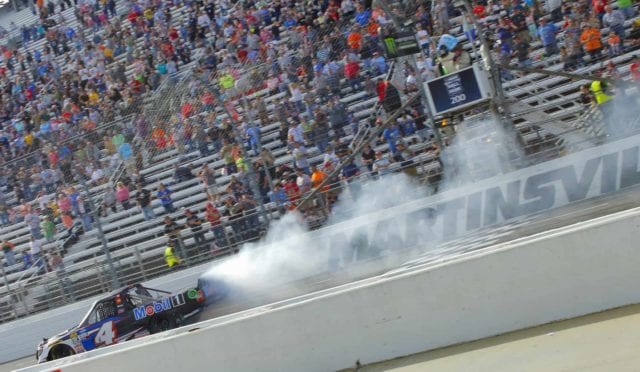 In a Nutshell: Todd Gilliland scored his first career win at Martinsville Speedway Saturday afternoon when he beat Ross Chastain to the checkered flag by almost a full second. The driver of the No. 4 Toyota held onto the top spot during an overtime finish that saw Gilliland’s teammate Harrison Burton spin in the NASCAR Hall of Fame 200 following the 12th caution.

Despite a spin with 50 laps to go, Stewart Friesen recovered to finish sixth, just ahead of John Hunter Nemechek who spun off of Ben Rhodes’ bumper near the end of stage two. Debuting driver Danny Bohn ended up eighth, followed by Jeb Burton, who made his second start of the season. Codie Rohrbaugh scored a career-best finish and rounded out the top 10.

When the checkered flag flew over Martinsville Speedway Saturday afternoon, just two playoff drivers were inside the top 10. Take that a little further back and just half of the current championship contenders were even running by the end of the race.

Matt Crafton was the first to suffer problems. He complained about a power issue on the radio before his truck stalled on the track under the third caution. He initially didn’t pit prior to the stall, along with Chastain and Austin Hill and would have been the leader on the following restart without the problem. Instead, he spent multiple laps on pit road while his team worked to get the truck rolling once again.

The No. 88 won't refire. pic.twitter.com/YqzOmWfA6m

By the time Crafton got the No. 88 Ford refired, the damage was already done and he was forced to ride around, multiple laps down. But getting back out on the track proved to be important as the laps wound down and other playoff drivers faced their own issues.

Brett Moffitt, who led 80 of the first 81 laps found himself deep in the field with nowhere to go when Natalie Decker and Jeb Burton got together. Moffitt already had damage to the No. 24 Chevrolet that the team had tried to repair.

A big pile up in front of @Brett_Moffitt leaves him nowhere to go! pic.twitter.com/FHXfRHhkb1

Just a few laps after the field restarted following that spin, the Big One hit Martinsville, taking a pair of championship contenders in Tyler Ankrum and Austin Hill with it.

Take another look at the wreck that's flipped the script at @MartinsvilleSwy. pic.twitter.com/3EZD9nRf0X

It was at this point where Moffitt’s damage proved to be too much and he retired to a 29th-place finish, his worst ever result at Martinsville. Hill attempted to continue but was ultimately forced out of the race with crash damage.

“The engine ended up shifting a couple of inches,” Hill explained. “Ultimately when we went back out and the oil belt flew off so that ruined our day.”

Meanwhile, Ankrum’s team took to beating and banging on his truck – literally – to get him back out on the track. But that return to racing was short-lived as he was black-flagged for failure to meet the minimum speed under the Damaged Vehicle Policy.

FROM THE TOP ROPE pic.twitter.com/6aLZ8BFUqs

Ankrum and Hill ended up 25th and 26th, respectively. Crafton, through staying out on the track and logging laps despite not being in contention to win, gained eight spots in the finishing order and did the best he could to minimize the damage of the early engine problem.

When is FOX Sports 1 going to learn not to schedule things so closely? The network allowed just a two hour window to fit in a 200 lap Truck Series race at a track that we know will average double-digit cautions.

Clearly that wasn’t enough as it immediately switched to the college football broadcast without any post-race coverage. That’s right… zero. No post-race winner interview, no full finishing order, no check of the points. Nothing.

But to make matters worse, the network also managed to completely miss the finish. Just as the field was about to take the green flag for the overtime finish, the feed cut out completely. Viewers were treated to a distant audio call of the finish and this screen. Video didn’t return until Gilliland was already in the middle of his burnout.

To add insult to injury, once the video feed returned, FS1’s answer was to show a couple of loops of Gilliland’s burnout before quickly stating they needed to get to college football. While the announcers on the football broadcast apologized for the “technical difficulties” during the final laps of the Truck Series race, it’s ridiculous that no one on the race broadcast even acknowledged it.

For those who didn’t get the finish at home, here it is:

In all reality, the actual video feed loss was more than likely just poor timing. No one in their right mind would intentionally do something like that at the end of the race… period.

But with that said, FS1 still botched the whole thing. The football game was already being broadcast on FS2, so it’s not like it wasn’t airing, even if it weren’t in the place it was scheduled to be. It’s not the first time something like this has happened where a race ran long and they had to join something else in progress. In fact, there have even been times when another sporting event ran long and NASCAR had to start on a different channel. Why the sudden urgency?

Frankly, a simple apology and a quick replay of the finish would likely have been enough to at least soften the blow to everyone that missed seeing the finish live after watching the chaos that was the rest of the race. Instead, the @NASCARONFOX Twitter feed posted the finish and a couple of post-race interviews, which instead increases the impact of the failure to show post-race coverage live.

The solution to the issue? An early Sunday morning re-air rather than addressing the problem in the first place.

The Martinsville Truck Series race will re-air in its entirety, including the finish, winner and other post-race interviews, Sunday at 9:30am ET on FS2. #nascar @NASCARONFOX

Wasn't tense enough for you?

We're going to have a green-white-checkered finish at @martinsvilleswy. pic.twitter.com/PqFMULPE3G

Points Update: Despite his DNF, Brett Moffitt still holds a 10 point lead over Stewart Friesen, but perhaps what’s more important is that he’s a solid 45 markers ahead of Matt Crafton, who currently sits fifth. Ross Chastain, after crashing out at Talladega Superspeedway two weeks ago, is third, 15 points behind Friesen, while Austin Hill is fourth with a nine point cushion over Crafton. Ankrum finds himself 15 points below the cut line for the Championship 4 heading into the off week.

Up Next: The Truck Series takes a weekend off before heading to ISM Raceway on Saturday, Oct. 26. Coverage for the NASCAR Hall of Fame 200 begins at 1:30 p.m. ET on FOX Sports 1; the race can also be heard on your local MRN affiliate and SiriusXM NASCAR Channel 90.

Best wishes to Matt, I hope his tumor has not returned.

Regarding FS1, they couldn’t wait to switch over to football. If there was a “glitch”, they could have taken 2 minutes to show a replay.

Finally, the writing has been on the wall for Todd Gilliland not returning to KBM. While I personally don’t have a problem what he said about KB not going to victory lane, I don’t think his comments will help his odds securing another ride.

I thought his dad had a team he could go drive for? I do agree, I have no problems with his comment considering Kyle blasted him.

Fox Sports REALLY screwed up the finish. Action packed race, and they didn’t even have the decency to show a quick replay of the last couple of laps. The football fans were already watching on FS2, so why the overwhelming need to switch IMMEDIATELY to the football game? Can’t you wait another 60 seconds to show everyone who had been with you on the race broadcast for the last couple of hours what actually happened? Completely amateur move from FS1.

I watched the re-play of the Truck race so I could see the finish. I am not on any Social Media. The audio quality was completely different than the live broadcast. Harrison Burton spins out in turn 2 in front of the whole field of cars and no caution flag. More inconsistency from NASCAR.