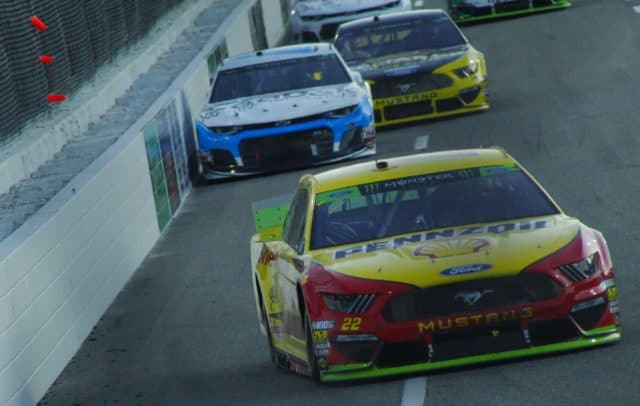 Two years ago, Chase Elliott was upset at Denny Hamlin after being spun out late in the race.  Last year, Martin Truex Jr. was peeved at Joey Logano for late-race contact during a battle for the win.  This time, Truex wound up in victory lane, with Hamlin and Logano scuffling on pit road.

The post-race altercation stemmed from an incident on track with less than 50 laps to go. While battling for a top-five spot, Hamlin washed up the track at the exit of turn 4, leaving Logano with little room.  The No. 22 slapped the wall as a result and cut down a tire a few laps later.  Despite spinning on lap 459, Logano stayed on the lead lap and clawed his way back to an eighth-place finish.  Hamlin completed the race without further incident and wound up fourth.

As Truex celebrated his victory after the race, Logano confronted Hamlin on pit road.  Their conversation was civil until Logano smacked Hamlin’s shoulder and attempted to walk away.  Hamlin, who clearly did not appreciate the shoulder tap, reached for Logano, triggering a melee between the drivers and crew members from both teams.  Most of the physical altercation from that point on involved the crews, with Hamlin and Logano being separated quickly.

Not surprisingly, the two drivers offered differing takes on why the conflict happened.

“We were having a discussion and everything was civil,” Hamlin said.  “And then, like Joey does, he does a little push and then runs away.  So that’s Joey, he’s scared.  I think he said ‘You wanna go?’ and I said ‘Yes, I’m here,’ but then he runs away.

“I got close off of turn four, it looks like we got together,” Hamlin added, “and it looks like, collateral damage, he blew a tire.  But, man, he would probably say, ‘ehh, it’s short track racing.’”

“(I was) a little frustrated with the situation and wanted to talk to him about it.  Maybe I shouldn’t have shoved him at the end, it may have escalated a little bit more, but it’s frustrating, a lot of passion out there.

“I just wanted to see what he was gonna say, and he really wasn’t apologetic at all. That’s more frustrating when someone is like that, isn’t it?  When someone wrecks you and is like ‘eh,’ that’s not really what I was going for there.”

Notice that Logano gave a much more detailed explanation of the on-track incident than Hamlin did.  That is not surprising considering the incident had a much greater impact on Logano’s race than Hamlin’s.  Furthermore, Logano’s frustration with Hamlin is justified.  Sure, it’s doubtful that Hamlin ran him up the track intentionally, but no driver likes to get put in the wall with a championship on the line.  Hamlin’s actions absolutely warranted a post-race discussion.  While that discussion was going on, Logano was in the right – until the slap.

By slapping Hamlin on the shoulder and attempting to walk away, Logano lost the moral high ground.  It was one thing for him to be upset about the situation, but the shoulder smack was disrespectful and an unnecessary escalation of the situation.

Post-race pit road confrontations are always an emotionally charged environment.  Drivers know that if you touch another competitor under those circumstances, fists are likely to fly.

Just last weekend at Kansas Speedway, Cole Custer triggered a similar scuffle after the Xfinity Series race by putting his hand on Tyler Reddick’s shoulder.  Logano has been around long enough to know what can happen if you touch another driver on pit road post-race.  His follow up comments about escalating the situation are proof of that knowledge.

Given their history, it is also curious that Logano expected some sort of apology from Hamlin.  As soon as Logano left Joe Gibbs Racing back in 2013, he and Hamlin had an explosive feud early in the year which ended with Hamlin in the hospital.  The hard feelings left over from that season have simmered back up from time to time.  Most recently, Hamlin was critical of Logano, who was over 20 laps down at the time, interfering with a battle for position among playoff drivers at Dover International Speedway a few weeks ago.  The sequence of events on Sunday night, from the on-track contact, to the pit road confrontation, to Hamlin’s patronizing finger waggle in Logano’s face, to Logano hitting Hamlin’s shoulder, to Hamlin’s squinty-faced and high-voiced impression of Logano, shows that there is no love lost between either driver.

Even after some flat tires and hurt feelings, both drivers are still in good shape points wise.  Hamlin is second in points, 24 above the cutoff.  Logano is on the bubble in fourth, 14 points above the cut line.  It’s still possible that both drivers reach the championship race next month.  Given Hamlin’s resurgence and Logano’s history of strong playoff performances, their paths may cross again at Homestead-Miami Speedway.

If they do, have your popcorn ready.

“I just wanted to see what he was gonna say, and he really wasn’t apologetic at all. That’s more frustrating when someone is like that, isn’t it? When someone wrecks you and is like ‘eh,’ that’s not really what I was going for there.”

Ironic, is it not, that this very same attitude is why Kenseth stuffed his a** in the wall a couple years ago after Joey had wrecked Matt to advance?

Joey always throws a cheap shot and runs away to hide behind his Daddy or crew. I think that’s why I have zero respect for, and basically can’t stand him.

I would add this to why he is not well liked. After running and hiding behind someone he gets behind a microphone and talks the talk.

Joey vs. Denny…. just something for Nascar to put in the TV promo for the next race.

Joey is a punk sss

Not a fan of either driver but it is clear that Joey races like he isn’t out there to make friends and couldn’t care less who he pisses off. In a way an admirable trait for a driver but not very wise when it comes to the bigger picture. I look at this as the chickens coming home to roost. If you aren’t going to care how your actions piss others off, sometimes bad things are going to happen and people are going to run you hard into the wall. Maybe Denny was remembering two weeks ago when Joey was 20 laps down and raced the leaders hard when he had nothing to gain at that particular moment racing those particular drivers.