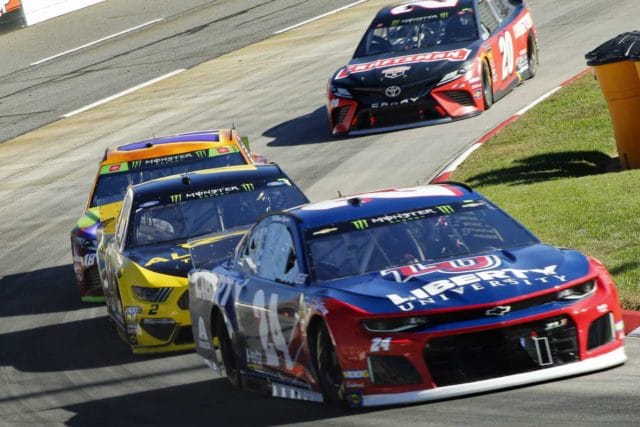 William Byron seems to finally be living up to his potential.

“This was a lot of fun, this was the most fun I’ve had at Martinsville,” Byron said. “It sucks we’re out of the playoffs, but, man, what could have been I guess.”

Byron ran well all day, finishing sixth in the first two stages. The No. 24 seemed to get better and better as the race went on, and Byron found himself next to race leader Martin Truex Jr. for the last several restarts of the day.

The Charlotte, N.C., native made several runs at the No. 19, but could never clear him to lead. On the last run, Byron hung with Truex and made several runs at him, but couldn’t get close enough to try anything. Truex hung on for the win while Byron finished second, tying his career-best. Byron also finished second at the lightning-shortened Coke Zero Sugar 400 at Daytona International Speedway.

“He was really strong,” Byron said about Truex. “I could work my brake bias a little bit in the car and gain a little bit, and then I’d get to him and I’d heat them up a lot and then kind of fall back.

If Byron could have gotten to Truex, he said to get the win he’d have done “whatever it takes.”

“I wouldn’t race him dirty, but I’m really hungry for my first win, so it’s going to — whatever it takes,” Byron said. “But he ran such a good race. I think he would have been able to drag the brake and do all he could to keep me behind him anyway. Close.

“I think we got the closest to him that he had all day in that last run. Honestly, there was a moment in time where if I could have cleared him, I think I would’ve been gone. Just didn’t get that moment, and ultimately, it came down to what it was.”

Crew chief Chad Knaus instructed Byron to cool his tires near the end and save his stuff for one final run. Byron turned it loose with a few laps to go, and the brakes were glowing red as he tried to get to Truex’s bumper.

“I was probably overdriving it a little bit, but you gotta give all you got and hope the car sticks for a couple laps and gives you a run at it,” Byron said.

The result was tremendously better than any of Byron’s other Martinsville efforts. His previous best finish at the Paperclip was 20th.

“This isn’t a place that I’ve loved coming to, and it just clicked this weekend,” Byron said. “Super excited, but second is not super fun either. We’ll try to get one spot better next time.”

Byron earned the praise of team owner Rick Hendrick and for his performance.

“He did a hell of a job today,” Hendrick said. “I was really proud of him.”

Truex jokes that Byron ran so well, he thought Hendrick had put previous No. 24 driver Jeff Gordon back in the car.

“Just watching [Gordon] over the years here, I feel like I picked up a lot of things from him,” Byron said. “The line he runs is kind of unique and it works really well through short runs. So I tried to run that line at the end of the race … It’s going to be fun coming back here now.”

Despite getting eliminated from the playoffs, the 21-year-old continues to improve. He now has back-to-back top fives and looks to maybe score that first career win before the season is over.

“Man, we’ve been running really strong, and I feel like Texas next week is a good opportunity,” Byron said.