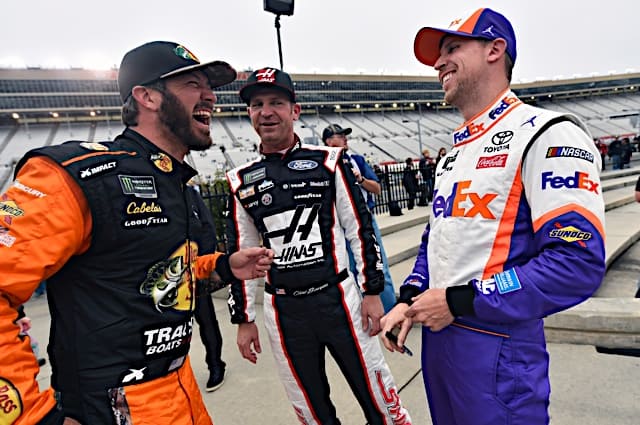 ONE: NASCAR Playoffs All Chalk

Martinsville Speedway marked the start of the 2019 Monster Energy NASCAR Cup Series Round of 8. Just two more races remaining until we have our Championship 4 lineup for Homestead-Miami Speedway.

So far, Cinderella has yet to find a glass slipper.

The theory going into the playoffs this season is it was Joe Gibbs Racing’s title to lose. Kyle Busch was the regular season champion and has made four straight Championship 4 appearances. Martin Truex Jr. was tied for the series lead in wins and had piled up a ton of bonus points. And Denny Hamlin entered the postseason with two victories in the last six regular season races.

Where are we now, seven races in? Truex was the first one to clinch a spot with a dominating performance in Sunday’s (Oct. 27) First Data 500. Hamlin has the most points of the seven drivers vying for three remaining spots. And Busch, despite an uneven playoff performance, remains 17 points above the cutline.

Behind JGR, the school of thought was Team Penske was battling for second best with Stewart-Haas Racing’s Kevin Harvick. So who sits fourth in points? None other than Penske driver and reigning Cup Series champion Joey Logano. Harvick is fifth, the first driver below the cutline and one of two drivers within striking distance. The other is Penske’s Ryan Blaney.

For better or worse, that means the playoffs are going according to plan. All seven races thus far have been won by drivers who not only made the postseason but the semifinal Round of 8. And Brad Keselowski is the only wheelman who might have a case to be in this round who didn’t qualify. A look at the standings if there were no playoff shows every Round of 8 driver would be ninth or better in points.

There’s still time, of course, for an upset to trip things up. But in this Cup Series playoff, the cream has truly risen to the top.

TWO: Martinsville Monotony With This Package

It’s hard to argue NASCAR’s new handling package has worked well on intermediate tracks. Kansas Speedway experienced a 20 percent increase in viewership last week. 14 of 33 races have brought in a larger television audience – the highest number since 2013 – and viewership as a whole is up four percent.

It’s the old package, still used on some of the sport’s smallest tracks, that may actually be starting to trip up the sport. Dover International Speedway a few weeks ago put on arguably one of the worst Cup races ever seen in the track’s history; passing was near impossible. Both Sonoma and Watkins Glen suffered from below average competition compared to their typical yearly excitement.

But one could argue, especially considering the expectations, no track has suffered more than Martinsville. Brad Keselowski dominated the spring race, leading 446 laps in what was a total snoozer. The fall race had a bit more going for it, 11 cautions splicing up the field and leading to some jostling in track position. Denny Hamlin and Joey Logano also assured there would be post-race fireworks after their battle for a top-five spot spilled over onto pit road.

But no one was touching Truex up front. 464 laps led is a modern era record for a facility that prides itself on tight competition. William Byron tried his best but you never really felt like the outcome was in doubt. Early stretches of the race were run single-file, the only excitement surrounding how quickly Truex was able to lap large portions of the field.

NASCAR, understandably wants limited rule changes in 2020 with the Next Gen car on the horizon for 2021. But they really should do something to spice up the short track and road course package. You don’t want your best races to come back down to earth just as you’re trying to raise fan interest in intermediates.

THREE: Eyes On The Prize

Hamlin and Kyle Busch both had rough Martinsville afternoons. Hamlin never truly had race-winning speed after a pole position raised expectations on his No. 11 Toyota. A dust-up with Logano, while exciting for the fans, seemed unnecessary and left Hamlin with an angry rival. Busch, for his part, never matched the speed of his JGR teammates and then got caught up in a mid-race accident with Aric Almirola. Busch was lucky to simply end the day on the lead lap in 14th place.

Busch, especially has been off the mark for much of the past few months. But both men need to sit back and take a breather. Each remains in the driver’s seat for the Championship 4 and are heavy favorites to go the distance. Not only do they have a solid advantage in points, as mentioned above, but each veteran has already won at the next two tracks on the schedule this year. Hamlin took the checkered flag at Texas Motor Speedway this spring while Kyle Busch was victorious at ISM Raceway.

Repeat performances at both these tracks should easily be enough to get them over the finish line. JGR’s speed, along with Toyota’s support, makes it clear that the only obstacle these two have between now and the season finale is themselves.

Hendrick Motorsports had a disastrous Martinsville. Their lone title hope, Chase Elliott, went behind the wall with what initially appeared to be a broken axle. His 36th-place finish makes winning a necessity to make the Championship 4 at Homestead-Miami. Two other HMS drivers, Alex Bowman and Jimmie Johnson, fell victim to accidents and taken out of contention.

That left William Byron to carry the torch, and boy, did he ever. A career-best second-place finish was a big step forward toward victory lane in his second season. Byron now sits 10th in the point standings, the second-highest of all playoff drivers eliminated behind Keselowski.

Most importantly, he’s shown a steady progression throughout all of 2019. Seven of Byron’s 13 top-10 finishes have come in the last 12 races. He’s earned two poles, too, during that stretch to bring his total up to five, tied for the series lead with Harvick.

In the process, Byron has risen to the third-best Chevrolet driver in the standings behind Larson and Elliott. He may not have a victory, but crew chief Chad Knaus has taught the 21-year-old how to close out races. Byron has 10 more lead-lap finishes already (23 vs. 13 last year) and his DNF total has been reduced from nine to two.

It wasn’t enough for Byron to become a title contender this year. But come 2020? It’s not inconceivable to see this young man challenge Elliott for top honors at both Hendrick and Chevrolet. Knaus is sure making the most of his divorce from Johnson thus far.

One of the underreported storylines outside the playoffs has been the 2019 Rookie of the Year race. Daniel Hemric, still searching for a 2020 job, has shown some qualifying speed. He won the pole at Kansas Speedway last week, his fourth top-five start in what’s been a down year for Richard Childress Racing.

But Hemric has found himself in a slump the last 10 races, posting no top-15 finishes since a 12th at Bristol Motor Speedway in August. That’s allowed Ryan Preece to slowly close the gap, posting one top 15 and six top-20 results of his own during that same stretch.

Both drivers were involved in wrecks at Martinsville and finished 17th and 19th, respectively. The runs left the duo tied with only three races left in the year. They’re both comfortably in front of Matt Tifft, the only other rookie candidate who didn’t even race Martinsville due to an undisclosed illness.

While neither one has had the season they’ve wanted, Sunoco Rookie of the Year remains a prestigious award that etches your name in NASCAR history for the rest of time. Losing to Preece also hurts Hemric’s resume when he’s trying hard to remain a NASCAR full-timer with a quality team.

The key for who comes out on top will be who learns from their mistakes. Hemric wrecked at Texas Motor Speedway in the spring while Preece crashed at ISM Raceway. Who can keep their nose clean down the stretch? My money’s on Hemric to somehow hang on, but the fact the race is this close after his early-season lead doesn’t bode well.

“….in what’s been a down year for Richard Childress Racing.”

Don’t you mean a down decade? (and that’s an understatement)

Maybe since the not-as-talented-as-they-think-they-are brothers got to Cup?