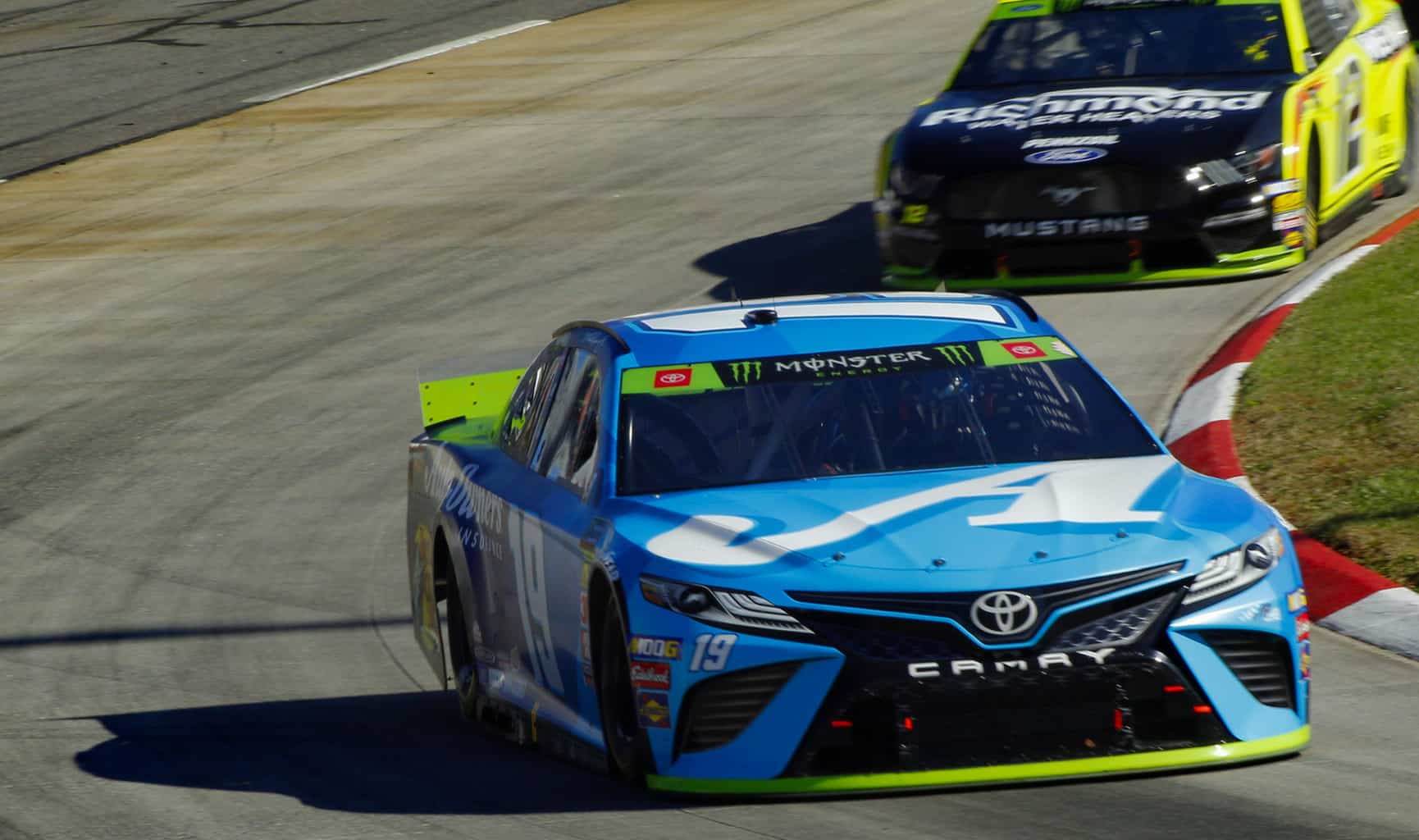 Martinsville Speedway is the oldest track on the NASCAR circuit, but lately the tracks uniqueness has been entirely flattened by awful racing throughout the pack, marked by an inability to pass and one driver pulverizing the rest of the field.

In this case, a snoozer of a race resulted in a Joe Gibbs Racing driver in victory lane, which is pretty much business as usual.

Hendrick Motorsports as a whole had a race to forget at a racetrack that likely is a difficult place to visit for the organization. Jimmie Johnson was collected in Kyle Busch and Aric Almirola‘s wreck, ending in a last-place 38th. Chase Elliott blew an engine in practice and started in the rear, then had a broken axle derail his charge to the front, relegating him to 36th. Alex Bowman was involved in a wreck as well, finishing 16 laps down in 30th.

Team Penske’s trio of drivers all finished in the top 10, as Brad Keselowski was third, Ryan Blaney fifth and Joey Logano eighth. That’s technically good, and Blaney and Logano are both still in championship contention, but both of Blaney’s teammates were not cutting him any slack whatsoever on Sunday, which feels counterproductive to overall organizational success. And then Logano got into a shoving match afterwards with old rival and former JGR teammate Denny Hamlin. So, overall, a weekend to leave in the rearview.

Stewart-Haas Racing maybe had an even worse day than their former alliance teammates. As previously mentioned, Almirola’s day was ended with his wreck that left him 37th. Clint Bowyer had a strong day go up in smoke after encountering track bar problems that left him over 50 laps down and 35th in the running order. Daniel Suarez had a cut tire and was left 12 laps down in 31st. Kevin Harvick did finish seventh, but fought a poor-handling car all day long.

He’s not in playoff contention any longer, but Chip Ganassi Racing’s Kurt Busch finished sixth on Sunday, his third top 10 in the playoffs. For the 2019 season, he has a race win, three stage wins, six top fives and 17 top 10s.

Gander Outdoors Truck Series veteran Matt Crafton had a rough weekend. First his No. 88 ThorSport F-150 endured ECU problems and limped to a 23rd-place finish. Then he found himself as the emergency driver for Front Row Motorsports’ No. 36 after Matt Tifft had an undisclosed medical issue and left the track prior to opening Cup practice on Saturday morning. On Sunday, Crafton was 25th after tangling with fellow NGOTS regular Ross Chastain.

This weekend’s Paint Scheme of the Week is obviously Corey LaJoie with his Scooby-Doo Mystery Machine scheme for Halloween on the No. 32 Ford Mustang for Go Fas Racing. While I find it not quite as fantastic as Matt DiBenedetto’s Peanuts scheme from last season (due to more familiarity with Snoopy, Charlie Brown and the rest – I immediately think Buffy the Vampire Slayer when I hear “Scooby Gang”), it’s still very fun, and more designers ought to consider using lime green, teal and orange together.

While not exhaustively researched, a quick poll among Frontstretch staff has turned up that this is likely the first time Scooby and Shaggy have appeared on a racecar since Jeff Green and Robert Pressley shared the purple Cartoon Network-sponsored No. 29 Chevy Monte Carlo for Diamond Ridge Motorsports in 1996-97.

For more on this car, see the canine sports, entertainment and lifestyle website Dog O’Day.

Honorable mention goes to Chase Elliott, who ran the metallic green Mountain Dew scheme from the Cup Camaro’s debut race in the 2018 Clash, which was also the first-ever winner of this column’s Paint Scheme of the Week award.

My Fronstretch colleague Michael Massie was at the track this weekend, asking all the important questions – like which Scooby-Doo character LaJoie would play, and which other driver in the garage would make a good villain.

And of course the response from alleged Scooby-Doo villain @Chris_Buescher pic.twitter.com/u4Wj2i69hO

Chris Buescher looks pretty thrilled to be playing the bad guy for once, honestly.

Next time your looking at a 9.5 hr drive to come cover our sport for people to read and enjoy I’ll buy your plane ticket. Will be disappointed if you don’t let me know. ? https://t.co/0Zm98O7NF5

This Bowyer tweet is pretty cool. He was less than thrilled with the Kansas City Chiefs’ loss to the Green Bay Packers on Sunday Night Football later on.

Something about this Victory Lane scene of the Monster Girl standing next to Truex towering over him is hilarious. And Truex isn’t that small, either – he’s listed as 5 feet 11 inches (seven inches taller than I am).

While the Gander Outdoors Truck Series is off this weekend, the Xfinity Series and MENCS return to the high banks of Texas Motor Speedway.

The O’Reilly Auto Parts 300 is scheduled to begin around 8:30 p.m. ET on Saturday, November 2, with TV coverage on the NBC Sports Network. I think Cole Custer will lock himself into the finale with his second Texas win and his eighth triumph of 2019.

In Cup, the AAA Texas 500 will be Sunday, November 3 at 3 p.m. ET, with TV coverage on the NBC Sports Network for the final time this season. Denny Hamlin should win his fourth Cup race at TMS and his sixth event of 2019.