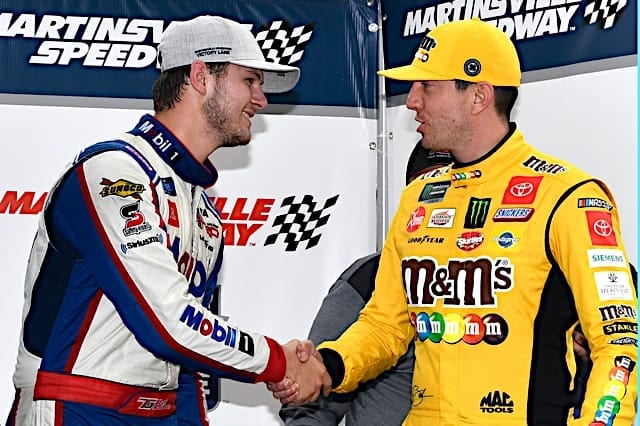 Last Saturday (Oct. 27) was a critical moment in Todd Gilliland‘s career. The second-year Gander Outdoors Truck Series driver had yet to win or make the playoffs for Kyle Busch Motorsports, one of the best teams in the series’ garage.

But Gilliland finally silenced many of his doubters and broke through this past Saturday to win the NASCAR Hall of Fame 200 at Martinsville Speedway for his first career Truck win. The win at one of NASCAR’s most physical tracks proved that he has talent, but what does that do for his future?

Throughout the season, KBM owner Kyle Busch has been critical of Gilliland’s and teammate Harrison Burton‘s lack of production.

“I don’t know how many times last year we were in meetings and I was just yelling at him about let’s go, our s#%t is not that slow,” Busch said about Gilliland back in February at Atlanta Motor Speedway. “You gotta get up on top of the wheel and make it happen … His career is on the line. You don’t get many chances at this.”

Back in June, Busch graded his truck team’s performance a 2 out of 10 and said the duo of Gilliland and Burton “ain’t doing s#%t.”

How do comments like that affect the psyche of a young driver? It certainly added pressure to Gilliland.

“I don’t think it affected me really,” Gillliland told Frontstretch before the race this past Saturday. “I go out there and do the best I can every week, and there’s only so much you can do. I feel like I’ve made a lot of mistakes, but at the same time, like I said, it’s not all on me, not all on my crew chief, not all on the team. It’s just a bunch of different things. One week, it might be something — one week, it’s another. All you can do is control the things you can control, and I’m just continuing to try to run the best races I can.”

But when Gilliland finally got that checkered flag at Martinsville, he sounded off on the team radio about his team owner in the heat of the moment.

Audio proof of what the 4 radio was on the last lap#NASCARHall200 pic.twitter.com/7S527w04E8

“I thought we were never gonna win. You guys are the best. Kyle Busch, you can stay in your f#%ing motorhome,” Gilliland said on the radio transmission.

And in the media center after the race, Gilliland admitted he said it in the heat of the moment, but he didn’t exactly apologize until a tweet later that evening.

“I kind of wish I hadn’t said it now,” Gilliland said. “He said some stuff about me. It is what it is.”

Like I’ve said before we should have won by now and it just hasn’t happened. I want to apologize to @KyleBusch for what I said after the race. My emotions got the best of me obviously and a lot went through my head as I took the checkered. Two more wins to chase?

Busch didn’t comment on the situation with Gilliland when asked on Sunday night (Oct. 27), but he did congratulate Gilliland in victory lane. Granted, Busch may not have yet heard what Gilliland said on the radio at that time. Still, all of this begs the question of whether Gilliland will be back in the No. 4 Tundra next year.

“I’m not sure yet,” Gilliland told Frontstretch. “We’re still working on some stuff. So I’m just trying to finish out the season strong.”

Should Gilliland not return to KBM, one advantage he has is that his father, David Gilliland, is a co-owner of DGR-Crosley. The younger Gilliland has driven for the team some in the ARCA Menards Series and K&N Pro Series East, and David was his spotter when he was coming up through the ranks, but no word if Todd would return there should he not be with KBM next year.

“I just want to race, I’m a racer,” Gilliland said when asked if he would ever want to race for his father’s team. “It’s my hobby, now my career, that I love. I just want to keep racing. I love going to these racetracks, I think it’s so cool walking through the tunnel every week. Going to some of these racetracks that you’ve watched on TV since you were a little kid.

“My dad spotted for me in K&N, we won a lot of races together. I’d say we’re pretty close. I still talk to him a lot during these race weekends. There’s just a lot of guys over there [at DGR-Crosley] that are my friends more than anything. Me and my dad get along really well though. Sometimes, he thinks I should do something different, but he knows at the same time, he’s a driver, he’s been in every position, so I think he gets it pretty good.”

Gilliland has actually improved from last season to this season. Last season, in 19 starts, he notched four top fives, nine top 10s and an average finish of 12.5. This year, in the 21 races so far, he has one win, six top fives, 13 top 10s and an average finish of 10.6. The problem though is he hasn’t improved to the standards of previous KBM No. 4 drivers Erik Jones and Christopher Bell, who both won the Truck title.

Additionally, Gilliland hasn’t made the instant splash he made in ARCA and the K&N Pro Series East and West, where he won in his debut in each of those three series. In fact, he won three in a row to start his K&N West career, followed by two championships in the series. The Martinsville win could be the sign that Gilliland has finally gotten the hang of the Truck Series, but it certainly took him longer to adjust.

“That’s the thing, I don’t feel like it should be that much harder,” Gilliland said about moving up to the Truck Series. “It’s the same chassis, same everything, you’re just driving on a little bit bigger racetracks. I don’t know, it’s just the drivers obviously get better and better every step you go up. Even me and Harrison [Burton] were both winning and we battled for a championship in K&N the year before we both ran Trucks. I think Trucks are just a little bit different in general, but overall, I’d say just the competitiveness of the series.”

Gilliland and Burton find themselves competing for a spot in points once again, but this time it is for 11th in the Truck Series standings. Gilliland currently has a 15-point advantage, and both could realistically crack the top 10.

“Yeah, I mean, we both have sucked, honestly, so that doesn’t really matter … But it’s still something you pay attention to,” Gilliland said about the points battle with Burton. “Basically, points are where you ran throughout the whole season. We’re still going to try to go out and get as many points as we can. It definitely hasn’t been enough, obviously, throughout the season. I wish we could have done better at some points. But I think it’s helped a lot having him [Burton] no matter what. Even through the times we’ve both struggled, we’ve worked well together. Harrison has been a great teammate to me.”

Their career paths paralleled up until this point but will split apart next year, as Burton will move up to drive for Joe Gibbs Racing in the NASCAR Xfinity Series.

“Not really, you know, it’s racing,” Gilliland said when asked if he was jealous of Burton getting the ride. “Pretty much, the Cup Series is just opportunity and what you do with it. This is his opportunity. I wish I would have gotten at least a couple Xfinity starts this year just to see how I stack up. But I guess it’s all based off results, and we just haven’t had them this year. It’ll be cool to watch him move up there, and hopefully, we can race with him at some point again.”

For now, Gilliland is trying to end the 2019 season on a solid note. He’s got a wave of momentum now with three straight top fives including the win.

“I think just trying to win or be more consistent,” Gilliland said his goals were prior to the win. “You know, that’s been our goal the whole year: be more consistent and race within the top five, top 10 all throughout the race. The last couple weeks, we’ve been able to do that.”

He didn’t silence the doubters. He just got it right once. Not saying much when your always driving the best trucks in the race..

No owner wants a driver with more mouth than talent.

If anyone can understand saying something in the heat of the moment, it is Kyle Busch. Gilliland should just leave KBM. You can’t unring the bell. It won’t get better, even if you do win again. Race owners/drivers don’t forget.

Try to get something going with DGR-Crosley, like Grahm Rahal did with his father.