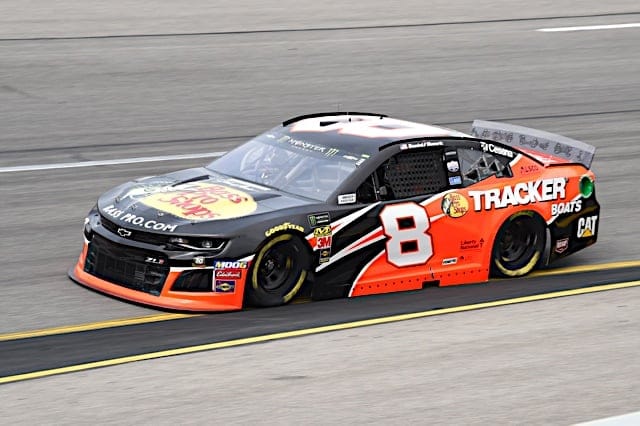 The closest points race in NASCAR right now isn’t necessarily a battle for the championship.

Sure, there are few clear favorites for titles in the Monster Energy NASCAR Cup Series, the Xfinity Series and the Gander Outdoors Truck Series. With two or three races to go in each series, there’s a sense that the championship chase feels wide open, and not just because of the Championship 4 race at Homestead-Miami Speedway that determines the victor with a one-event shootout.

But it’s important not to sleep on another somewhat important battle in the Cup Series: the distinction of rookie of the year.

Entering the 2019 season, four drivers had declared for the rookie standings. One, Quin Houff, has competed in a part-time schedule for Spire Motorsports and Premium Motorsports. The other three — Matt Tifft, Ryan Preece and Daniel Hemric — were full time, setting up what could have been a fairly tight race for the 2019 rookie of the year designation.

After all, Tifft, Preece and Hemric all had similar results coming up in the national series of NASCAR before their first full-time Cup seasons. Preece led the way thanks to a pair of wins with Joe Gibbs Racing in the Xfinity Series, but neither Tifft nor Hemric were slouches either; neither had a national series win, but Tifft landed a pair of points finishes in the top 10 for JGR and Richard Childress Racing in Xfinity, while Hemric made Xfinity’s Championship 4 in two seasons with RCR.

Tifft eventually lagged behind a bit, even before last week’s medical emergency that has left him out of the series for the remainder of the season. It made some sense; Tifft’s Front Row Motorsports team is a bit behind JTG Daugherty Racing (Preece) and certainly a lesser organization than RCR (Hemric), and a rookie driver in that equipment was probably never going to shine too much outside of Daytona International Speedway or Talladega Superspeeday, if even there. Sure enough, in 32 starts, Tifft scored just one top 10 and is likely to finish 31st in points.

Yeah, seriously. Tied. Entering the series’ 34th race of the season this weekend at Texas Motor Speedway, both Hemric and Preece have 267 points on the season, placing them in a tie for 25th in points. Before 2018, the Cup rookie race was subject to a points system that differed from the overall championship standings, but that’s changed, making the rookie battle more easy to follow.

Through 33 races, Preece has the slightly better season on paper, just because of one key metric: top 10s. He has one top five and three top 10s in 2019, his best finish a third-place run at Talladega’s spring race. Meanwhile, Hemric has a top five but one less top 10 (two total), his best run a fifth in the same Talladega race. (He does, however, have a pole, coming two weeks ago at Kansas Speedway.)

So who’s gonna be Cup’s rookie of the year for 2019? Hemric or Preece?

Let’s start at Texas. Hemric’s one Cup start there this spring resulted in a 33rd-place run, while Preece has two starts, the first coming in 2015 (36th) and the second, from this spring, a 22nd-place result. So Preece, right? Well, keep in mind that despite Hemric’s lackluster finish, he started the race seventh. Also, Hemric’s Xfinity results at the track include a top five and two top 10s in four starts, plus a top five and three top 10s in the same amount of Truck starts. Preece? One top five in four Xfinity starts.

Hemric gets the advantage. Slightly.

ISM Raceway comes next. Hemric finished 18th there this winter, and Preece hasn’t finished better than 34th in two starts. On the Xfinity end, Hemric has top 10s in all four of his starts with an additional top five, while Preece finished fifth last year with JGR. Hemric’s Truck starts there aren’t incredibly encouraging, though, never finishing in the top 10 in three starts.

Again, Hemric seems like the driver who’ll get the edge.

Finally, Homestead. There’s less to go off for Hemric there since he’s never made a Cup start at the track, and same goes for Preece, who at least has Cup experience there due to his 2015 start with Phil Parsons Racing that resulted in a finish of 38th, but given the No. 98’s overall ability no matter who drove it, it’s tough to base anything off Preece’s starts in those cars. As for the Xfinity Series, Preece has a top five and two top 10s in four starts, and Hemric snagged a top five in two starts. His Truck Series races at Homestead are slightly stronger (one top five and two top 10s in three starts).

Still? Perhaps Preece is better off, given his Cup experience at the track coupled with similar results to Hemric on the Xfinity level.

There’s really no definitive conclusion to be drawn as a result. Neither driver stands out drastically against the other at any of the three tracks, and while Hemric may eke out an advantage overall, all it takes is one untimely crash or parts failure for Preece to pass him in points. And vice versa.

Plus, Hemric is officially in lame duck territory, as it’s been announced he will not return to the No. 8 ride in 2020, whereas Preece looks to be set at JTG next year as a teammate to Ricky Stenhouse Jr.

Either way, remember over these final three weeks that there’s more than just the hunt for the overall Cup title happening. A rookie of the year race is on the line as well, and it couldn’t be closer heading to Texas.

Quin Houff did not win a race for Spire. Justin Haley won and he competes for Xfinity points.